Saunders calls out Golovkin and Eubank on Arsenal Pitch 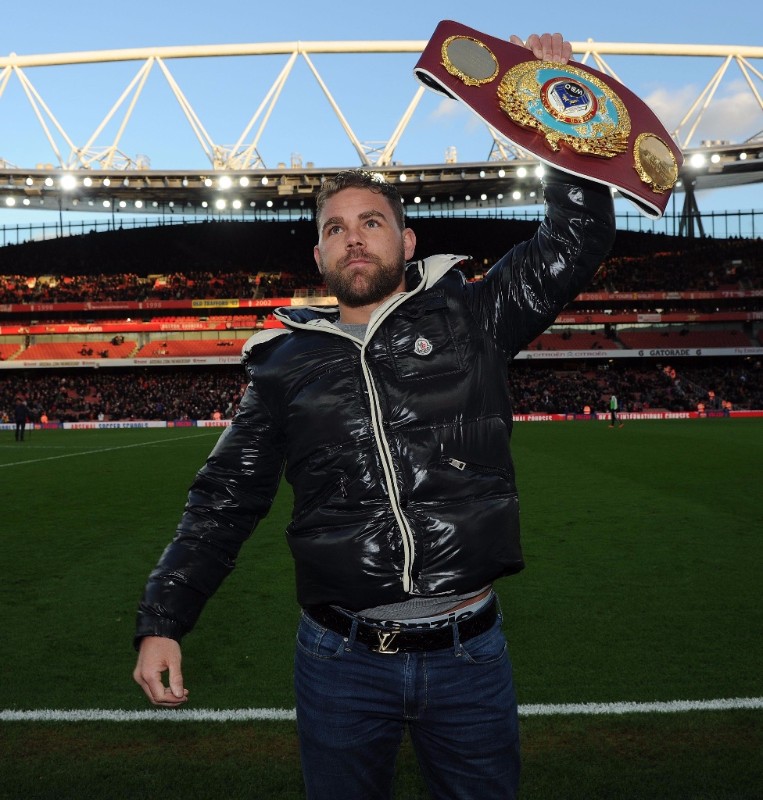 Billy Joe Saunders was thrilled with his reception at Arsenal on Saturday and says the next time he steps on the pitch he wants to be fighting Gennady Golovkin or Chris Eubank Jnr.

The big Gooners fan went on the pitch at half-time for the Burnley game and was given a roaring welcome by the supporters in recognition of his fantastic win over Andy Lee to take the WBO World Middleweight title in December.

Hatfield ace Saunders then sat back and watched his side storm through to the fifth round of the FA Cup with a 2-1 win and continue on their chase for a third successive trophy.

The undefeated 26-year-old says he’d love to fight at the Emirates and his targets would be Kazakhstani terror and IBF, WBC and WBA Super World Middleweight Champion Golovkin or former victim Eubank Jnr who he defeated in November 2014.

“It was a truly unbelievable feeling stepping onto the pitch where my heroes play week in and week out and to get that welcome from the fans made the hairs on the back of my neck stand up,” Said Saunders.

“I’ve been to the ground many times before and previously to Highbury, but this was the first time I’ve been introduced to the crowd and it was a tremendous feeling. I thought that nothing could come close to the amazing feeling I had when I was crowned world champion after beating Lee in Manchester, but last Saturday at Arsenal came very very close to it,”

“The next time I’m here I either want to be playing as Arsenal’s new signing or a more realistic option is to fight Golovkin or Eubank. Golovkin would be an tremendous fight for British boxing. Muhammad Ali fought Henry Cooper at Highbury so in this new millennium what better than a super-unification fight between me and Golovkin? I know he was at West Ham the other week, but the Emirates is the place it has to be at. As for Eubank Jnr, he’s already had his backside kicked by me, what better than me kicking it again in front of 60,000 at Arsenal!”