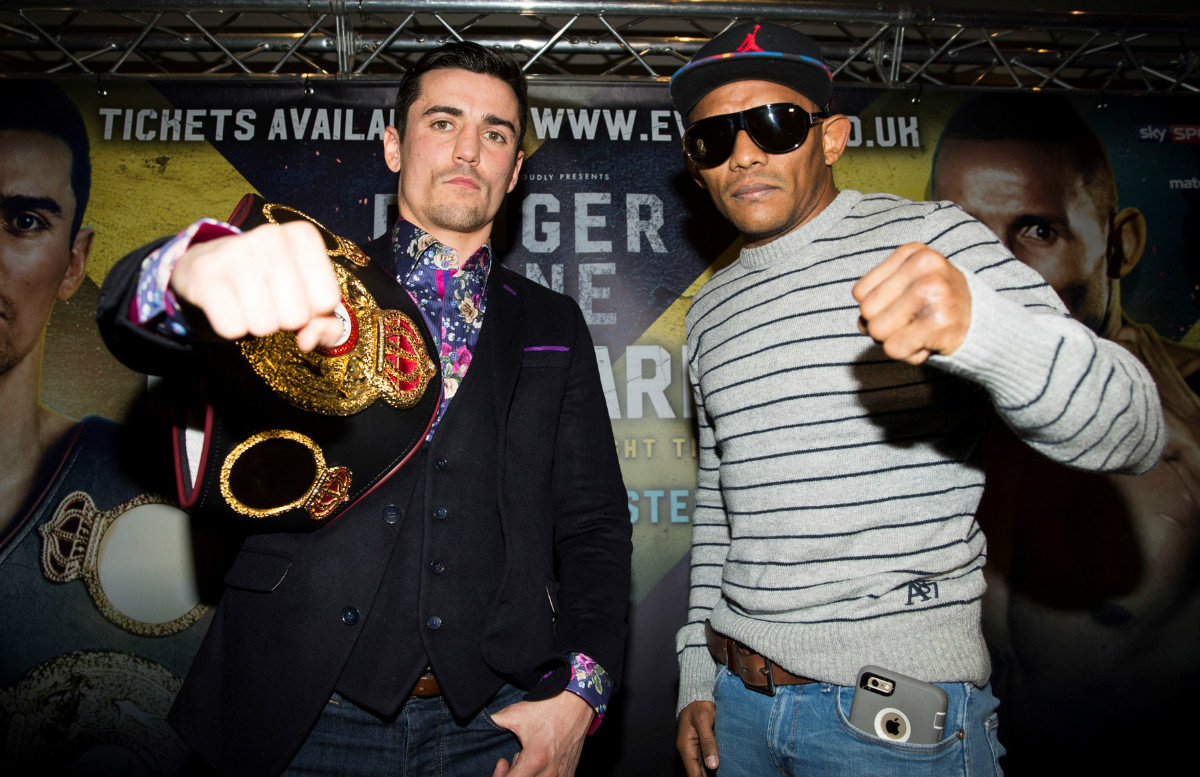 CROLLA: BARROSO IS THE MOST DANGEROUS LIGHTWEIGHT ON THE PLANET

Anthony Crolla says he is taking on the most dangerous Lightweight on the planet when he defends his WBA World title against Ismael Barroso at the Manchester Arena on May 7.

The Manchester hero makes the first defence of the title he won in stunning fashion with a fifth round KO win over Darleys Perez in their rematch in November, and takes on the power-punching Barroso in a chilling test of his credentials as a World ruler.

The unbeaten Venezuelan made it 18 KO wins from 19 fights in the paid ranks with a brutal win over Kevin Mitchell at The O2 in December, a win that landed him the Interim tile and a shot at Crolla.

The champion and challenger met at a press conference in Manchester yesterday and Crolla was quick to pour scorn over both suggestions that he would swerve the dangerous visitor and that he should vacate the title to meet WBO champion Terry Flanagan, with the immediate clash with the mandatory part of the deal to land the rematch with Perez after their controversial first meeting.

“When you work for something so hard and so long, the last thing you want to do is give it up,” said Crolla. “I’d be a fraud if I’d done that when my mandatory is in front of me. It’s the most dangerous fight of my career, I saw him take Kevin out in London and he did it in impressive fashion. They were confident of winning the fight and they did the job, but I saw things in him that I could capitalise on.

“The suggestion that I would duck him got my back up a bit. When you are champion you fight the best challengers out there and that’s what I see in Barroso. I am looking forward to us both putting on a fantastic fight. We know he can bang and that is why everyone avoids him, but I believe I have got the tools to beat him and he’s not taking my belt.”

Barroso is no stranger to packing his gloves and traveling to fights, with his 11 year career taking him to eight countries, and the 33 year old has told Crolla his reign as champion will be short lived.

“My fight with Kevin was good but this will be better,” said Barroso. “You will see two great fighters, and I know Anthony is an excellent champion, but I will take the belt to Venezuela.”

Promoter Eddie Hearn today announced the early details of the undercard, with the return to the ring of two-weight World title challenger Martin Murray as he hunts a showdown with Londoner George Groves, Hull’s Lightweight favourite Tommy Coyle returns to action after injury, Hosea Burton will defend his British Light-Heavyweight title and Manchester Light-Middleweight Marcus Morrison.

“This is going to be a wonderful night in Manchester,” said Hearn. “Anthony’s fight with Ismael is a fantastic one. Ismael is without doubt the most dangerous man in the 135lbs division, but Anthony is not scared of anyone, and he believes that he’s got the goods to beat him and go on to unify the division.