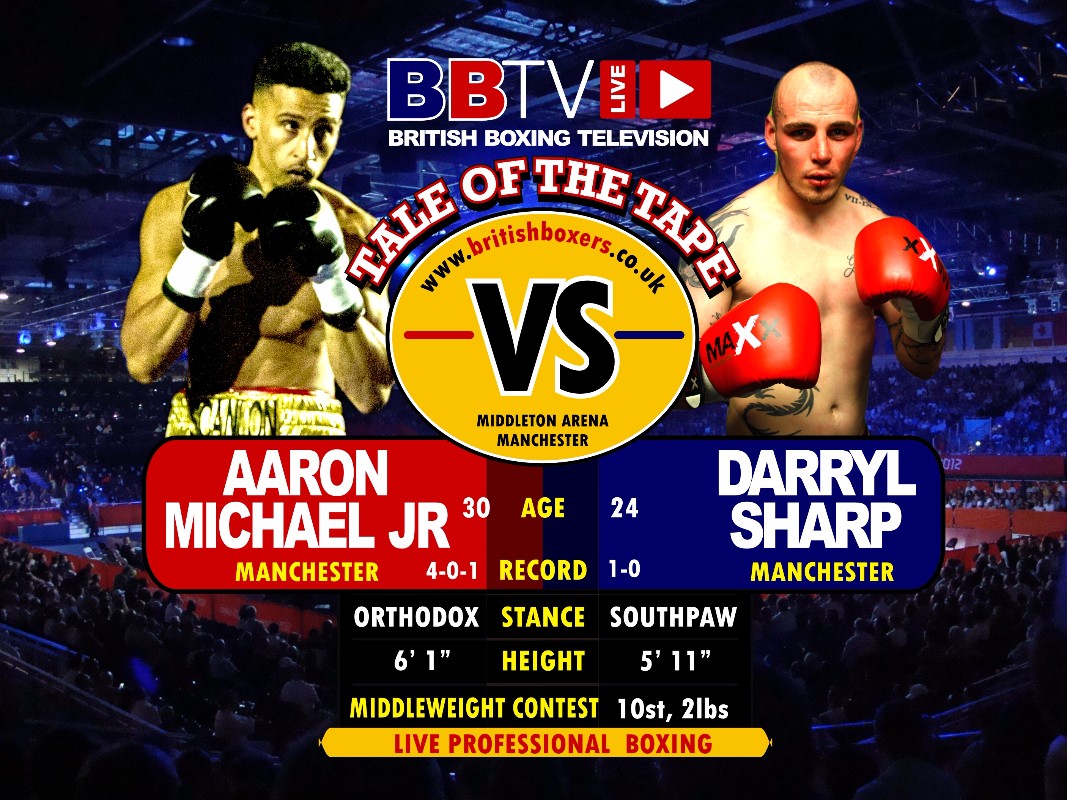 They are both unbeaten prospects with ambition, both from the same town, Middleton in Manchester and live a stones throw away from the Arena they will both square up in this Saturday night, LIVE and FREE to watch on BBTV via britishboxers.co.uk (Subscribe here)

Aaron Michael Jnr, takes on Darryl Sharp in a  intriguing match-up and both are predicting victory in front of the home faithful. Sharp is managed and trained by former Central area champion Kieran Farrell and Aaron Jnr is a product of the Collyhurst and Moston Lads Club and trained by former champion Paulie Da Silva.

Both are new pros unbeaten with ambition to go all the way, matchmaking like this is rarely done these days. Fair play to both lads for getting it on. They have had a few good competitive spars and have big respect for each other but are willing to put their reputations and unbeaten record’s on the line for a great little local derby fight  to excite the Middleton crowd on a great little bill for the weekend brought to you by Black Flash Promotions.

Both boxers spoke today about the fight and were in confident mood of beating the other.

“I’m feeling extremely confident for this fight. I’m fit conditioned and I’ve got a natural ability which gives me a confidence boost.

“I don’t know Darryl well, although people I know do and lads in the gym do. This being a derby gives the fight a bit more of a buzz, especially the crowd knowing it’s two local lads, it makes it more entertaining. Everyone has been asking me about the fight and how well I know him and saying it is going to be a good fight.

“I don’t think he poses any threat to me. I’m faster stronger and like I say I’ve got a natural ability. I know he’ll have a drink in-between fights which I don’t do that. That gives me a physiological boost because a lot of fighters aren’t willing to sacrifice it all.

“I’m extremely confident on winning. I am a winner I train too hard, live strict and I’m made for this.

“I will be looking to box use my skills and boxing brain in the fight. I don’t train hard and live a strict life to have a tear up, this is boxing so I’m gonna box and be victorious and put on a good performance for Middleton.”

“I’m feeling really good for the fight and looking forward to getting in there. I am happy it is a local derby it makes it all the more interesting and has given me a push to train hard and feel well up for it.

“I don’t know Aaron that well really, although people I know well are friends with him, so we are close in that sense but it is a fight and we are both up for it so lets get it on.

“I don’t think Aaron is a real threat to me, I’ve been doing lots of sparring with big hitters and speedy guys and there is nothing we are not ready for, I am confident of getting the win and I am excited for Saturday to come.

“Everyone is talking to me about the fight and it has really caught peoples interest, I didn’t expect to be involved in a fight like this with such interest at this early stage of my career but I’m loving it It will be a good night. I just hope he turns up on the night and doesn’t bottle out!

“You can expect from me on the night to have a high work rate and to dominate Aaron from round one.”

This should be a very good fight, and one ‘0’ has to go, a loss wont be such a bad thing for the loser, but the winner will gain local bragging rights and walk home the happier!

Topping the bill on the night will be local cruiserweight Sam ‘Nowhere2’ Hyde who takes on Lithuanian Rolandas Cesna for the International Challenge belt. Read more..

Zelfa Barrett will have his 9th professional fight against tough Hungarian Aron Szilagyi.

Alex Rutter has a tricky four rounder after a late opponent change, He was originally set to fight face Dean Evans, but will now face Stockport’s game Jamie Quinn.

You can watch all the fight action from Middleton Arena LIVE and FREE on BBTV via www.britishboxers.co.uk – Details…