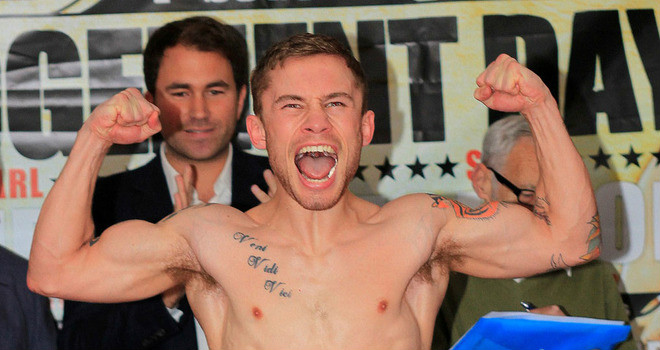 Carl Frampton has agreed to move up in weight to take on WBA featherweight champion Leo Santa Cruz this summer in New York, (with July 25th a likely date, although it hasn’t been confirmed as yet)

Frampton, 26, revealed on Friday via his Twitter that they had signed up for the fight and will attempt to become the first boxer from Northern Ireland to win world titles at two different weights.

Frampton tweeted on Friday: “The Jackal vs @leosantacruz2 for the WBA featherweight title in the big apple late summer! #AndTheNew #TwoWeightWorldChamp.”

The Jackal vs @leosantacruz2 for the WBA featherweight title in the big apple late summer! #AndTheNew #TwoWeightWorldChamp

Frampton’s manager and promoter Barry McGuigan of Cyclone Promotions also confirmed that their man would be taking on Santa Cruz in America, calling the meeting between the two champions, a ‘monster fight’

We have reached an agreement for @RealCFrampton to face @leosantacruz2 in late summer in NYC. Details to follow next week #monsterfight

Frampton, (record: 22-0, 14KOs) the reigning IBF world super-bantamweight champion and also, until recently, he held the WBA version, which he took from Scott Quigg in February, but was later stripped of the title, for failing to agree a defence against mandatory challenger Guillermo Rigondeaux. But it appears, a fight against unbeaten, Mexican born, Southern Californian Santa Cruz (record: 31-0-1, 18KOs) was always in the pipeline.

On the same night Frampton defeated Quigg in Manchester to unify the belts, Santa Cruz stopped Kiko Martinez in the 5th round and afterwards called out Frampton saying.. “Since Frampton won, if he’s ready to go up in weight, I’m ready for him. I challenge him to a fight whenever he’s ready.”

I want to fight the best. Would love to give #boxing fans a fight vs @RealCFrampton this summer. #SantaCruzFrampton pic.twitter.com/BnAg01N7pk

Frampton later on took to Twitter to congratulate Cruz and returned his gesture asking Cruz to face him in summer. hours “Well done to Leo Santa Cruz and commiserations to my friend Kiko Martinez. Fancy a summer showdown ‪@leosantacruz2? I’m ready”.  It appears both have now got their wish.

Santa Cruz, 27, is a formidable foe for Frampton to face, a three-weight world champion this is a real fight! It is a natural progression for Frampton to move upon weight and if he can beat Cruz in America, his stock as one of the best boxers around will rise incredibly. This should be a fantastic fight and one to sign off the boxing season nicely.