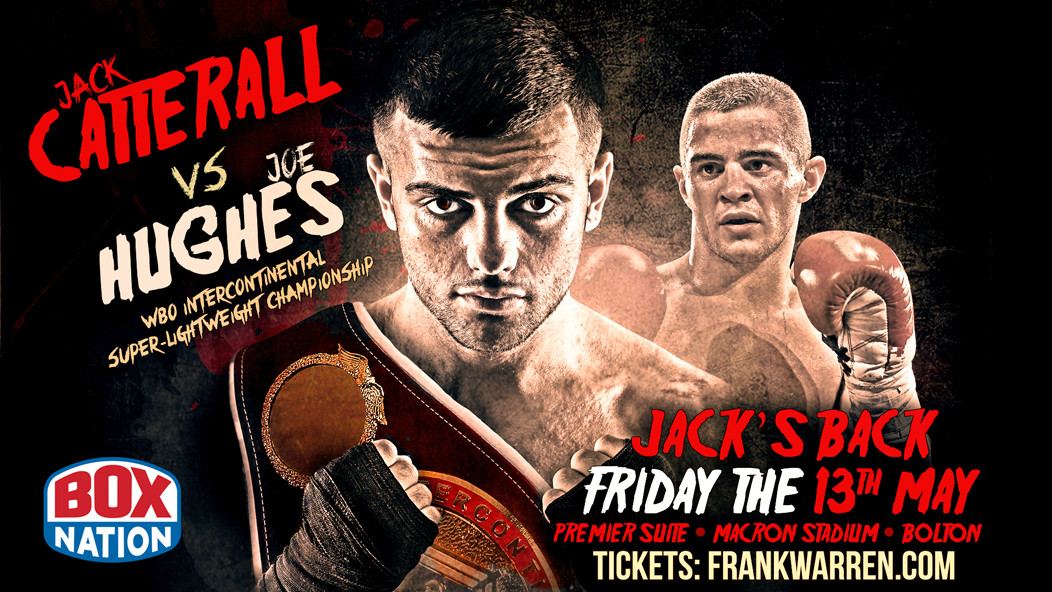 Ice cool Chorley light-welter champion Jack Catterall has a phlegmatic attitude to headlining for the first time – and fronting a live BoxNation card – at the Macron Stadium in Bolton this Friday, writes Glynn Evans.

The bull strong southpaw has racked up 14 straight wins with nine premature endings whilst serving as a supporting act to major promotions in the north-west.

Now the time has arrived for one of the nation’s brightest prospects at any weight to assume top of the bill status. One senses the mature 22 year old is unlikely to suffer stage fright.

‘I’ve really not thought too much about it, just another day at the office, another fight,’ says ‘El Gato’ who defends his WBO lnter-Continental belt against Malmesbury’s ex ABA champion Joe Hughes in what promises to be an high paced, high quality spat.

‘My last ten fights have been in either Liverpool or Manchester so this is a little closer to home and the tickets are a bit cheaper. I’ll have a lot more of my fans there.

‘But I’m particularly excited to be back against a top domestic name who the fans can relate to. That generates more interest.’

The brutal body puncher enjoyed a sparkling 2015 in which he marmalized four imports.

‘2015 was a top year. I had four stiff tests, and remained undefeated. The Finn (12-0 Jarkko Putkonen) took me 10 rounds for the first time and the Mexican (Noe Nunez) was a very live opponent, so it was all good,’ assesses Catterall who also profited from priceless sparring tutorials with Floyd Mayweather and Canelo Alvarez over in the US.

‘I always work hard and live right, that’s my secret. After the New Year, I was straight back in the gym with my trainer-manager Lee Beard, helping Vijender (Singh, the 2008 Olympic medallist and stablemate) and others prepare for fights.

‘I’m my biggest critic. After reviewing each fight on TV, I always think I look shit. I’m never happy so I strip everything down. You can’t practice the basic drills enough. Then, when the Joe Hughes fight was made, we started to construct a game plan and practice stuff specific to him. After five months away, I’m fully fit and ready to fight.’

The showdown with Hughes doubles as a final eliminator for the British 10st title.

‘To be honest, I’ve considered myself the number one British light-welter for a while now,’ claims the stocky 5ft 7in Lancastrian who rose to prominence by smashing Scouse amateur stars Nathan Brough and Tom Stalker in 2014.

‘If I could choose one domestic opponent to face it’d have to be Tyrone Nurse cos he’s got the British title. No one else in the top 10 or 15 motivates me hugely. God willing, when I come through on Friday, I’ll get a shot at that.

‘I’ve watched Tyrone spar. He’s experienced but looks weak at the weight. I’m very confident that it’d just be a matter of time before I broke him down and stopped him.

‘Right now, Joe Hughes is my focus. If, afterwards, I can’t get a straight shot at the British title, I’ll look to continue climbing the rankings to a world title shot.

‘My goals this year are two or three more fights to move me further up the rankings and another belt, British or international. I’ve been studying the European champion (Ruben) Nieto of Spain for a while now and he’d pose no problems. Easy fight.

‘But it’s far more important to me to put good fights on than to chase the British, Commonwealth and European belts. While I’d love a Lonsdale Belt, a world title is my ultimate and I’ll let nothing get in the way of that.’

Catterall’s stone fists and savage body assaults have terminated five of his last six gigs before the cards were called in, catapulting him to the number four slot in the WBO world rankings. A world title call could be imminent but Omaha’s formidable Tertence Crawford cuts an imposing presence on the throne.

‘Like any fighter, if I got the call to fight for a world title, it’d be hard to turn the opportunity down,’ states Catterall.

‘I’d love to share a ring with Crawford but realistically that’s 12 to 18 months away. When my time comes, I’ll be ready for any of them.’

Beautifully balanced in both body and mind, Jack the Lad refuses to be deflected away from the stiff challenge that fellow prospect Joe Hughes will undoubtedly present on Friday evening.

‘Like me, Joe will have had a long camp so we’re expecting that he’ll be very fit and will give me a tough fight. It’s a big opportunity for us BOTH,’ he acknowledges.

‘He’ll likely come forward and force the fight – there’s not much skill and he can’t box back foot – so that should suit me.

‘Regardless, I’ve better skills, a better boxing brain and I’ll be too smart. I’m confident I can adjust to whatever he brings; box my way to victory or, if I feel stronger, take him out in style.

‘I’ll make it as easy as I can to get the win. Points or stoppage, I’ll be happy. He’s just a stepping stone to bigger and better fights.’

Limited tickets for ‘Jack’s Back’ are still available on the night via walk-up.