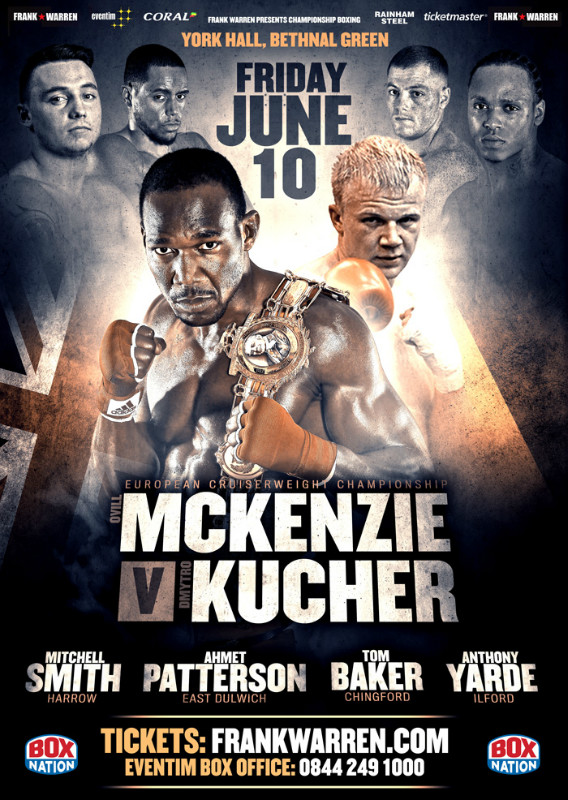 Ovill McKenzie will challenge Dmytro Kucher for the Vacant European Cruiserweight title at the home of boxing York Hall on June 10th.

It’s a big return for the hard-hitting Derby based Jamaican who just missed out on claiming a world title when he pushed IBF ruler Victor Emilio Ramirez to a controversial draw in Argentina last October.

Kucher, from Kiev, Ukraine, has an explosive record of 17 knockouts from 23 wins with only one points loss and draw and has previously held the WBC International Silver Cruiserweight title. This will be his second shot at the European title after he drew against Bilal Laggoune last October for the vacant title.

McKenzie, 36, has previously won a Commonwealth title at light-heavyweight and Commonwealth and British title at cruiserweight, is excited to challenge for the European crown for the first time and sees it as a significant step back onto the world title stage.

“I’m delighted that Queensberry Promotions won the purse bid today and that I’ll be fighting for the prized European title for the first. This a fantastic fight to return back into after the disappointment in Argentina when I should have been crowned world champion. However, that’s in the past and now I want that beautiful European belt around my waist and then look at the world title again. Kucher looks dangerous, but he doesn’t have the experience I have and that will be crucial in this fight”

The undercard will feature a host of top emerging talent including Mitchell Smith, who looks to bounce back after an unexpected first loss against George Jupp, devastating light-heavyweight prospect Anthony Yarde, and super-welterweight slickster Ahmet Patterson who prepares for a mandated showdown with British and Commonwealth Champion Liam Williams.

Tickets are available at Eventim.co.uk at prices £40 and £60.