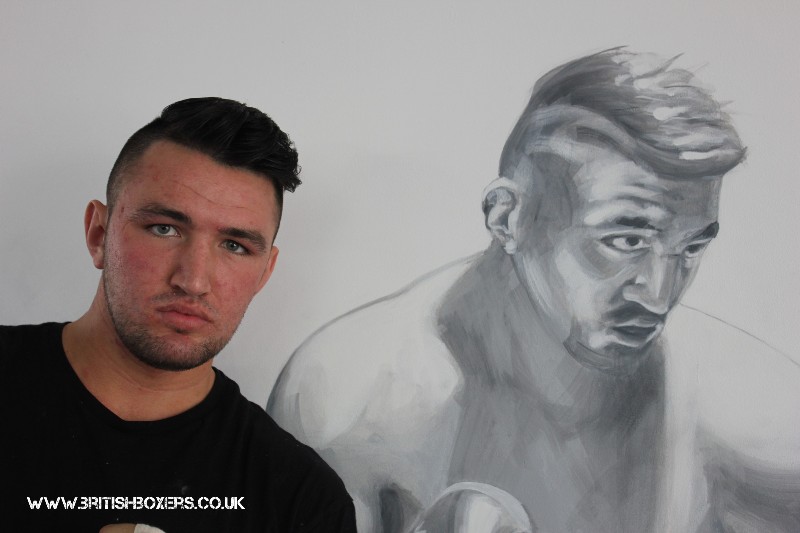 With the heavyweight division eagerly awaiting a colossal rematch between Tyson Fury and Wladimir Klitschko, another Fury is quietly making his way up the rankings.

Hughie Fury, the 21 year old cousin of champion Tyson, is still undefeated and claimed the WBO intercontinental title on Saturday night via a technical decision against Big Fred Kassi. The younger Fury is gaining a reputation as a future prospect and still has much to learn under the tutorage of his father Peter Fury who also trains Tyson.

Standing at 6ft 6 inches (198cms) and weighing around 230 lbs, Hughie Fury (20-0-0 10 KOs) certainly has the frame for the division and, rather more scarily, is still growing. He has speed and power in both hands and is only going to get stronger and more ring smart as his career progresses. His cousin, Tyson, is tipping the younger Fury to conquer the division after his own retirement and although he may not be a household name, like Deontay Wilder or Joshua or even New Zealander Joseph Parker, he surely has to be recognised as a future contender.

There are similarities between Tyson and Hughie aplenty. Both have good jabs, great footwork and a confident demeanour once the bell tolls. Some may even suggest that Hughie has a smoother and more fluid style although his power still has to be developed but it will naturally come with experience and time. Both fighters, and all Team Fury fighters as a whole, are trained to be fast and intelligent. This is the key factor that certifies a Peter Fury trained fighter.

Whilst Tyson is now at the peak of the division he can look forward to his rematch with Wladimir and a possible future unification fight with Anthony Joshua, Hughie is looking to challenge those tricky and highly avoided adversaries. Fred Kassi was and still is such a fighter. He took Dominic Breazeale and Chris Arreola the distance in his previous 2 fights and arguably could’ve got the decision in either. Breazeale (17-0-0 15KOs) is next to challenge the IBF champion, Joshua, in London. Hughie, who is 9 years younger than Breazeale, was ahead on all the judges’ scorecards against Kassi and even though both himself and his trainer say his performance wasn’t the best, he still had far more in his locker than Kassi or his recent opponents have brought into the ring.

Many believe that at 21 years of age he should still be an amateur and nowhere near the pro ranks. It is also worth bearing in mind that Hughie had an 11 month layoff due to food intolerances that were effecting his health as well as his boxing skills. Fast forward 12 months and he is crowned WBO intercontinental champion. Many would like to see him fast tracked onto the bigger stage but his father and trainer has publicly stated that he needs the rounds and experience to keep growing.

The Fury camp are definitely not a fan of the so-called ‘inflated’ records of Joshua and Wilder and are more than happy for their fighter to continue up the ranking fighting the trickier, cunning and highly evaded pugilists. In Hughie’s own words he’s more than happy with this plan: “I’m taking fights nobody else is taking, the ones people avoid because they make you look bad. I want these type of fights because when I know I’m fighting for a world title, I’ll know to expect everything. That’s what I’m going for this year – good fights, and if a good opportunity comes along, I’ll take it.” said Fury.

Whilst we don’t want to rush his development, we are yearning to see him against a well-known name. David Price, Dereck Chisora and Manuel Charr would be interesting fights to see but would any other those boxers risk the fight? If a 30 year old contender loses to a 21 year old rising star it might be curtains for their careers and title shot. Team Fury will keep on knocking the doors of the top ten fighters and with his ranking beginning to take flight perhaps it will only be a matter of time before we see another Fury on the cusp of a world title.

With the heavyweight division still looking wide open, after the current crop of champions make way, the likes of Hughie, Parker and Joshua are all next in line to conquer. Does this mean we will have to wait for them to face each other? Probably, but if Hughie had his way the Joshua fight would happen sooner rather than later. He was actually offered the fight with just 4 week’s notice last year but the camp turned Eddie Hearns approach down as this was not adequate time for sufficient sparring. The Joshua camp know that Hughie is on the rise and possibly tried to coax him into a fight sooner rather than later but Team Fury are an astute bunch who are creating a legacy for the 21 year old without the millions of pounds being invested in Joshua by Matchroom boxing and its leader, Eddie Hearn.

Team Fury still doesn’t have the world wide recognition that they deserve but with Hughie, they may just have a star in the making. As the worlds press gathers around Tyson and Wladimir another Fury will be in training for his next fight against another unheralded but dangerous opponent, waiting and biding his time until the mandatory challenger door opens for the next British heavyweight sensation.