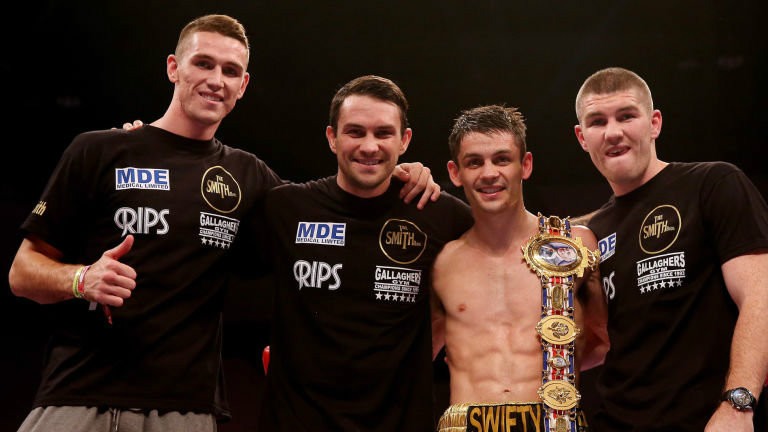 Three wins for the Smith brothers on Bellew undercard

All three brothers picked up wins on a special evening of action that saw Bellew crowned WBC world cruiserweight champion, after knocking-out Ilunga Makabu the 3rd round.

Former British champion, Lonsdale belt winner outright, and two time world title challenger Paul Smith the oldest of the fighting siblings, had a routine keep busy six-round points win over Polish journeyman Bartlomiej Grafka, it was his 2nd victory in a month as he plots his way to another world title shot.

Stephen Smith, 30, scored an impressive 7th round stoppage over the tough Daniel Brizuela to claim the WBC silver super-featherweight title and put himself back in the top end of the world rankings as he too seeks another crack at a world title. ‘Swifty’ lost his one and only world title challenge when he was outpointed in America by IBF champion Jose Pedraza in his last fight in April.

Brizuela has been on these shores before to take on Brits Luke Campbell and Tommy Coyle. His fight against Coyle will go down as one of the most entertaining fights of the modern era. – But Smith was in no mood to give Brizuela anytime to settle and get into the fight and he took control with a good jab, movement and punished his man to the body which eventually slowed him down. – Smith continued to come on strong throughout the fight and dropped Brizuela twice before the referee called the fight off.

The youngest, and some say most naturally gifted of the brothers Callum Smith, is already a British, Commonwealth and European champion and the No1 challenger for Badou Jack’s WBC super-middleweight title, but on Sunday he had the toughest night out of the three and was made to work hard for his victory against rugged Argentinian Cesar Reynoso before scoring a 6th-round stoppage.

Smith had his opponent over in the first round from a nice left hook and it appeared he may finish the job early. But Reynoso looked happy to be in England and fighting in the spectacular spring setting at Everton and got up to take the fight to Smith and really give it a go.

Callum towered over Reynoso but it took him sometime to get to grips with him and Smith seemed to grow frustrated as the rounds went on and he failed to finish the job. He was looking to end the job early and in doing so was guilty of forcing his work. Reynoso was to have his own success and bloodied ‘Mundo’s’ nose with some looping unorthodox shots. – Callum had the visitor on the canvas again in the 4th after a good body shot got in.

Another body shot put Reynoso down again in the 5th, but still he refused to go without a fight. Callum eventually found his finishing rhythm and turned the key landing a barrage of shots unanswered, that forced the referee to jump in and stop the fight. – It wasn’t classic ‘Mundo’ considering his last few performances, but he got the job done and moves on to some big fights in the coming years.

The fourth boxing brother in the family, Liam Smith, the current WBO world super-welterweight champion, cheered the other three on from ringside. He will make his next appearance when he defends his title against Montinegroes Predrag Radosevic on June 4th at the Echo Arena in Liverpool.