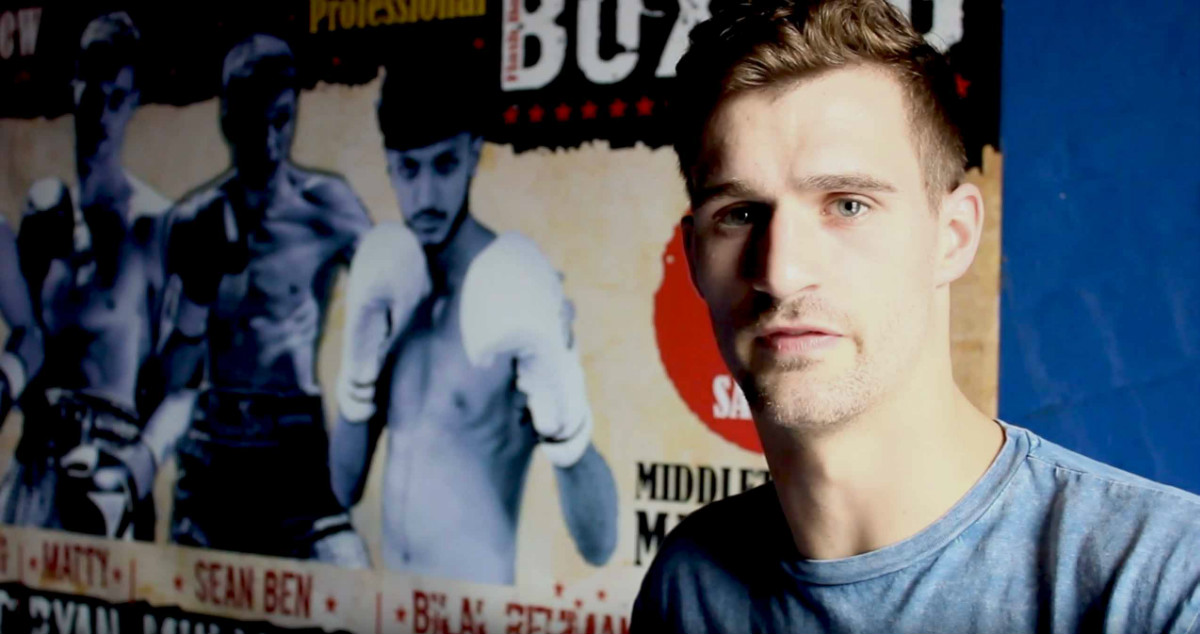 The only professional boxing show taking place in the UK this Saturday is in Oldham!

Middleton’s ‘Mighty’ Matthew Ryan fights for his first professional title on Saturday night (July 2) at the Oldham Leisure Centre, when he takes on Sam Wall for the Super-welterweight Challenge belt on the joint Black Flash and VIP Promotions show.

Ryan has dreams of lifting a British title belt down the line and knows this is just a step in that direction. After some good wins over the last year, the Collyhurst and Moston fighter is ready to step up and chase the big fights and titles as he looks to storm the division and take on the best.

“I’m looking forward to Saturday’s fight and lifting that belt above my head. To be honest it is something I want to win to dedicate to my family, friends and supporters who have been coming and supporting me from the start.

“The support for me has been amazing, my home town of Middleton have got behind me and this will go some way towards thanking them. I plan to put on a very good performance and bring to the ring the form I’ve been showing in the gym.

“I’m the fittest I’ve ever been, I feel stronger than ever and I am getting better all the time. I love boxing and I give it my all. I still also work part-time as a security guard at my local Tesco store, so I manage my time between work and boxing and at the moment I’m able to do that.

“My plan is to aim for the very top, World titles, you have to have an ultimate ambition. But I love the British title too. That Lonsdale belt is beautiful, the best belt in boxing and if I get a chance to challenge for it, that would be for my Dad who passed away and for my coaches Pat (Barrett) and Paulie (DaSilva) who have helped me and are always there for me and my amateur coach Martin Lynch where it all began for me.

“But one fight at a time, let’s get Saturday’s fight out of the way, then I can think of the future. I’m not underestimating Sam, he is a decent fighter who is always capable of scoring an upset, so I have to stay switched on and box to the best of my ability, I know I am an handful for anybody when I do and I’m looking for a big win on Saturday.”

In a fight that could easily have topped any bill on its own, British middleweight contender Mark Thompson will take on William Warburton in a rematch of there entertaining fight last year.Thompson is working his way back up the rankings and is looking to get another shot at the British title, after losing to Liam Smith when challenging for it in 2013. Thompson is a class boxer and always puts in a good shift. Against Warburton this time and he can expect a tougher fight than last time and make no mistake.

Warburton is coming in on the back of a two fight winning streak and is looking to upset the apple cart and fulfil his own title ambitions. Warburton is one of them boxers who fights every week, win, lose or draw he picks up his purse on the road. But recently he has decided to go on a title hunt of his own and he knows a shock win against Thompson would push him in position, which makes him a threat to Thompson ambitions and this will make a good fight.

Barrett, 22, (pic above) is one of the most talked about prospects in British boxing at the moment after blazing his way to 10-0 in just over a year. He has shown speed, skill and power in his fights so far and brings a star quality and buzz to any fight card he appears. – Watch out for this kid!

A potential fight of the night is in store when Chris ‘Fat Boy’ Monaghan and Darryl ‘Razor’ Sharp meet in a local Mancunian derby at super-welterweight. The unbeaten Monaghan (4-0) is the favourite going in, but Sharp (2-7) is a boxer with his own ambitions and is a dangerous opponent when on form. He upset the highly regarded prospect Adam Ismail last month, taking his unbeaten record and he is determined to cause another upset in Oldham at the expense of Monaghan.

Hyde’s Lyndon ‘Lights Out’ Newman will make a return to the ring after taking three years out due to family reasons. The popular one time prospect has decided to give boxing another crack and has been given the opportunity by Black Flash Promotions after he started training at the Collyhurst and Moston Boxing Club with Pat Barrett recently. Newman has a new lease of life and looking to make a statement in this second faze of his career.

Unbeaten Manchester prospect Dale ‘Canelo’ Coyne, a gym mate of world champion Terry Flanagan, is keeping busy and after fighting last month, he is back in again this weekend after being added to this stella card.

Manchester based Lithuanian Mindaugas Baublys makes his professional debut and Dublin’s top prospect Philip Sutcliffe Jnr. travels over to Manchester to make a very welcome addition to the bill.

Tickets for the show are priced at £35 unreserved and £60 Ringside and can be purchased here: >