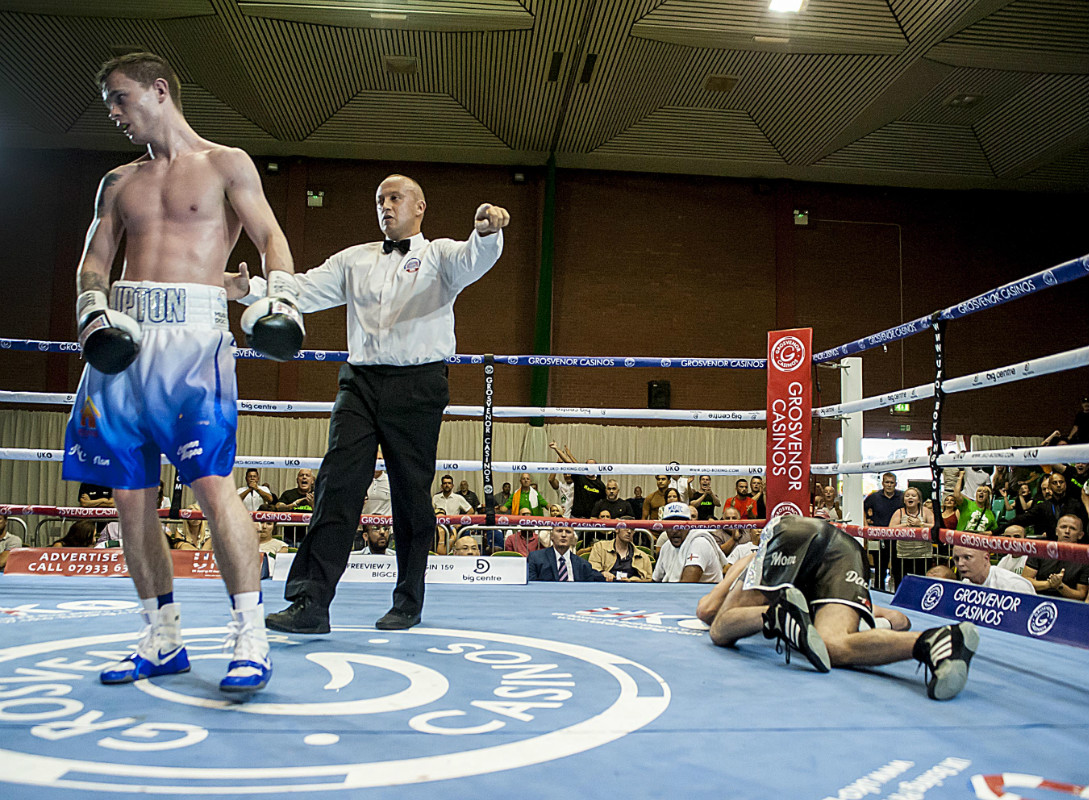 Anthony Upton became the second member of the Upton Clan to hold a national title following a stunning display against Luke Paddock in Cannock on Sunday afternoon.

The 24-year-old, who is trained by boxing legend Ricky Hatton, won the vacant English super-lightweight crown with a hellacious left cross 34 seconds into the ninth round.

It was a text book shot that rocked Paddock down to his boots and sent him crashing to the canvas.
The Bloxwich man did get back to his feet, but was unsteady and referee John Latham correctly waved it off.

The victory follows on from Anthony’s older brother Pauly being crowned Irish super-welterweight champion in April.

“It’s unbelievable. When I saw him shake his head and say he couldn’t continue I was so happy I dropped to my knees because no one sees how much effort boxers put in and how much It means,” Anthony, now 13-1 (5 KOs), said.

“I’ve spent nine weeks away from my family and I missed them dearly and now it’s paid off.

“I was trying to get him (Paddock) with that punch a lot. I kept overdoing it and missing.

“I knew he’d lean in with his shots, but I was too far away. Ricky told me not to stand too far apart from him because all I needed was an inch more and I did what Ricky told me, tagged Luke and he went down.”

He added: “Full respect to Luke Paddock. He’s a great fighter and good luck to him in the future.”

On the undercard, Anthony’s other punching sibling, Sonny, warmed up for his own English title opportunity by seeing off Atherton danger man William Warburton over eight rounds.

Sonny will now box Ben Hall for the vacant super-welterweight strap on a Frank Warren show in the Autumn.

Also in action from the Hatton stable were unbeaten prospects Reuben Arrowsmith and Sam Evans.

Evans stretched his record to 5-0 by outboxing Kevin McCauley over six rounds, while Arrowsmith used devastating uppercuts to drop and then stop Latvian southpaw Viktors Drizlionoks inside three rounds.