Sean Lewis tells Adam Ismail: “I am here to knock heads off!” 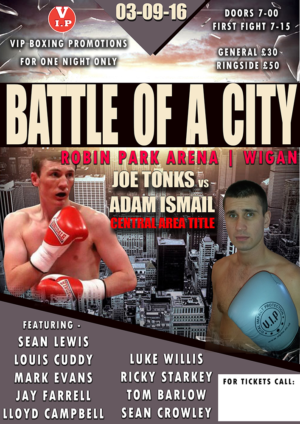 After getting a late invite to the party, Sean Lewis is convinced he can gatecrash the main event and come away with the Central Area welterweight title, when he faces Adam Ismail at Wigan’s Robin Park Centre on September 3.

Liverpool’s Ismail was due to face Joe Tonks for the vacant belt in an intriguing Scouse derby fight. With Tonks out injured, Lewis steps into the role and—set to appear on the bill anyway—says he will make the most of his golden opportunity.

“I’m made up,” said the 27-year-old. “I found out the other day and have just been waiting on the Board to approve it. I’ve been waking up every morning, looking to see if Steve [Wood] had been in touch! It’s time to take the bull by the horns and bring the title back to Birkenhead.”

With a defeat and a draw from seven outings, Birkenhead’s Lewis is slightly less experienced than his 10-fight (one loss) rival. But the ‘Ginger Mexican’ is promising to rough up rangy boxer Ismail, and fight ugly to get the result.

“I’ve been in the gym since my last fight and only had two days off, so I’m prepared and ready. It’s a last minute change [of opponent] but it doesn’t matter, and it’s a last-minute change for him as well. I’m happy with what I can do and I’ll show it on the night.

“Adam’s a good boxer; he’s a bit like the lad [Nathon Smith] I was meant to fight on this show but Ismail’s a southpaw. He’s a stand-off boxer, he likes to have space and throw his shots, but I’m not like that. Joe Tonks is a good boxer, so a fight between them would have been a nice, good-looking fight. I’m going to bring something different; this fight is going to be messy and scrappy. I’m there for a fight, I’m not there to look pretty, I’m there to knock heads off.

“I’m getting the result and will be bringing that title back to Birkenhead. Since Masher [Dodd] has won his WBC title, we breed success in Birkenhead and I’m the next one in line.”

Promoter Steve Wood said: “It’s a shame for Joe Tonks that injury has forced him off the show, but credit to Sean for stepping in at late notice. It’s a great opportunity for him, a chance to pick up a title and move his career on, just like VIP team mate ‘Masher’ Dodds. Sean has a totally different style to Tonks too, so it will be interesting to see how Adam handles the situation. Tonks versus Ismail would have been a good one to watch but this one may be even better.

“Jack Arnfield was originally on the undercard but we’ve managed to get him a shot at John Ryder and the WBA International middleweight title, so he’s now off. But we’ve replaced him with top Northern Irish prospect Anthony Cacace who is 13-0 and very exciting to watch. This will be a good first show of the season for VIP Promotions, and can be seen free on vipboxing.tv for anyone who can’t make it.”