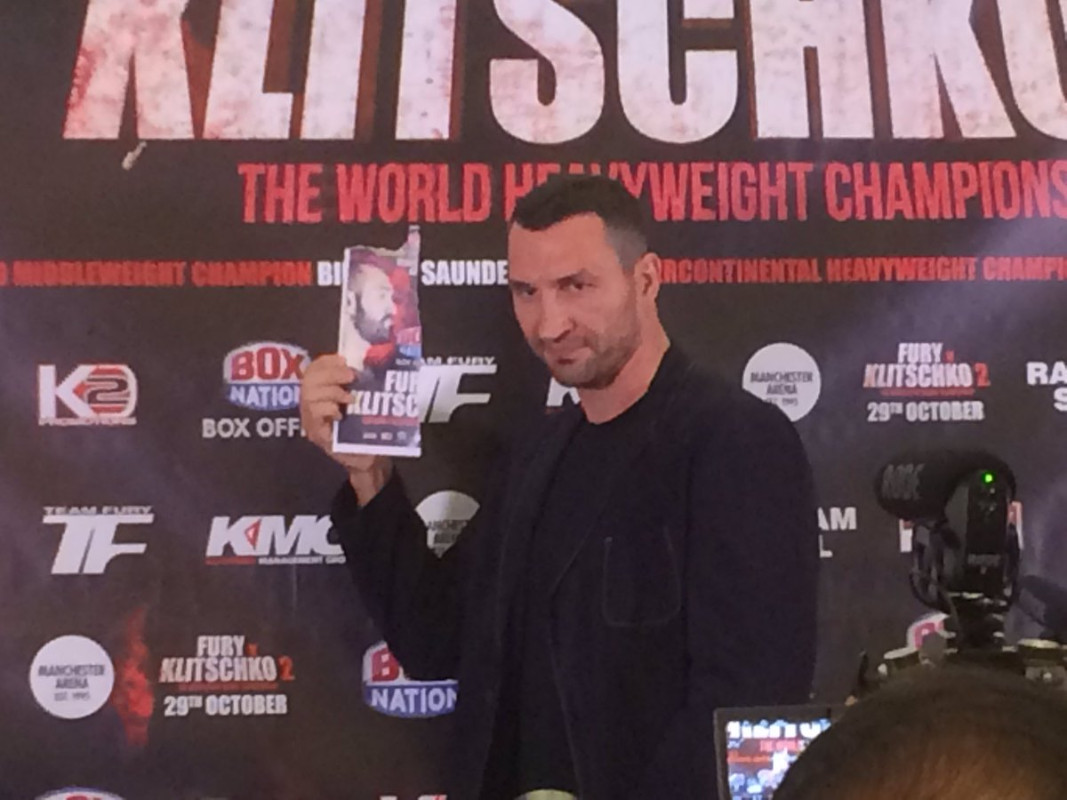 “Apologies for Tyson not attending,” stated Mick Hennessy, his manager. “His phone battery is gone, so all we know is that he’s had problems with traffic and the car he was in broke down. Tyson is normally early for press conferences, he’s the most entertaining person at press conferences worldwide. This is not the norm and we’re not making it up.”

With Fury stuck en route, Peter Fury, his uncle and trainer, took to the dais to talk about the rematch and quell any fears that his nephew’s absence may have raised. “He’s training two times a day,” he said. “There’s not much I can say. We’re looking forward to the fight. Apologies that he’s not here.

“It will be a different fight to the last one because Wladimir knows he has to do things differently. Tyson knows he has to do things differently to accommodate what’s coming at him. That’s why this is a lot more interesting. When you look at history, when you see a hell of a good fight first time you get a down fight the second time. The first one was a chess match, but on a boxing level it was a masterclass.

“This time, both fighters know what they’ve got to do. Wladimir knows he has got to be different to get his belts back. It makes for a mouthwatering fight. We’re looking forward to it. We’re finally here and very happy to be here.”

“I am obsessed with getting the titles back, I want the best Fury and to beat the best Fury,” said Klitschko. “Trust me, I’m really looking forward to this fight. I’m fighting in Fury’s backyard and love it.”

He added: “My actions will do my talking for me.”

The fight seemed in trouble when news filtered through of a UKAD ban for both Tyson and his cousin Hughie Fury, Peter’s son, over a doping issue. They both tested for traces of nandrolone only for the B tests to come back negative. The temporary bans were lifted following a threat of legal action from Fury’s representatives.

“There’s been chaos around this fight,” said Fury when speaking about the issue. “UKAD were slipping statements out to the public and it shouldn’t have happened. People were assumed guilty before it had been proven. I am relieved we can get on and have the fight.”

He added: “Tyson is upset with the way he’s been treated by the British public. I explained to him he has to accept that, he knows what the truth is and that should be enough. It will come out.”

As previously reported, George Warren also revealed that the fight will be available for non-subscribers to BoxNation via the Sky Sports Box Office platform. Click the link above for more information.