VIDEO: Golovkin on Brook – “He’s my biggest fight and my biggest challenge.” 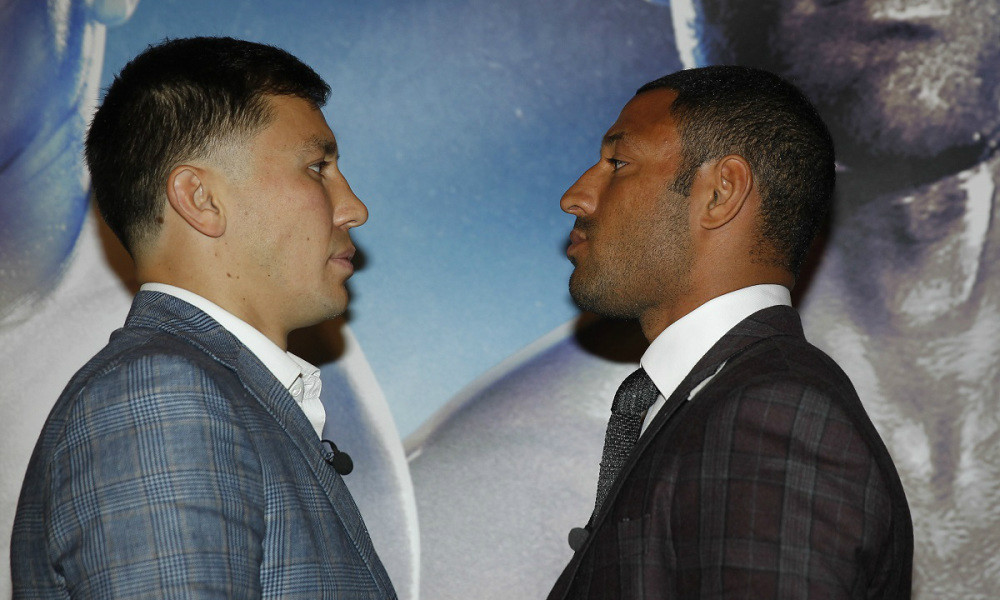 Undisputed middleweight champion Gennady ‘GGG’ Golovkin (35-0, 32KOs) says he is expecting the biggest challenge of his career when he defends his belts against Britain’s Kell Brook (36-0, 25KOs) on Saturday night at the O2 Arena in London.

Golovkin was also very surprised with the physical presence of IBF welterweight champion Brook, who weighed in 176lbs at the 30 day check weigh in last week, five pounds heavier than Golovkin who was only 165lbs. Brook retained the same weight advantage at the 7 day check weight.

Brook, is jumping up two weight divisions to face one of the most feared big punching boxers in the sport, but looks to have grown into the weight class well and looks strong fit and healthy and it hasn’t gone un-noticed on the defending champion.

“He came in a month before the fight at 176 pounds and then 167 pounds. My weight has been 165 or 163 but he’s huge. He looks good. He looks strong and big. It’s interesting. It’s very serious and it’s a huge fight.” said Golovkin.

“My first question to my coach was about Brook having different speed but he said no – just different size, different power and different timing. I thought ‘Wow’. It’s interesting. He’s my biggest fight and my biggest challenge. It’s my biggest step. UK fans are huge and crazy. I like the atmosphere.

“I feel great. I feel it’s time to fight. I have two or three days and then I’ll be feeling ready, 100%. I have to thank my coach, Abel Sanchez, who brought a new strategy for this. It feels great. I feel different and I feel good.

“I have a different plan and a more serious plan. Kell is a great fighter and I respect him. He’s an undefeated champion from the UK with a great record. I understand it’s not an easy fight for us so I’m more serious and more focused.”

Watch the full interview with Golovkin on the above video.