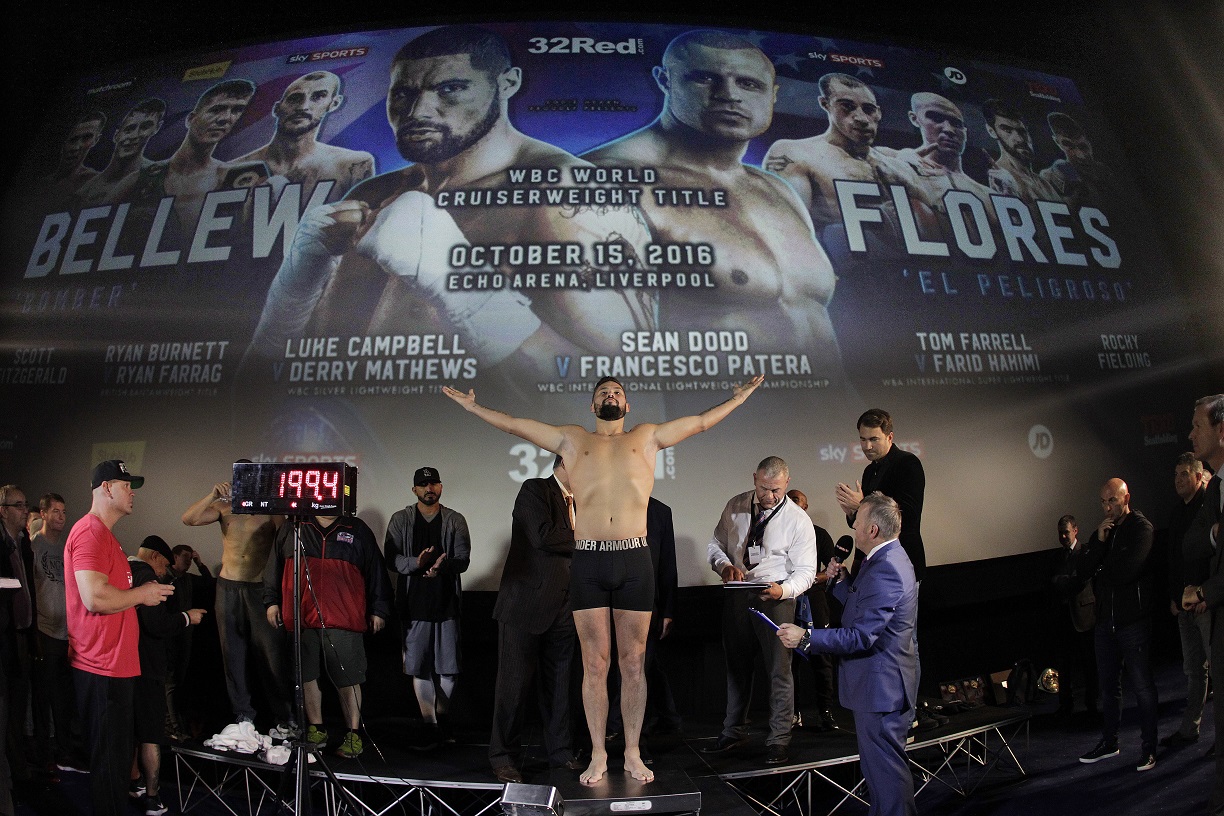 BELLEW: I KNOW HOW DESPERATE FLORES IS – BUT IT’S NOT ENOUGH

Tony Bellew says B.J. Flores is a danger to his WBC World Cruiserweight crown as the challenger is in the last chance saloon – but vowed to KO him in the first defence of his strap at the Echo Arena in Liverpool, live on Sky Sports.

Bellew landed the strap with a brutal KO win in May over Ilunga Makabu at Goodison Park in a fight that he said was his final crack at landing a World crown after two failed attempts at Light-Heavyweight.

Flores’ only two losses have come on points in World title clashes – Danny Green for the IBO crown in November 2010 and Beibut Shumenov for the interim WBA Strap in July 2015. The 37 year old has admitted that defeat would all but spell the end of his ambitions at the elite level, and although Bellew knows that feeling all too well, he’s ready to use his ‘freaky power’ to destroy the dreams of ‘El Peligroso’.

“He’s in the last chance saloon so I know what’s going through his mind,” said Bellew, who hit the scales at 14st 3lbs 4oz – one ounce more than Flores.

“He’s telling himself that he’s going to wipe the floor with me, that he cannot lose this fight. But what he fails to recognise is, you cannot build up the fortitude or mental toughness in ten weeks that I’ve built up in 20 years. I’ve been doing it the right way for 20 years, he’s been doing it the right way for ten weeks. He doesn’t live the life I do.

“A well-respected American boxer and broadcaster said to me recently the best way to describe Flores is he’s a good tough fighter, but he’s a boxer that’s always wanted to be a movie star. He can box, but he wants to be an actor and if you look at his career, that makes perfect sense. He just wants to take selfies with stars than work on his career. He’s a clown and I am going to expose him.

“He said that he’s going to show me what he’s all about in round one, well, if he does that he’s not going to see round two because he will be asleep. If I connect with any Heavyweight or Cruiserweight in the world, I hurt you. I don’t care how big you are, I have this freaky power, I don’t know where it’s from because I am just this fat-skinny guy that can box a bit. I’m not the biggest or the strongest or fastest or best, but I can put people to sleep and it’s a gift.”