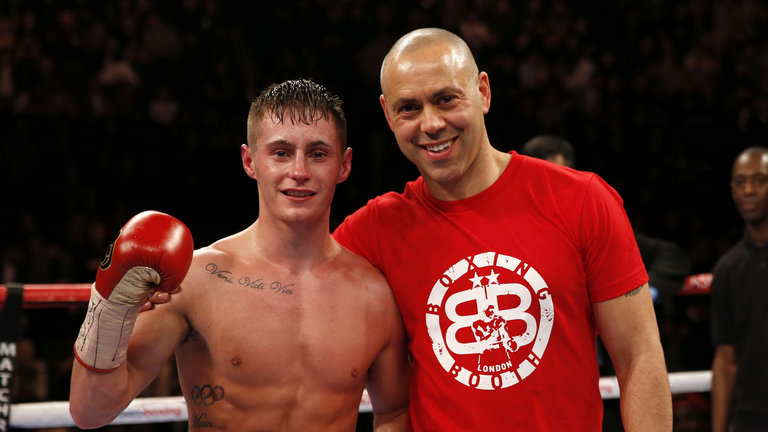 The value of the pound sterling may have taken a tumble in the volatile world financial markets in recent months, but Belfast’s rising undefeated bantamweight star, Ryan Burnett stocks are soaring as he put on a class performance at the Echo Arena, Liverpool on Saturday night.

The North Belfast fighter, ranked # 12 in the WBC ratings remains on course to get into world title contention in 2017.The fledging career of the young prospect has taken off after teaming up with Matchroom Boxing 12 months ago.

Burnett managed and trained by Adam Booth went into the lion’s den to defend his British bantamweight title against the hometown fighter Ryan Farrag who was backed by a partisan crowd.

The fight posed risks for both fighters when it was made; a step up for the young Burnett to face a former European Champion with plenty of experience and for Farrag a fight he could not afford to lose if he wanted to get his career back on track.

The stage was set by promoter Matchroom Boxing on Sky TV for an epic battle of the bantamweights and both fighters did not disappoint.

From the opening bell both fighters were engaged trading blows and both having their successes. As the fight developed the quality work was coming from the hungry Belfast boxer, but Farrag continued to battle and was not going to lie down.

Burnett varied his work using his boxing skills and countering and then switching to an aggressive style slugging it out in a toe to toe encounter with the Liverpudian.

In the middle rounds Burnett stepped up the pace and targeted Farrag’s body with wounding hooks trying to deter the game Farrag.

Although Farrag dug deep by absorbing hurtful punches and retaliating with shots of his own the Belfast man controlled the action by showing steel and dominating the rounds. In the championship rounds Burnett wanting to put on a show going down the stretch landed the greater number of punches.

Burnett a smart slick boxer moves to 15:0. His dominant performance revealed another side of his armoury that he has the bottle to mix it in a fight and come out tops.

After the fight Burnett commented ‘This was a fight I wanted, a bit of a tear up to bring out the best in me and entertain the fans. I really enjoyed the fight, I was challenged and I showed I could handle the pressure and dominate when the going got tough.”