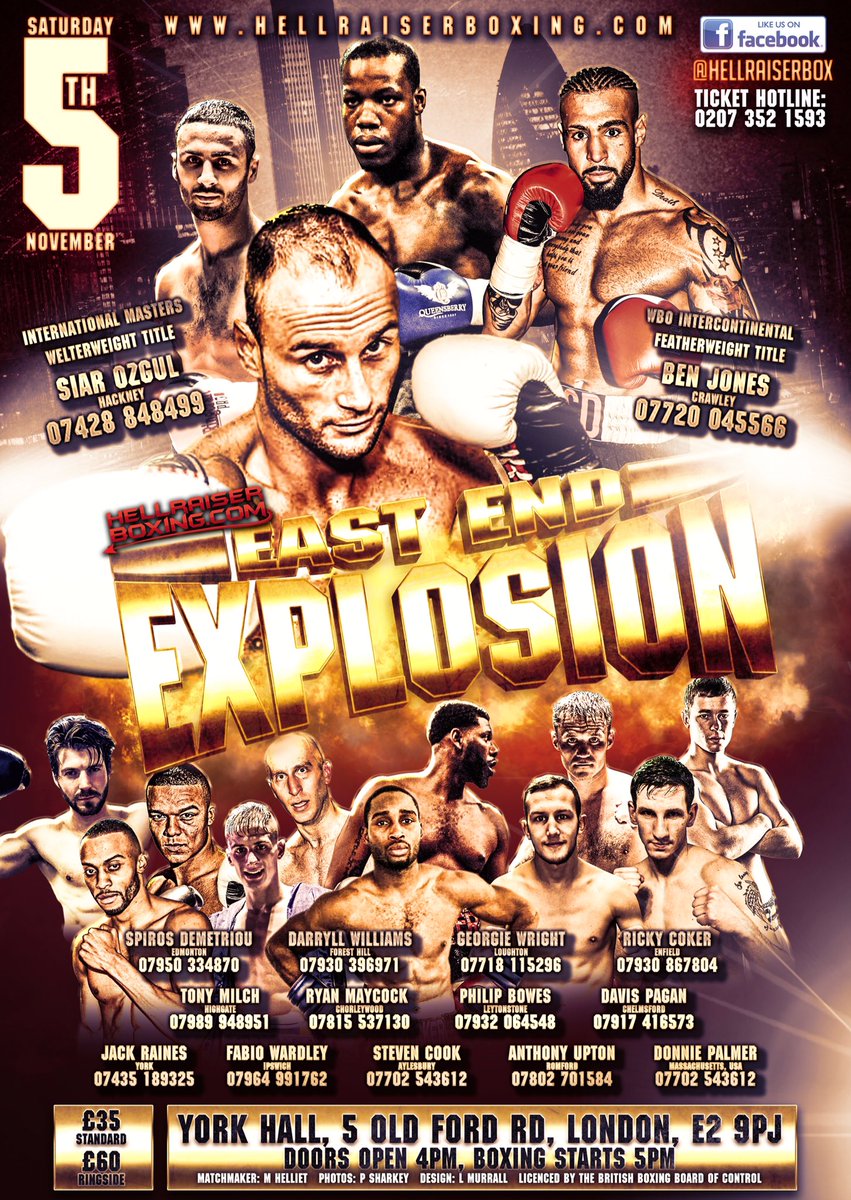 Ben Jones (now 22-5-1), Britain’s WBO Inter-Continental featherweight champion, stayed busy on this Hellraiser Promotions bill by outpointing tough Nicaraguan Carlos Osorio (13-6) over ten rounds. Jones, who was last out in April, racked up the early sessions comfortably enough, with a good jab and left hook to the body being his shots of choice, while Osorio, although willing, was unable to find his range against the sleeker and busier man from Crawley. The quick pace slowed a little in the middle rounds, with Jones continuing to find the target with strong lefts and uppercuts but neither man showed any sign of being able to put the other away. Jones did score a knockdown in the 8th round thanks to an overhand right, but he was helped by Osorio slipping on the advertisement boards placed around the ring.

Nevertheless, Jones’ tail was now up, and a busy work rate and ensured the final few rounds went to the hometown man to earn him a points win of 100-90 from referee Lee Cook. I had the score 100-89, including the knockdown. At 34, Jones might want to move quickly to take advantage of the domestic options at featherweight, but on this night, he looked in fine condition in beating an opponent who, despite having only boxed once on foreign soil, proved good value for money.

The chief support was a bout between Siar Ozgul now (11-0) and Ivan Godor (17-41-4) for the obscure International Classic Challenge welterweight belt, over 8 rounds. The lightly regarded title did little to encourage Godor to provide much in the way of stout competition, choosing instead to tie Ozgul up whenever the champion looked to take control. The first three rounds were scrappy as a consequence, with Ozgul throwing hooks to the body in an attempt to engage the Slovakian but to no avail. By the fourth the referee had had enough, deducting a point from Godor for holding.

Now out of options, Godor was on the retreat, and was dropped by an uppercut around a minute into the fifth. He came up from the canvas but was soon dropped again by a straight right hand, and the count was waived much to the gratitude of the crowd. Ozgul, with the second KO of his pro career, now hopes he has done enough to earn a shot at the Southern Area welterweight belt currently held by London-based Irishman John O’Donnell. He will likely need to bring more to the table to take on the capable Galway native, although it must be said that it is extremely hard to look good against fighters like Ivan Godor, who was coming off two wins previously.

Cruiserweight Spiros Demetriou, also seeking a Southern Area belt, promised a knockout before the fight, and that is what he went looking for against Istvan Orsos by throwing haymakers from the first bell. They had begun to take their toll by the fourth, but an over-eager Demetriou was becoming a little frustrated with his opponent’s resilience, and found it difficult to negotiate the Hungarian’s southpaw stance. He persevered however, and another flurry of big shots prompted the referee to stop the bout in the seventh, moving Demetriou to 6-0 and Orsos to 15-37-2.

Tony Milch (12-0) put on a showcase against Ferenc Katona (6-3), using a double jab to good effect and controlling the distance nicely. With only one previous knockout to his name, a wide points victory seemed inevitable until a right hand absolutely starched the Hungarian in the fourth, who had to take a moment on his stall before standing to accept applause from a concerned audience. It had been scheduled for six. After a frantic start, Ricky Coker settled into his four rounder to move to 2-0 with a win over Pole Marcin Cybulski, who was outmanoeuvred from the beginning. There were a couple of upset defeats; Ryan Maycock was stopped by the winless Yailton Neves in the first round of his second pro outing in what should have been a routine victory, while Davis Pagan was halted by Sonny Whiting in his third pro fight. Both had been scheduled for four.