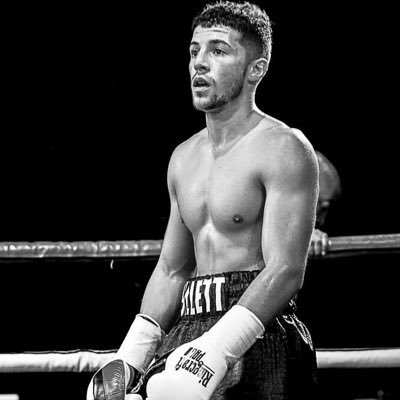 The chunky 19 year-old from Barry Island has already stormed through five battle hardened journeymen – conceding four or more years in each instance – and fully expects to extend that run when he fights for the first time in his native Wales next weekend.

‘My dad Guy runs the Muscle Beach gym on Barry Island and is the strength and conditioning coach to both the Selbys (IBF feather boss Lee and British flyweight king Andrew),’ explains the 5ft 6in three time Welsh junior champion.

‘‘My strength is my strength. From the age of 14, I was following a weights program myself. As a teenager, I was definitely a lot fitter and stronger than the other lads I fought.’

While Sillett’s ox-like strength certainly accords him a leg up, he knows that brawn alone will not suffice for him to succeed in this most diverse of physical disciplines. Last year, after a decorated international amateur career, the Barry bulldozer sought out feted Stockport coach Lee Beard to incorporate the smarts needed to scale the summit.

And the globally regarded tutor is impressed with what he‘s seen.

‘Though Jason likes to come forward, he’s also deceptively quick and elusive. He’s compact defensively and has a stiff jab. He can box front foot and back. He’s developing a really good all round game,’ assesses Beard who earned his spurs working with world champions Ricky Hatton and Argenis Mendis plus Olympic medallist Vijender Singh.

‘He’s just 19 so I want to take my time with him; keep him unbeaten and learning until he’s about 21, 22. After this one, hopefully we can move him up to six, then eight round level where he’ll be far better suited.

‘Style wise, we’re still finding a balance.  He’s stocky and aggressive with a low centre of gravity. He’s already developing his man strength – his Dad is really good at what he does – and lately I can feel more devil when he punches the pads and body bag, particularly with his body punching.’

Sillett’s love of the gloves can be traced back to his primary school years.

He recalls: ‘Growing up I wasn’t really a scrapper but I always enjoyed the physical sports. I played rugby for a bit and done some Thai Boxing before dad first took me to the Barry Eastside boxing gym, aged nine.

‘I enjoyed it straight away, particularly the competition side of it. I had my first bout at 10. Back then, I was a bit of a fat kid but, by 12, I’d lost the weight.

‘After moving to the Splott Adventure club in Cardiff, I had over 50 amateur contests and won well over half. I won a Welsh Junior ABA title, a Welsh Youth title and a Welsh Boys Clubs title plus silver in the British ABAs when I was about 15. I travelled with Welsh squads to Denmark and Azerbaijan.

‘But from the very beginning, all I wanted was to be a professional boxer and I turned over as soon as I was able. I’m a physically strong box-fighter so my style was always going to be best suited to the professional game.’

In October 2015, the Welsh warmonger became Britain’s youngest prizefighter when he penned a deal with Beard and committed to developing his craft in England’s north-west. If he falls short of his ambitions, it’s unlikely to be through lack of dedication.

‘Monday to Thursday, I stay at Lee’s mother-in-law’s and train in Kerry Kayes gym in Denton, Manchester alongside the likes of Vijender Singh, Jimmy Kelly and Adrian Gonzalez. Weekends, I focus on S&C (strength and conditioning) work with my dad back in Barry,’ says quiet man Sillett.

‘I do quite a bit of sparring with Lee’s son Adrian (Gonzalez) and I’ve sparred Terry Flanagan quite a few times. Before that, I did quite a bit with Jack Catterall.

‘Lee’s got me using my skills and my brain a lot more rather than just threshing away. I’m starting to see things quicker. I aspire to be in 12 round fights so I know I need to be clever, break opponents down. I’m happy with the way I’m progressing.’

After a fistful of routine tutorials against grizzled domestic circuit fighters in the north-west, there’s sure to be an extra bounce to strongman Sillett’s stride when he makes an emotional return to the Principality – Cardiff Motorpoint Arena, to be precise – for a scheduled four rounder on Saturday week.

‘This has been a long time coming,’ he says.

‘I usually take a coach load of 50 or so when I fight up north but there’ll be more than double that for this one. Even though I’m the promoter’s boy, I’ve always felt like the away fighter in previous fights.  It’s easily the biggest promotion I’ve been involved with and I know the atmosphere will be amazing.

‘I’m very keen to show the Welsh fans what I can bring to the table; my skills, how I can adapt. Hopefully, it’ll be an entertaining fight so I can increase my popularity, climb the ladder and get my name out there.

‘All I’m focussed on now is to keep winning and keep learning. I’m like a steam train, full speed ahead. I plan to go all the way to the top. Otherwise there’s no point doing it.’