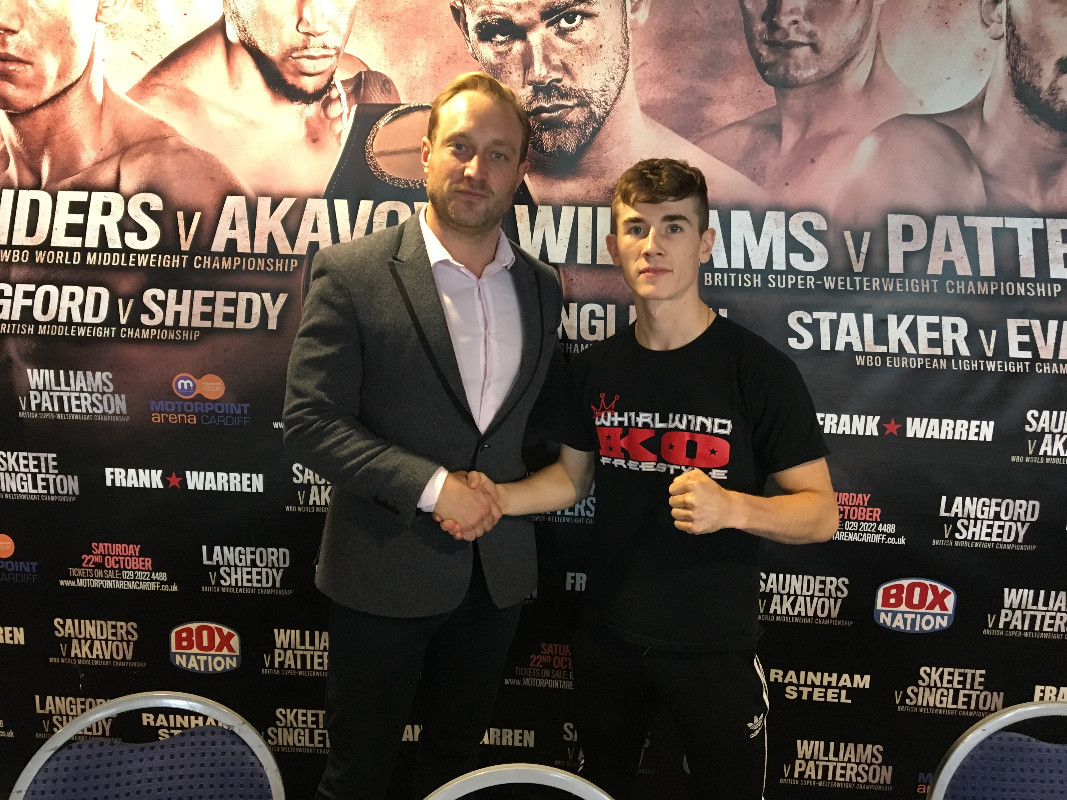 Red-hot Lichfield Flyweight prospect Bradley Foster is delighted to have signed a three-year promotional deal with Frank Warren. The nine-time kickboxing World Champion has raced to 5-0 since switching to professional boxing and is confident he can take his career onto the next level under the guidance of Hall of Famer Warren.

“I started kickboxing when I was nine and achieved everything in the sport by the age of 18 so I decided to move on to boxing after my last World title fight. This is a new challenge for me and I’m determined to be just as successful in boxing.

“Mirroring that success in boxing will be a lot more difficult but I just need to keep on training hard and taking one fight at a time and hopefully I’ll achieve my dream of becoming a World Champion one day.

Despite his phenomenal success in kickboxing, 19 year-old Foster is keen not to rush his progress and is adamant he still has a lot to learn. Litchfield’s Foster believes his fighting style has always been suited to professional boxing.

“At the start you have to get your footwork right but I’ve always loved boxing so the transition has been fairly smooth. People that have seen me in the kickboxing game always told me that I’m more of a boxer! Boxing is a tougher sport and more of a challenge; it brings out the best in me.

“I’ve had a very busy first year. Winning all five of my fights has given me a big confidence boost. I’ve had four four rounders’ and one six rounder and then I’m out again in another six rounder at The Venue in Dudley on December 4th. Being out so regularly in my first year has been really good for my development, I had no amateur fights and I’m learning the game as I go.”

‘The Blade’ is trained by former kickboxing supremos Richard Waller, Simon Akufo and Paul Collins in Birmingham and managed by PJ Rowson. After announcing himself in the paid ranks with a comfortable points win over Josh O’Donnell back in December 2015, Foster has gone on to outpoint Gary Reeve, Jordan Turner, Sergey Tasimov and most recently Anwar Alfadli.

“I’m delighted to be teaming up with top promoter Frank Warren and BoxNation. He’s well known for developing the very best British boxers and I know he can do the same for me. This is a massive stage and an even bigger opportunity for me; I’m looking forward to showcasing what I can do.

“I’m a great all-rounder. You watch all of the best fighters and try to add little bits of their skillset to your game. I’m always looking to entertain but winning has always been the most important thing.”

Richard Waller, Head Trainer of Foster, said: “Bradley is probably one of the most active boxers in the country. If we can match his progress next year, we’ll be aiming for his first title. Everyone is going to see what Bradley is capable of. He’s a come-forward type of fighter with a brilliant defence; he’s very difficult to hit.”