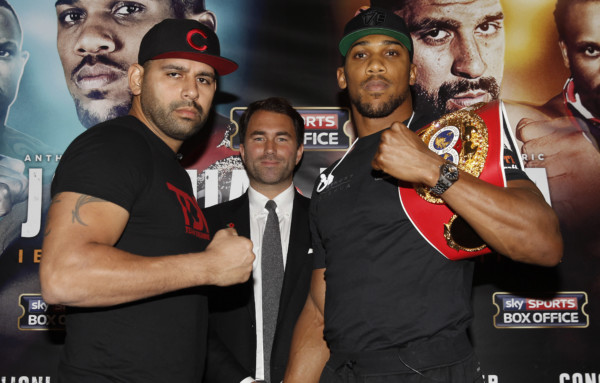 London’s IBF title holder Anthony Joshua MBE (243lbs) fought his third America opponent on the bounce when meeting Eric Molina (255lbs) in Manchester tonight and made it a hat-trick of wins after hammering his man to the canvas in three rounds to set up a money-spinning 2017 showdown with former world Champion Wladimir Klitschko, who took in the fight at ringside.

Joshua (18-0, 18 KOs) beat Charles “I walk this world like a god” Martin in April to win the IBF belt that had been stripped from former incumbent Tyson Fury then etched his first notch on the bedpost by stopping Dominic Breazeale in June.

Molina (25-4 19 early) was knocked out in nine by WBC holder Deontay Wilder in June of last year, landing hard shots on the titlist before going down. however, he lacks the guile, or indeed the barbarity, required to make a mark in this the most stripped down of boxing’s division.

Since winning gold in 2012, Joshua has been in beserker mode, hammering every foe into defeat within the distance. A huge right hand in the third round continued the run, Joshua floored Molina then kept the pressure on to register his second title defence.

Referee Steve Gray called it off at 2:02 of the third to continue Joshua’s rise. “They look for the shots to try to stop you, but I was patient because people are fresh early on. We move on, we get to the drawing board and look to 2017” said Joshua when speaking to Sky Sports.

“It is hard dealing with a negative boxer who isn’t giving you any options. I just had to be patient and create the opportunities. Until you step into the ring you don’t know you’re facing.”

“All the coaches I’m working with are putting in the effort,” he said when asked if the news that Robert McCracken is now officially in his corner has come out.