THE BEAUTY AND THE BEAST OF BRITISH BOXING 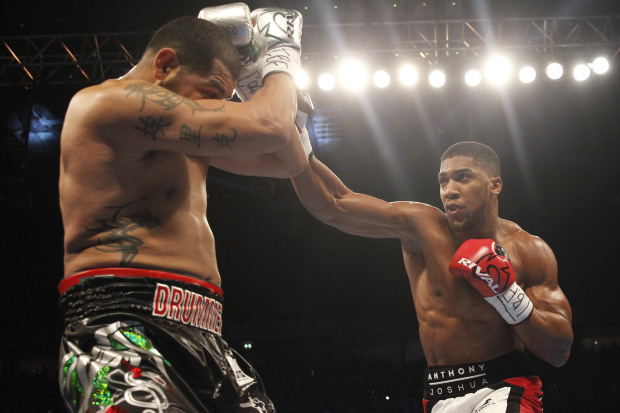 Make no mistake about it, the December 10th Matchroom card in Manchester was an excellent one. Usually with such a lengthy card, there are several mismatches and filler fights in which the result is never really in doubt. And although there were a few mismatches on paper, the fighters that were brought in as opponents did their reputations little harm.

Conor Benn (6-0, 4KOs) opened the live broadcast in spectacular fashion, earning a first round knockout via left hook. Despite lacking the sort of amateur pedigree that translates well to the pro game, Benn has come on leaps and bounds in his short course as a professional fighter. A man not lacking in amateur pedigree is enigmatic Cuban Heavyweight Luis Ortiz (27-0, 23KOs) who continued his impressive winning streak with a seventh round stoppage against the ever resilient Dave Allen (9-2-1, 6KOs). He will feature prominently in the heavyweight division in 2017.

Further down the card, Khalid ‘Kal’ Yafai (21-0, 14KOs) became the first man from Birmingham to win a world title in the last 100 years, shutting out veteran Luis Concepcion (35-5, 24KOs) to win the vacant WBA Super -Flyweight title. With a display that showed maturity and ring craft well beyond his years, Yafai joined the elite of perhaps the most competitive division in boxing, featuring the likes of WBC champion Roman Gonzalez (46-0, 38KOs) and the phenomenal Naoya Inoue (11-0, 9KOs), both of whom feature heavily in most pound for pound lists. Katie Taylor (2-0, 1KO) continued her quest to become a household name as she stepped up in competition and handled business, showcasing hand speed, footwork and accuracy fitting of a fighter heralded as the saviour of women’s boxing.

In recent times, Eddie Hearn has been accused for putting on shows not worthy of being on PPV. This time however, I imagine there will be very few complaints. There were several fight of the year candidates; Hosea Burton (19-1, 9KOs) and Frank ‘The Wise Guy’ Buglioni (22-2, 15KOs) had a battle for the ages. Many that witnessed the bout at ringside described it as the best fight they’d ever seen live. Buglioni managed to secure the British Light Heavyweight title with only a minute remaining in the twelfth round with a spectacular stoppage. Despite the supposed bad blood in the build up, Buglioni shared a photo of the two after the fight as they waited to get their battle wounds stitched, suggesting that any previous animosity had been dispelled.

On the topic of bad blood, in a fight that almost never happened but subsequently became the best British heavyweight clash in over a decade, Dillian Whyte (21-1, 15KOs) and Dereck Chisora (26-7, 18KOs) left it all on the line. Many believed the fight would be competitive as long as Chisora still had something left in the tank. He proved that and then some with what many feel was his best performance in years. At times he frustrated Whyte with head movement, throwing clubbing shots that landed just about anywhere and everywhere. He appeared to rock Whyte on several occasions. It can be suggested however, that Whyte’s tendency to be off balance made it look as though he was in more danger than he was. Although both men appeared to be gassed in the second half of the fight, Whyte had enough left to maintain some snap in his jab and some crispness in his combinations, winning the championship rounds and ultimately the fight. A rematch surely beckons.

At the top of the bill was Anthony Joshua (18-0, 18KOs) making the second defence of his IBF world title against Eric Molina (25-4). Many hoped that Molina would provide a stern test, offering at least some sort of indication as to whether Joshua could stand up to a decent heavyweight puncher. Nevertheless in what seemed like an inevitable outcome, Joshua swiftly dispatched of Molina in the third round. There were better opponents for Joshua sitting in the crowd; Haye, Briggs, Bellew and Fury were all present at some point during the evening. Yet it was Wladimir Klitschko (64-4, 53KOs) who made his presence felt as he was invited into the ring upon the announcement that he will be challenging Joshua for his IBF title in a bout where the WBA belt is also on the line. The two heavyweights were very complimentary and wished each other luck ahead of their April 29th encounter. Yes, it was an excellent card.

I’m a firm believer that the world works in a state of Yin and yang, and thus in spite of all the positives that can be taken from December the 10th, there are also negatives. As is often the case in sports, the losers on Saturday night were disregarded, particularly the ones not many of people had heard of. Despite, the glitz and glamour that appears on the surface level of the sport, boxing at its core is a sport that is synonymous with grit and courage. It attracts those who do not have much else. Away from the cameras of Sky Sports, Boxnation and the like, hours of sacrifice are put in. Boxing is the loneliest of sports, specifically for those who are brought in as opponents for the likes of Conor Benn and other up and coming prospects. These are men who must work regular jobs in conjunction with their fight preparation.

Browse through social media after a big weekend of boxing and you are all too likely to see these professional fighters described as ‘tomato cans’ or as ‘bums’. Most of these insults come from so called fans and pundits who have never even thought about setting foot inside a boxing ring let alone actually laced up a pair of gloves. While we as fans of a sport that is rooted in entertainment may be allowed to critique the athletic performance of these men inside the ring, we should never question their mettle and morality. The recent clash between Vasyl Lomachenko (7-1, 5KOs) and Nicolas Walter (26-1-1, 21KOs) in which Walters quit in the seventh round is a prime example of this. After the fight there was a mass of tweets, posts and articles online calling Walters anything from a quitter to those suggesting he should have his purse retracted. Walters quit the fight because he believed he had no chance of winning. Once a fighter has lost his belief, he has no chance at victory so why continue? Many of us in the boxing community would rather see a fighter go out on their shield than live to fight another day.

Walters is a high level example of the lack of respect that is often present in the boxing community. On Saturday night, Eric Molina was met with an even bigger mass of criticism. And while I do agree that he could have thrown a few more punches, as the saying goes “you don’t play boxing”. Thus ultimately, whatever the outcome of any given fight, those who have the nerve to step inside a boxing ring should be afforded at least a basic level of respect. To some degree, nights like December the 10th would not be possible without them.*