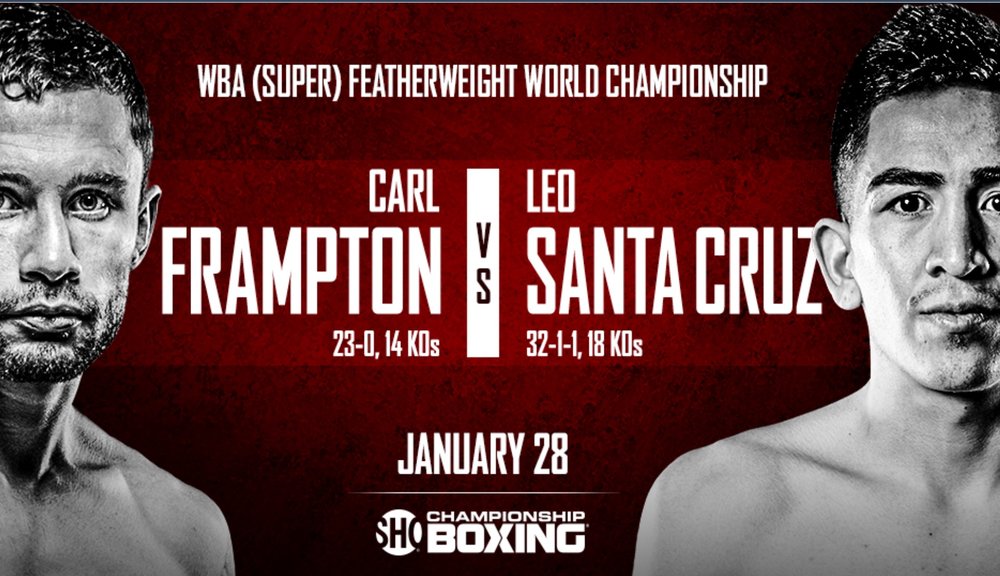 The dedicated Carl Frampton (23-0, 14KOs) fan club are in Las Vegas and the strip is currently a blanket of green as the Belfast champion’s army of supporters get ready to roar their man to victory in his rematch with American based Mexican warrior Leo Santa Cruz (31-1, 18KOs) at the MGM Grand Garden Arena and ‘The jackal’ has promised he will send them home happy.

Over 4,000 fans are said to have made the journey from Ireland and the UK, with many more travelling from other parts of the States to lend their support and witness one of the best pound for pound protagonists currently plying their trade in the fight game. Vegas is expecting scenes in the arena tonight reminiscent of the days when Mancunian Ricky Hatton’s faithful took over Sin City.

After weighing in yesterday at 125lbs, exactly the same as his challenger Cruz, both a pound under the 126lbs limit for this exciting WBA Super featherweight clash between arguably the two best pugilists in the division.

Frampton, 29, received a huge cheer at the weigh-in and took to the microphone to pay his own respects to his thousands of supporters for making the trip across the Atlantic. “I want to thank each and every person who has come out here to support me.” he said.

“I’m really grateful for your support. I’m going to send you all home happy.”

The humble Frampton then paid tribute to his opponent and suggested that their rematch will be every bit as good as their first meeting which was a real thriller in New York last July.

“I was grateful and honoured to share a ring with such a great champion,” added Frampton.

“The fans enjoyed our fight last time and I expect more of the same on Saturday night. It’s going to be an exciting fight.”

Santa Cruz, 28, is recognised also as a leading light in world boxing and genuine pressure fighter who throws an above average amount of punches per round. But Frampton was able to counteract his effective style in the first fight and Cruz recognises only a career best performance this time will allow him to reverse the decision.

“I can use my distance and box if I wanted to,” said Cruz. “But I want to brawl. I’m going to do a little bit of everything. I’m going to be the smarter fighter. I need to really fight the best fight of my career. This is a huge fight and it’s the main event in Las Vegas. This is what I dreamed of.” added the former champ.

But after the first meeting between the pair, Frampton believes he will have the “psychological edge” going into the return and he is probably correct. It could be said that Santa Cruz under estimated just how tough and skilful his conqueror is, he won’t this time.

The first fight was the first time Frampton had fought at featherweight and he believes he is now a better boxer all round in the higher weight class. “Going into this fight, I have the psychological edge,” Frampton said. “This is my second fight at featherweight, so I’m getting more used to the weight. I feel more comfortable overall this time.

“It means absolutely nothing to me that I am fighting him here. I am going to beat him again but this time more convincingly. Taking off four pounds to make super-bantamweight was affecting my performance. I prefer being up here at featherweight. I really feel like a different man.

“I’m more happy with everything and I’m able to put a bit more into the sessions now but I can eat more.” added Frampton.

Frampton v Santa Cruz II is being shown live in the UK on Sky Sports 1, from 1am in the early hours of Sunday, (January 29th)