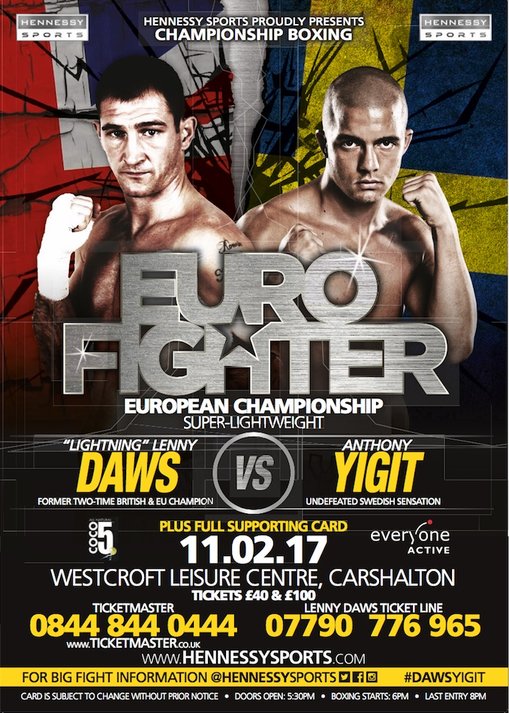 London (25 January 2017) European Super-Lightweight Title challenger Lenny Daws has backed Sutton United to do an FA Cup giant-killing this Sunday when they face Leeds United and has offered his services to the team ahead of the crucial match.

The British fight hero, who hails from nearby Carshalton, faces his own big fight against undefeated Swede Anthony Yigit for the European crown on Saturday 11th February at the Westcroft Leisure Centre, but is throwing full support behind his local team.

Non-league Sutton caused a huge upset when they dumped near neighbours and Premier League hopefuls AFC Wimbledon out of the FA Cup after they were behind and fired back with two late goals to earn a place in the glamorous fourth-round tie.

“Lightning” Lenny is deep in training and sparring with a few weeks’ to go until his showdown against Yigit and said the team are welcome to come to his gym between now and the match.

“Sutton coming from behind against AFC Wimbledon to bin them out of the FA Cup shows that the team have the fighting heart and can rise to the challenge when the chips are down,” Said Daws.

“The team are fighters and just like boxers in a fight, sometimes you’re behind on the scorecards or under fire and you just have to grit your teeth and fire back and get yourself back on top and that’s what these players are like,”

“I’m sure the win against AFC Wimbledon has given the team a tremendous lift and boost in confidence and shown them that they can go on and claim the big scalps in the FA Cup, that’s what the glamour of the tournament is with the underdogs coming through and winning,”

“I like to go into a fight as the underdog because that gives me the fire and hunger to prove everyone wrong and upset the odds and that is what they need to do against Leeds and I believe they will come through the winner again,”

“The manager Paul Doswell and the lads’ are more than welcome to come to my boxing gym with my trainer Ian Burbedge and we’d be delighted to help the team anyway possible with motivational fight talk or boxing training, anything that I can do would be a pleasure to see them win,”

“The one thing I can’t do for them, though, is play on Sunday as I’ve got two left feet when it comes to football, that’s why I’ve always been much better with my hands!”