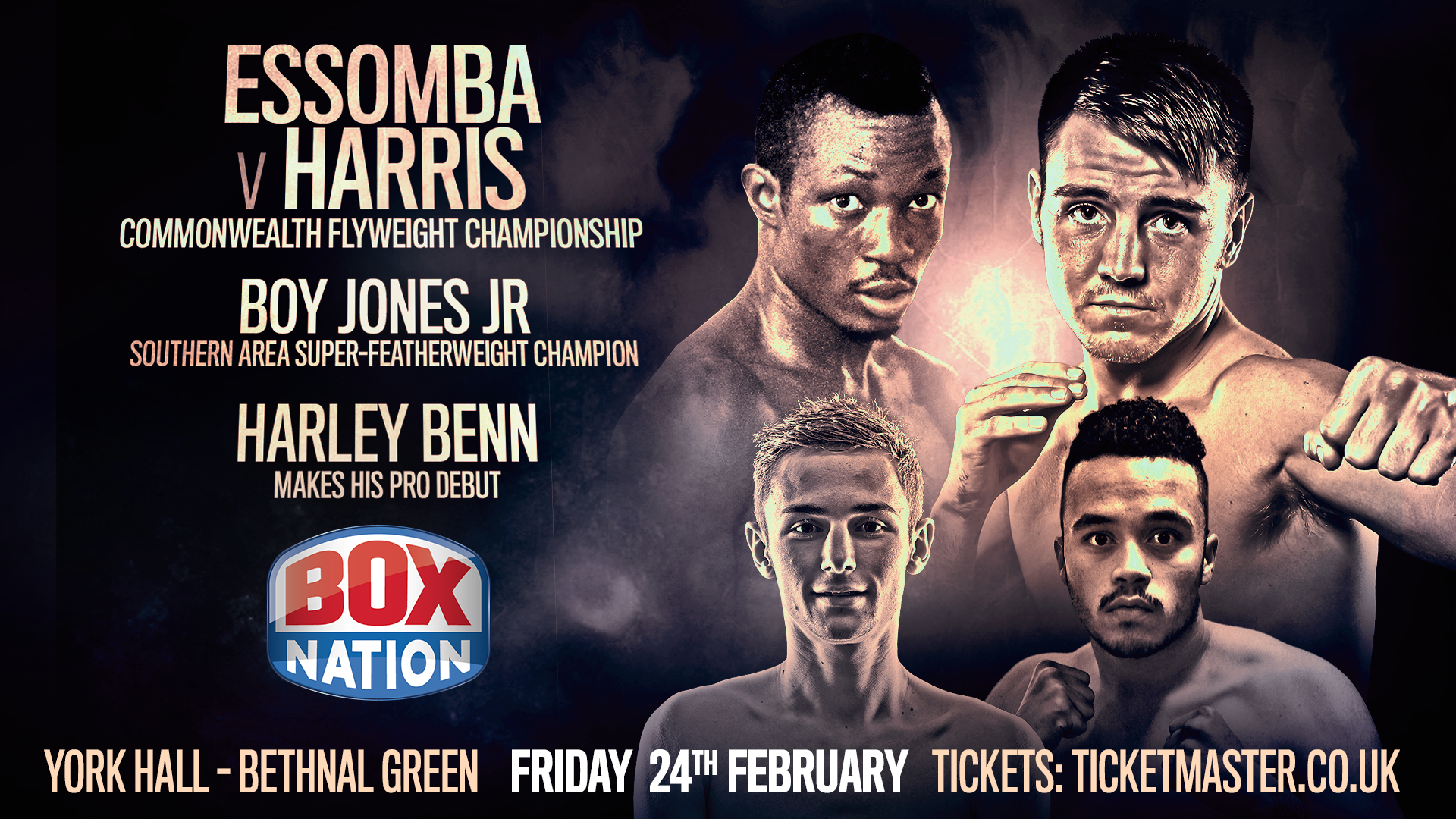 Fast-rising Swansea talent Jay Harris has a chance to bag his first title in just his tenth fight when he challenges Ryhope’s Thomas Essomba for the Commonwealth Flyweight Championship at Bethnal Green’s York Hall on Saturday 24th February, live and exclusive on BoxNation.

Harris, 9-0 6 KO’s, has stormed his way to a domestic title shot after racking up six consecutive knockout wins in impressive fashion. Determined to follow in the footsteps of his father Peter, who owned the Lord Lonsdale Featherweight belt in 1988, Harris is ready to seize his opportunity.

“To be fighting for a title in just my tenth fight is huge for me and I’m determined to become the Commonwealth Champion on February 24th,” said Harris. “I’ve always said to Gary (Lockett) if an opportunity for a title came up at Flyweight I’d go for it, it’s only an extra pound that I’ve got to get off so it doesn’t make any difference to me.

“I’ve seen a few videos of Thomas and he looks strong and tough. He’s the Champion so he must have something about him but that belt is coming back to Swansea with me. Six knockout wins on the bounce gives you a lot of confidence.

“I’ve been catching my opponents with the right shots and they’ve been going over. I’m not going to take this fight lightly as I know he’s going to be dangerous but the plan is to go in there and do what I do best.”

Chief-support on the card sees Chingford’s Boy Jones Jnr make the first defence of his Southern Area Super-Featherweight strap. Baby-faced Boy has an exciting year ahead of him, having already romped to eleven wins at the tender age of 20. The Dom Negus and Lenny Butcher-trained character outpointed Martin Hill last time out in front of a packed-out Brentwood Centre.

New Maldon’s Lerrone Richards, a super-skilled and frighteningly strong southpaw from Alan Smith’s iBox Gym in Bromley, is loving life back under the lights and looking to make up for lost time in 2017. Richard’s fights over six after impressively stopping Gordan Glisic in his big comeback fight last October.

Sikh warrior Sanjeev Singh Sahota aims to make it six wins undefeated when he fights in his first six round Super-Lightweight contest. ‘SSS’ enjoyed a memorable 2016, racing to five wins in his first year as a professional and fighting on the undercard of Indian superstar Vijender Singh’s WBO Inter-Continental showdown out in New Delhi.

Power-punching Sidcup Super-Featherweight D.P. Carr looks to extend his unbeaten record to 7-0 when he fights over six. Known as ‘The Cannon’, Carr is certainly living up to his nickname with four big knockouts to date.

Hugely-popular Chelmsford Super-Middleweight Billy ‘The Bomb’ Long returns to the ring after his devastating first round blitz of Dean Gillen last time out at the Brentwood Centre. South Ockendon Super-Lightweight Charlie Driscoll looks to build on his perfect start to life in the paid ranks when he takes on Cardiff’s Rhys Saunders.

Welling Super-Featherweight Archie Sharp has won all six of his bouts since turning professional in 2015 and is eyeing his first domestic title at the back end of 2017. York Hall has always been happy hunting ground for the ‘Sharpshooter’

Completing a stacked card are debutants Zak Chelli and Naylor Ball. Both recently signed professional terms with Frank Warren and are eager to impress on their debuts at the home of boxing.

Fulham’s Chelli, a double England elite Middleweight Champion, will campaign at Super-Middleweight in the paid ranks and Pinewood’s Ball, a National Youth Champion and British Youth silver medallist, kicks-off his pro career in a four round Heavyweight contest.