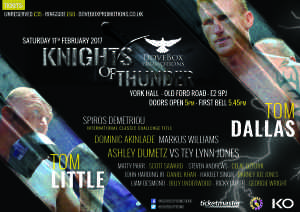 Dove Box Promotions provided a bumper event for the boxing fans of London this weekend, with a huge card taking place on Saturday the 11th February at the famous York Hall in Bethnal Green. Despite a few cancellations thanks to a variety of reasons (weight, injury and “unforeseen circumstances”) the show had much to offer in the way of action, and showcased good variety during an atmospheric and good-humoured evening.

The evening’s headliner played out as I feared it might for Tom Dallas when I previewed the promotion back in January. Dallas’ game plan would have been to avoid a gunfight at all costs, but instead he walked right into one when Tom Little, seeking revenge for a defeat in 2012, tagged him badly halfway through the first round. Sensing blood, Little (who appeared riled up for this contest) steamrolled into the Kent man, who was made to cover up in his corner.

An attempt to fire back left Dallas open, and a hook to the chin sagged him into the ring post, forcing referee to stop the action with around a minute left. Little celebrated madly, while Dallas, dejected, slumped into his stool. He seemed in good spirits, shrugging to the crowd as if to say “I just can’t get a break”, but he will know that when he comes back from this defeat, if at all, it will be from the very beginning. Little, accompanied to the ring by Billy Joe Saunders, moves to 8-4 with renewed confidence after knocking out the only man to have beaten him in the same way.

The fight of the night came thanks to a fun middleweight scrap between Ashley Bailey Dumetz and Tey Lynn Jones. The opening rounds were nip and tuck affairs, with both men taking turns to enjoy good periods of work. The better quality was coming from Jones however, and body shots and effective counterpunching saw him take the first three sessions. Sensing he was behind, Dumetz rallied in the fourth, starting quickly and working hard throughout. The fifth saw Jones match his opponent’s punch rate in a round that saw both men hurt, although Dumetz more noticeably so at the end of some superb action. The sixth and final stanza continued in the same vein, with Jones’ experience enough to see him to a 59-55 points win, a score that matched my own. The pair received a deserved standing ovation after an excellent showing for the pair of them. Tey Lynn Jones moves to 6-0 and could win something meaningful if he continues to deliver performances like this. Ashley Bailey Dumetz moves to 2-2, but will come again after proving he is no pushover.

The night had a surprise in store; Dominic Akinlade, former Southern Area champ and soon-to-be English title challenger come April, was stunned by Josh Sandland, a novice of just one professional fight. Their six rounder wasn’t tidy, but Sandland worked hard to take the lions’ share of their exchanges on the inside. Akinlade threw range-finding jabs and landed a big uppercut in the second, but it was clear he didn’t quite know what to make of his opponent’s rugged tactics. Sandland turned to boxing on the back foot in the fourth, hurting Akinlade in the process who took the opportunity to grab and spoil. This gave the visitor momentum, and he took the last two sessions as Akinlade, tired and bemused, put up little resistance, looking crestfallen at the final bell. A score of 60-54 in Sandland’s favour was too wide for me, but after awarding Akinlade every benefit of the doubt, a 58-56 score to Sandland was as much as I could give him. Akinlade is now 8-1-1, Sandland now 2-0.

Debutant Daniel Khan looks excellent. Matched against the experienced Antonio Jorvatic (10-31) the gulf in class was clear from the outset, with Khan landing flash combos and left hooks to the body. He takes a convincing 40-36 win, and may turn into a decent lightweight if he punches a little harder. Liam Desmond (7-1) was given a stern test by Edgars Sneidze (4-18), who finished the fight the stronger of the two but hadn’t done enough early on, resulting in a win for Desmond with a score of 39-38, with which I agreed. Debutant Billy Underwood also didn’t have things his own way in beating Marcin Cybulski (8-15-2) over four. After starting reasonably, he had nothing left in the tank by the last round, and was shipping real punishment by the final bell. A 39-37 win will have served as a gut check, but one that can be put down to inexperience.

Georgie Wright (4-1) had no such issues against Anto Nakic (2-8) whom he defeated 40-36. Wright was superior in all departments, showing a good boxing brain and slick movement, but was kept honest by Nakic, who made him work for his victory. Another debutant, Scott Saward, showed composure and confidence in beating Dmitrij Kalinovskij (10-28-2) over four. Once he had settled into the match, a ramrod jab and big overhand right did most of his work, which was consistent and effective. The MMA-fighter-turned-boxer will be disappointed with a score of 39-37, as he won every round on my card by some margin. Matty Parr (1-1-2) was hoping to get back to winning ways against winless Jacob Lucas (0-5-2) but had to settle for another 38-38 draw instead. Small for a light heavyweight, he didn’t make his mark on the fight until the third round, forcing Lucas to turn things messy. I had him up by a point, but there won’t be many complaints in a match difficult to score.

The evening’s opener Steven Andrews made his debut against tough customer Richard Harrison (1-12) who made things hard for the Erith man. Andrews started well, choosing his shots nicely and working the body. He lost confidence when they had little effect on Harrison, who walked him down undeterred in the second half. Andrews took the contest with a generous 40-36 points win; I felt 39-37 was probably fairer. The frantic Ricky Coker (3-0) is eager to get his first knockout, and he nearly did so against Deividas Sajauka (6-29) in the evening’s closing fight. He was on the front foot throughout and was never in any trouble, taking the match 40-36 to the backing of vociferous support, although it was difficult to tell whether the persistent drumming was a motivation or a distraction.

Dove Box Promotions provided huge value for money with this weekend’s instalment, and events like this will ensure their next show is equally well attended and well received.