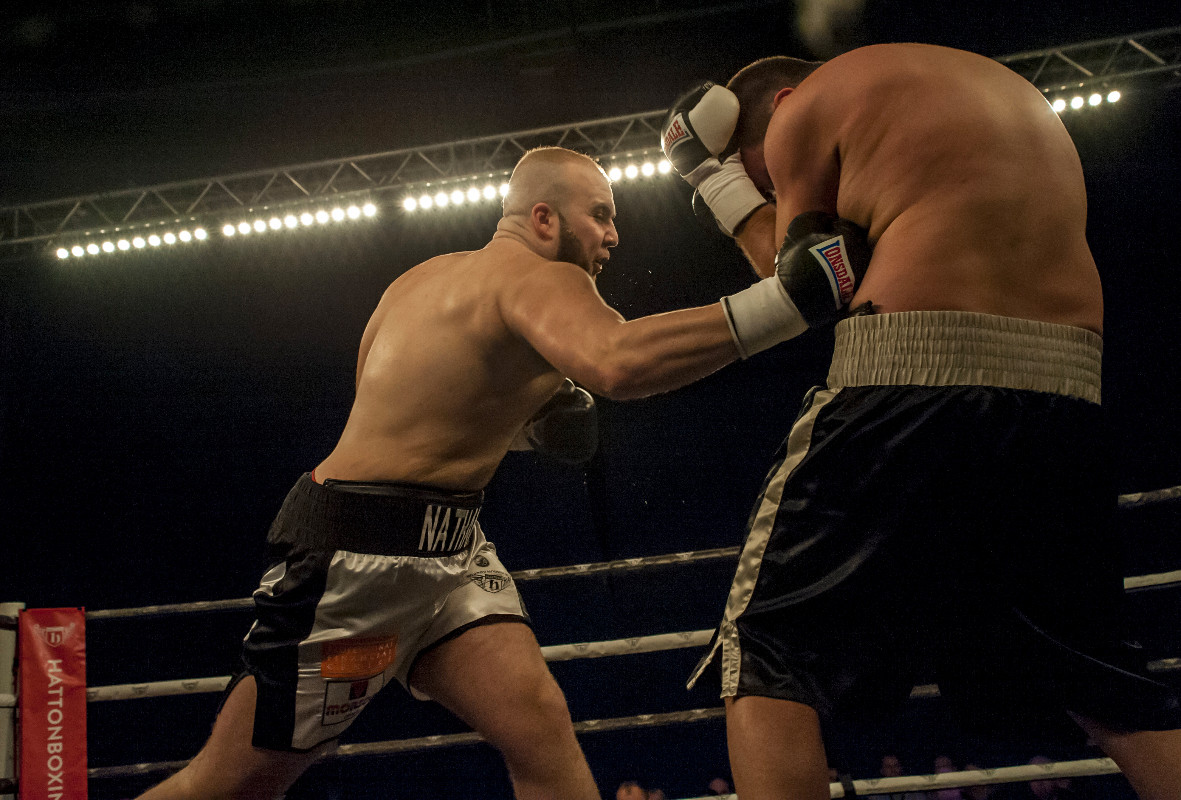 HEAVYWEIGHT sensation Nathan Gorman made short work of Gogita Gorgiladze in Stoke on Saturday night, blasting the Georgian out in just 109 seconds.

Gorman, who is trained by four-time world champion Ricky Hatton, doubled his jab to good effect and exhibited his superior speed before connecting with damaging shots to the body.

And it was one of those blasts to the torso that finished things.

The yelp Gorgiladze let out as the blow connected seemed to reverberate around the venue before he collapsed to the canvas.

Bravely, he managed to clamber back up while referee Kevin Parker’s count was at “nine”, but the grimace on his face and the fact that he was holding his ribs convinced the adjudicator to waive things off.

“The body shots are something I’d been working on in the gym with Ricky and they came off perfectly,” Gorman, now 8-0 (7 KOs), said.

“As soon as the shot landed I knew it was over. It sunk right into his ribs and I wouldn’t be surprised if I cracked them. He was finished after that.

“I landed a few of them before that to the right side and then I tried with the left and found the perfect target.”

Ricky Hatton was famous for his own attacks downstairs during his career and it seems the apple does not fall far from the tree with Gorman.

Hatton said: “I like to think I landed my fair share of great body shots when I fought, but the one that Nathan put this guy away with was a real sickener.

“If you watched it back it’d probably make you wince because it connected with a real thud and you could hear the wind go out of the guy.

“It’s another great display from Nathan. He’s really coming on and I’m very proud of him. I believe he’s a special talent and people are starting to see that now.”

The victory and the success of last night’s Hatton Boxing event will surely add to Gorman’s already sizable fan base.

Fans stayed in their seats and cheered on the boxers throughout the evening, creating an unforgettable atmosphere, and that raucous support can only grow and grow as Gorman and his stablemates progress in their careers.

On the undercard, Gorman’s stablemate Reuben Arrowsmith missed out on the opportunity to win his first professional title as his British Classic Challenge belt clash with Ryan Toms was scored a controversial 77-77 draw by referee Shaun Messer.

Arrowsmith appeared to control the opening half of the contest despite suffering a rib injury in the second round. However, Toms battled back into things after round five, while Arrowsmith suffered a point deduction for holding in the sixth.

Wednesbury’s Sam “Taffy” Evans had an earlier evening, dropping Sylwester Walczak twice in the opener before the Pole’s corner pulled him out between rounds.

Jake Haigh extended his unbeaten record to 3-0 (2 KOs) by halting Bryn Wain at 2.12 of the third round. Haigh, another prospect from the Hatton stable in Hyde, mixed his punches up well before targeting the body. Wain winced several times before the referee decided to save him from further punishment.