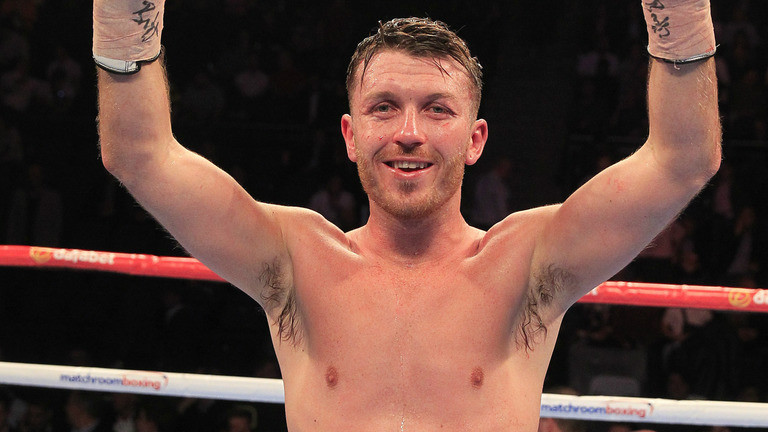 Scotty Cardle can win the Lord Lonsdale belt outright when he defends his British Lightweight title against English champion Robbie Barrett at the SSE Hydro in Glasgow on April 15, live on Sky Sports.

Cardle puts the coveted strap on the line for the fourth time in Scotland, but with a draw in his second defence and rematch against Sean ‘Masher’ Dodd last April, the unbeaten 27 year old needs to see off Barrett to claim the crown for keeps after stoppage wins over Dodd in November 2015 and Kevin Hooper in Glasgow in October.

Barrett is full of confidence going into the bout having landed the English strap on enemy territory in Birmingham against Marcus Ffrench in October and then defeated Hooper in his first defence in March.

Cardle put mandatory challenger Hooper away in style inside six rounds with a clinical display of his own, and the Lytham St Annes man wants another stand-out performance to seal the belt and move on to target European honours.

“I’m over the moon to be getting the chance to win the belt outright,” said Cardle. “I’ve defended it many times now but with the draw I need one more to get my hands on it – and that’s always been the aim, it’s something special and what I’ve always dreamed of.

“The last time I boxed in Glasgow I thought that was the one for me to win it outright, but it’s no stress to fight for it again as I’m proud to be British champion and I love defending it, and to do it in Glasgow is special for me and my family.

“I’d sparred a few times with Kevin but that’s all I had to go on to prepare for the fight, and he got the better of me in those spars to be honest so I was a bit nervous. I knew I had to be at my best and luckily enough I was, I felt great and I’m hoping to produce the same clinical performance as that.

“I haven’t seen much of Robbie, but Kevin has told me a bit about him and I leave that to Joe to study. He’s a southpaw and a good boxer coming off two strong wins, so we’ll look back to my performances against Southpaws like Maxi Hughes and Craig Evans and make sure I’m on that kind of form.

“I don’t want to stand still, there’s a place on my mantelpiece for the Lonsdale belt and once I’ve got that for keeps I want to move on through the stages. The Lightweight scene in Britain is a World scene anyway; Terry Flanagan is a World champion and Luke Campbell is at World level, so if I do fight those guys I am moving forward.

“I really want the European title next, I’d love to fight Edis Tatli and I’d be more than happy to go to Finland to take it from him – I’ve boxed all over the world as an amateur so that wouldn’t faze me in the slightest.”

Cardle’s clash with Barrett is part of a huge night of action in Glasgow as WBA World Super-Lightweight champion Ricky Burns looks to unify against IBF king Julius Indongo.