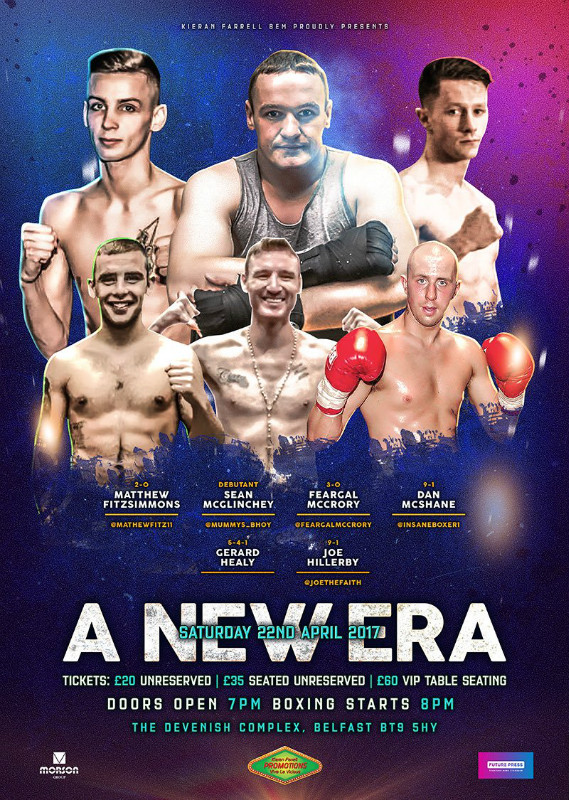 Farrell Promotions Presents A New Era Kieran Farrell brings his successful fight night formula to The Devenish Complex, Belfast on 22nd April, once again charging the low price of £20.00 for unreserved tickets and stacking the card with quality bouts that will bring a mixture of thrills, knockouts, upsets and an atmosphere that just can’t be beat.

When asked about the tough tests ahead, Farrell and his boxers are in full agreement that just like in his own career, the fighters must test themselves in every fight and be in top form to overcome an obstacle in the form of an opponent that is there to win, not to make up the numbers.

Headling the night is Feargal Mcrory taking on Jay Carney for the International title, a bout could go either way as both men are going into this absolutely full of confidence and getting ready to show their skills before the packed house.

Chief Support is debutant Sean Mcglinchy who took bronze as an amateur at the Commonwealth games, looking extremely sharp in the gym this is the first step on what could be a very big career.

Filling out the rest of the undercard will be Sean Magee, Gerald Healy, Joe Hillerby, Dan Mcshane and Matthew ‘Fitzy’ Fitzsimmons, either one capable of entertaining the crowd on their own, showing that once again the young king of promoting is putting on a cracking show.