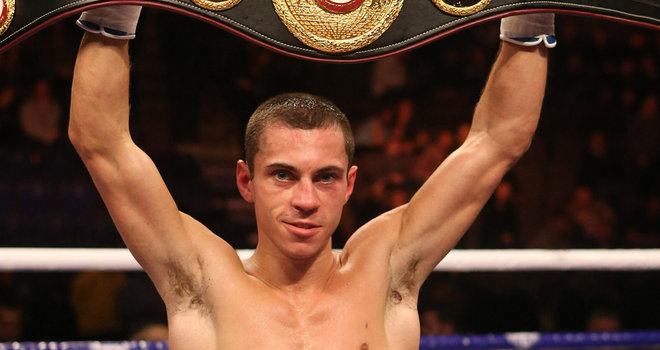 Quigg boxes at Featherweight for the second time having landed the WBA International title in his first fight at his new weight in December in Manchester with a ninth round stoppage.

Wembley Stadium represents another first for Quigg as he has future hall of fame trainer Freddie Roach in his corner for the first time as he takes on Simion.

The Romanian has just the one blemish on the record from his last trip to the UK, where he severely tested Lee Selby over 12 rounds in Hull in 2013, and the 35 year old is ranked number five in the IBF having picked up and defended the International title last year.

Former WBA Super-Bantamweight king Quigg is gunning for a shot at becoming a two-weight World champion, and he believes that a big win in his first ever stadium fight will put him at the front of the queue.

“This is a fight I’m really looking forward to,” said Quigg. “It’s my first fight working with Freddie and training team and it’s a fight that will catapult me right in the mix for a World title fight.

“Simion is an experienced, skilful and strong fighter and his only blemish on his record is against the current IBF champion Lee Selby, who he pushed all the way. I’m expecting and preparing for a very tough fight but one I’m very confident in and expect to put in the best performance of my career and put myself in line for shot at one of the champions.

“Training camp couldn’t be going any better. The switch out to L.A has been a breath of fresh air. The change of environment working with Freddie and the quality of sparring has really freshened things up and I’m excited to show the improvements made on such a massive platform at Wembley Stadium.”

Quigg’s desire to box for world honours at 126lbs could be boosted ahead of the fight as his promoter Eddie Hearn is looking to get the bout official eliminator status.

“This is a great fight for Scott and the last hurdle before he hunts his second World title,” said Hearn. “Simion gave Selby a great fight on our Hull show a few years back and is an all action fighter that will bring the heat on April 29.

“Because of both fighters’ rankings, we are looking to apply to the WBA or the IBF to make this fight an official eliminator for the World title and if victorious I expect Scott’s next fight to be for a Featherweight World crown.”

Quigg’s clash with Simion is the first undercard fight confirmed for the sold-out blockbuster battle between IBF king Joshua and former lineal World ruler Klitschko, with the WBA and IBO straps also up for grabs.