Memories from the King’s Hall 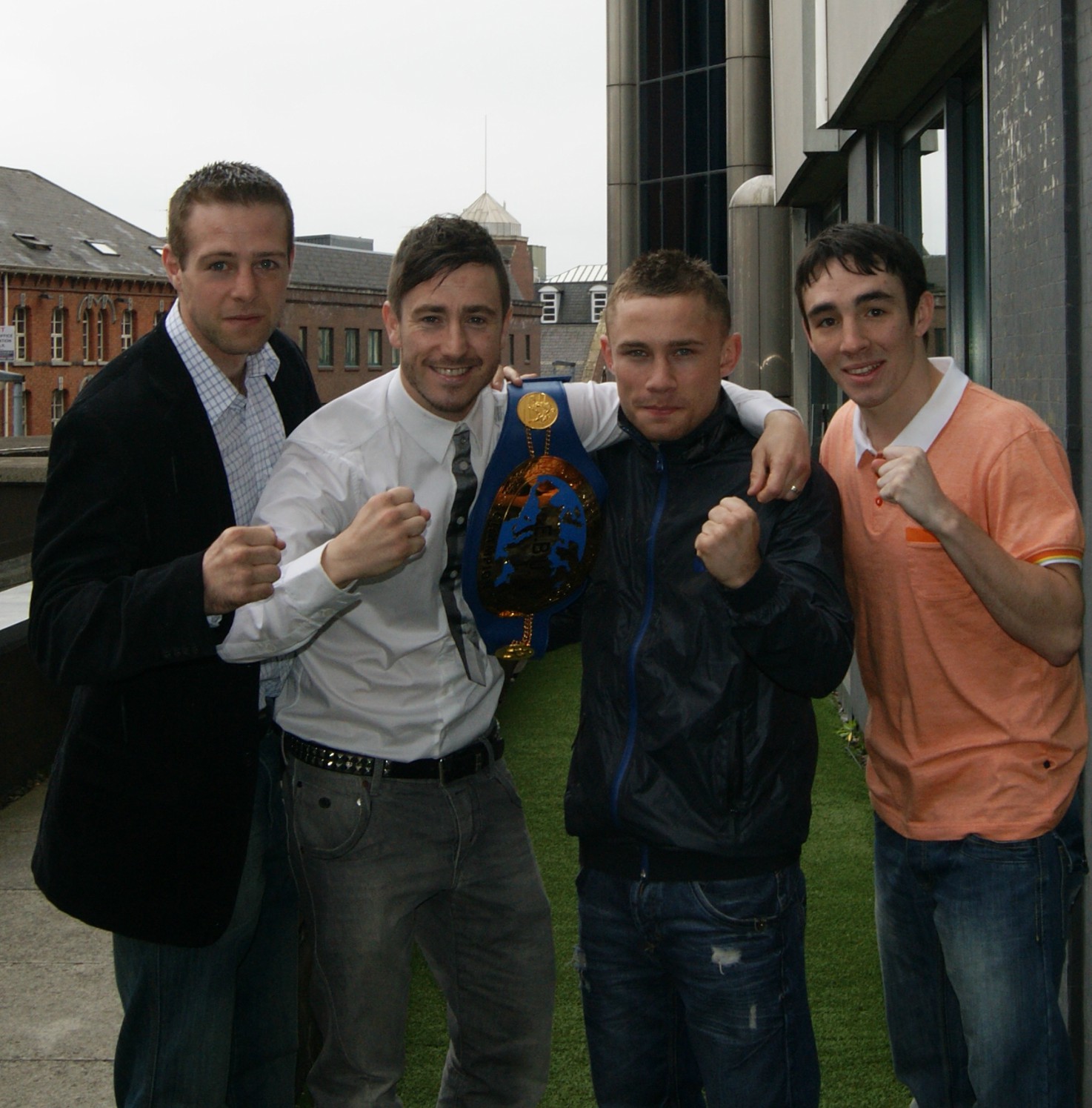 Just before Christmas I found an old SD card containing dozens of boxing snaps I’d long since forgotten about. They included this little beauty (above) of Stephen Haughian, Paul McCloskey, Carl Frampton and Jamie Conlan. Hardly a dog-eared, sepia-tinted collector’s item but a nice snapshot from yesteryear nonetheless, so I put it up on Twitter, much to the amusement of the Irish boxing fraternity.

Back in May 2010, when the photo was taken, the grinning faces were young, vibrant and full of hope. The careers of each men have taken varying twists and turns in the six years since – as is to be expected in this volatile and unpredictable sport.

The photo shoot, on an outside balcony of Belfast’s Europa Hotel, was arranged by show promoter Brian Peters who had spent the preceding years reinvigorating the domestic boxing scene across the Irish border. The well-connected Meath businessman pulled in the power of Sky Sports and Barry Hearn’s Matchroom for this one.

Dungiven’s Paul McCloskey was rightfully the King’s Hall headline attraction on June 11 in a defence of his European light-welterweight title against rough-and-tumble Italian Giuseppe Lauri. Paul had previously swept up at British title level before dismantling Spain’s Daniel Rasilla for the Euro crown in Magherafelt (the same night in fact as Martin Rogan and Sam Sexton clashed for their first fight in the Odyssey Arena). A slick, talented southpaw who could befuddle and outbox men of a fine pedigree, McCloskey made heavy weather of his ten rounds with Lauri before uncorking a lovely right hook to send the Italian’s corner into uproar over the nature of the finish.

McCloskey went on to slip in a routine Euro defence against Scotland’s Barry Morrison before landing a surprise big opportunity against Amir Khan in Manchester, April 2011. Standing off and waiting too long for the openings, McCloskey failed to do himself justice before a fairly innocuous cut opened up and the bout was terminated. Promoter Eddie Hearn, however, took an interest and snapped up the Derryman, vocally campaigning for a Khan rematch by tempting across the only man at that time to have defeated Amir – Colombia’s Breidis Prescott. ‘Dudey’ pushed his body to physical limits; pouring his heart and soul into the bout, battling back from a knockdown and badly broken nose to prevail on points. Paul could barely stand at the final bell and required then-trainer John Breen to hold him up when the contest ended.

I always viewed this as McCloskey’s world title fight without a world title being on the line. He gave absolutely everything, with scant reward. In early 2012 he faced former title holder, and now very much a road warrior, DeMarcus Corley, headlining an all-Irish Prizefighter in his first return to the King’s Hall since the Lauri win.

Paul was well in the fight before a snappy combination from Corley placed him on jelly legs and subsequently invited referee Ian-John Lewis to step in. McCloskey’s world title dream was effectively over and, despite a lopsided points win over Manuel Perez, it was apparent that the fire no longer burned for the pro game. Losing to Dave Ryan, a fighter McCloskey would’ve boxed rings around at his peak, signalled the end of a highly-respectable career.

Chief support on June 11 saw Lurgan man Stephen Haughian clash with Scottish southpaw Kevin McIntyre. The vacant Celtic welterweight title was on the line and the contest doubled as a British title eliminator. Confused and befuddled by the southpaw moves of the Paisley man, Stephen conceded a unanimous points defeat.

Haughian went on to win six rounders against Delroy Mitchell and Dave Ryan on the undercards of Carl Frampton’s two separate Ulster Hall headliners. A contentious points loss to John O’Donnell in December 2012 signalled the end of his career.

Meanwhile, this summer date proved to be a Belfast breakout for Tigers Bay man Carl Frampton. Wowing the local crowd with a dazzling display of movement and precise punch picking, Carl had too much for tough circuit traveller Ian Bailey who at least took his lumps for the duration of their six-round affair. Referee Howard Foster even gave the Slough man a shared round along the way. Backstage, after the fight, a cluster of curious journalists huddled around keenly to record the thoughts of Frampton and manager Barry McGuigan. ‘The Jackal’ cruised to 6-0 and has been on an upward trajectory ever since.

Finally, making up the photographic quartet was super-flyweight Jamie Conlan.

Still on the agenda at the time was a possible fight between Jamie and Belfast rival Luke Wilton. “He doesn’t want the fight,” barked Jamie’s coach at the time John Breen, a no-nonsense veteran from the heart of the city. Indeed, Luke’s father Alan confirmed that his son was pursuing a different path and Wilton
went on to last the 12-round distance with Kevin Satchell for the British title in 2013.

Conlan, meanwhile, entered the King’s Hall for his third paid contest and was still very much at the early stages of his career when low-level opposition was being scraped together. After comfortably dispatching a Bulgarian in Dublin one fight previous, Conlan was served up omnipresent journeyman Delroy Spencer who predictably lasted the distance without offering any substantial threat.

Conlan’s career has twisted and turned since then but he remains unbeaten and has now found a home with the MGM Marbella outfit (recently rebranded as MTK Global) and has become a headline attraction in Belfast. Now an all-action warrior who excites fans with every appearance, Jamie was then a fresh-faced punch picker learning his trade on the undercards of any big show that came to town.

The famous old King’s Hall is no longer used for boxing so these were good times indeed.