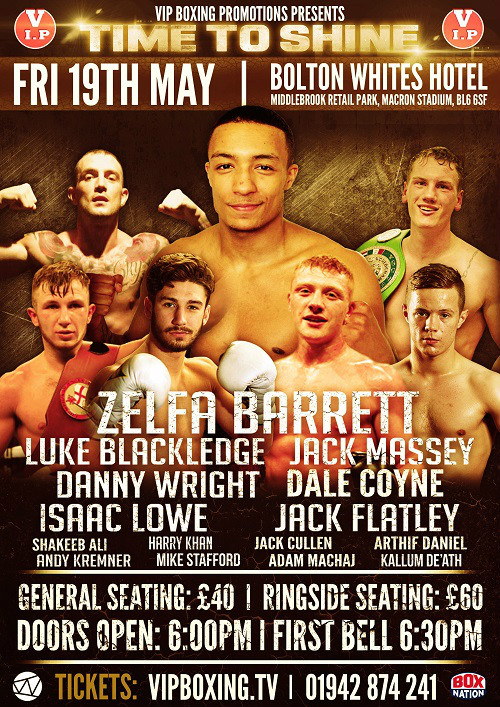 The ‘Time to Shine’ bill is headlined by one of British boxing’s rising super-featherweight stars, Zelfa Barrett; as well as an array of exciting up-and-comers including Dale Coyne, Jack Flatley, Danny Wright, and Haroon Khan.  Also appearing will be Luke Blackledge, who returns to the ring after his British super-middleweight title defeat to Callum Smith in December.

‘Black Flash’ Zelfa, nephew of former British and European light-welterweight champion Pat Barrett, has been pencilled in by many industry insiders as a future world champion.  The unbeaten Manchester puncher, who has knocked out 10 of his 16 opponents, will face highly-experienced southpaw Eusebio Osejo, 28-20-3, in preparation for an upcoming British title eliminator against Ronnie Clark.

“I’m delighted to be working with BoxNation on this card, and it’s great they will have their cameras at the show to showcase lots of young, British boxing talent,” said Wood.  “I’ve promoted and managed plenty of champions over the years, and I’m convinced that a number of the lads appearing on this show will be involved in future title fights.

“Zelfa looks very special and if he keeps developing the way he has been then he will undoubtedly be a future star.  He could even go one better than his uncle who fought, but lost, in a world title fight. His opponent, Osejo, is an extremely experienced South American who is very durable and should provide a tough outing ahead of Zelfa’s future eliminator against Clark.

“As well as Zelfa, BoxNation viewers should keep an eye out for unbeaten trio Dale Coyne, Jack Flatley and Danny Wright.  All three have looked exciting so far in their careers, and I think they will all, at the very least, be future British title challengers.  I’m also pleased to have Luke Blackledge returning to the ring after his heavy knockout loss to Callum Smith.  Luke has learnt from that experience and I’m convinced he will have a Lonsdale Belt in his collection at some point soon.

“We also have a couple of heavyweight bouts on the card which will be great entertainment for the crowd, and viewers.  I’m looking forward to watching Russian Alexander Ustinov.  This will be his first fight since December 2015, and fans might remember he was lined up as an opponent for Tyson Fury a while ago.  He’s only lost once in 34 fights, to Kubrat Pulev, and has a win over former world champion David Tua, so he could well be in the world title picture after a couple more wins.  It will also be interesting to see how our own heavyweight Adam Machaj performs against Tom Dallas.  This is a decent test for Adam against a fighter who was once touted as a potential British champion.”

VIP Promotions presents an evening of boxing at The Premier Suite, Bolton Whites Hotel (BL6 6SF) on Friday May 19.

Tickets priced at £40 (general) and £60 (ringside) are available from vipboxing.tv, all boxers, and on the door on the evening.