Mayweather-McGregor: I don’t buy it and nor should you 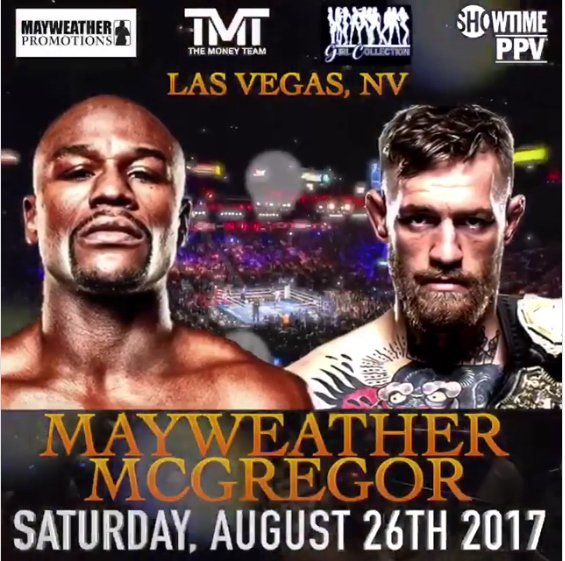 We’ve all felt the tremors. Like Mount Etna they’ve been rumbling on and on beneath our feet for longer than any of us care to remember. Even so, most of us were hoping that the idea would be be buried away in the same manner that my cat disposes of what comes out of the wrong end in our back garden.

But on the other hand, some might say, who can blame them? If I was in their boots would I really turn my nose up at $70 million for what will probably be a few months of having my picture taken followed by a couple of minutes of giving and receiving in the much beleaguered square circle? Well yes I would turn it up actually. And then I’d turn it down. Because it’s all relative isn’t it?

It’s relative because for Messrs Mayweather and McGregor $70 million constitutes for them what for us might be a good afternoon at the bookies. Let’s be honest: neither of these people are REALLY going to suffer from the lack of $70 million in their bank accounts. They’ll still be driving nice cars, still have the pick of any women they might take a fancy to, their snot would still be the same colour and they’d still be able to afford a few coins for the gas meter.

The same, however, cannot be said of boxing. Sadly, boxing needs a farce such as this like it needs a hole in heart. Boxing, as we are all aware, is perfectly capable of dragging itself into the gutter without any help from external sources. Because even though this Barnum and Bailey sideshow will inevitably be seen by the masses as a legitimate boxing confrontation it is, of course, no such thing.

Even the most apathetic of boxing or UFC fan will be aware that this ‘fight’ is destined to be about as competitive as the All Blacks vs the Warmington-on-Sea Octogenarian Flower Arranging Society. In the forty-year-old Mayweather we have the remnants of the greatest defensive boxer of his generation. In McGregor we have somebody who has never laced them up in a professional boxing ring; a novice who in reality would struggle to exceed journeyman status in this country, let alone compete on the world stage with an elite opponent.

You’re probably picking up on the idea that I’m not a supporter of this ‘Farce Of The Century’. And nor should you be. For this reason this crotchety old git is planning to turn the TV over every time I see an ad for this travesty. And I certainly will not pay £20 or whatever it is they plan to rob us of, to support such a circus. Even though I’m a reluctant boxing fan I’m not going to sit on my hands while fat cats cut pieces off the sport and smother them in gravy. And nor should you.

Notwithstanding this I remain a great admirer of Floyd Mayweather; his achievements surely make him one of the greatest boxers in history. I simply refuse, however, to watch him put on a clown’s nose and sit on whoopee cushions for the King’s Shilling. In no way will doing so improve on an already flawless record.

I’m also a fan of Ewan McGregor. I’ve followed his career from his early days in a supporting role in Dennis Potter’s ‘Lipstick On My Collar’, to the brilliant ‘Trainspotting’ and the not quite so brilliant ‘TS2’. And despite those dodgy Star Wars appearances, he’s a fine actor. One of the best of his generation, in fact. Pulling on a pair of boxing gloves and getting punched in the face by an ex-world boxing champion will in no way enhance his acting credentials.

So I’m not buying this one. I’m keeping my cash and getting myself a big juicy kebab and a couple of cans and turning on Netflix. And so should you.

Visit http://ianprobert.com/ for details of Dangerous, Ian’s latest boxing book. you can also access his work on fiction, including his critically acclaimed book Johnny Nothing, by going to his Amazon page via this link.