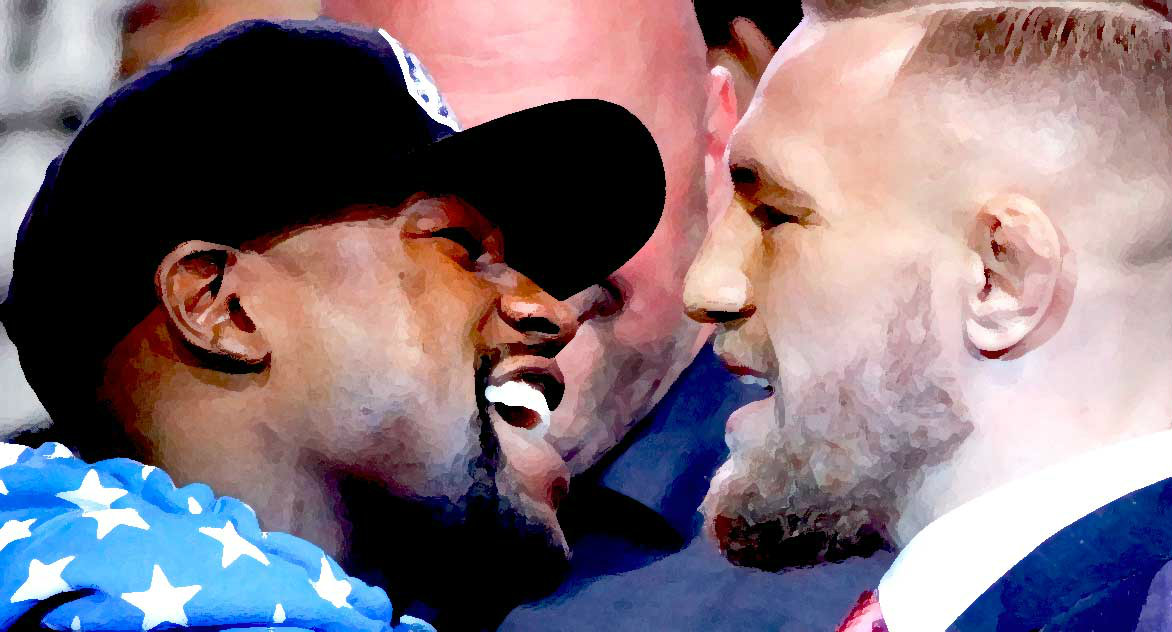 It’s 1982 and Rocky Balboa is about to climb into the ring to face Thunderlips. Despite this event being recognised as a charity match-up in the 3rd of the Rocky series, fans and critics alike agreed this was a little farfetched. Fast forward 35 years and the undefeated pound for pound King and greatest defensive boxer of all time, Floyd Mayweather, faces debutant and mixed martial arts champion, Conor McGregor, in the sport’s biggest ever ‘money’ event.

The fight has been sanctioned by the relevant boxing boards and will be contested at Light-Middleweight, or Super-Welterweight as the Americans insist on referring to it.

This is relevant because Floyd has been campaigning at the sanctioned weight for some time and hasn’t needed to rely on a big build-up of muscle in a short period of time to get him there. Most boxers tend to move up the weight classes as they progress through their career, naturally growing into the weight and remaining competitive. If you want an example of how pilling on muscle in a short period of time hinders your performance just look at undercard fighter Nathan Cleverly. Having lost to Sergey Kovalev in a world title defence of his Light-Heavyweight belt he moved up to Cruiserweight, a jump of 25 lb, over 2 stones. After a couple of warm up wins he fought Tony Bellew, who was more of a naturally bigger man, in a re-match of their 2011 bout and essentially gassed out struggling to fight the full 12 rounds with the extra muscle he was carrying on his shoulders. Looking at the shape of McGregor, I can see him suffering the same challenges, add to that he’s fighting one of, if not the greatest ever, 12 round point scoring boxer, I don’t see how McGregor will be able to compete past 5 rounds. That said, a jump of 9 lb is not the same as a jump of 25 lb, but…. Nathan Cleverly is 6ft 1” and Conor McGregor is 5ft 9”. I assume he’s hasn’t gotten any taller since his last fight and therefore that’s a lot of extra muscle to carry on a fairly small frame.

Over the years Floyd Mayweather has had the advantage of dictating who his opponents are and at what weight they should fight. For example, Hatton at Light-Welterweight would have been a different fighter, Marcos Maidana, despite performing well in the first bout, shouldn’t really have been on Mayweather’s radar (Khan was the name put to Mayweather but he declined) and Manny Pacquiao, this fight was 7 years after it should of happened. This is, of course, clutching at straws, some of the names on Floyd’s resume speak for themselves. However, some of the names really don’t. I’m looking into the last 10 years, but the following really lucked out when Floyd decided he needed a new car: Victor Ortiz, Robert Guerrero, Marcos Maidana (twice) and Andre Berto. And of course, we can now add Conor McGregor to this list. He’s about to become one of the richest men in sport having never had a competitive boxing match. Some of the comparisons seen over the past few months are ridiculous, however some are fit for purpose. Some examples would be: Rugby League World Champions, Australia, rolling up and beating the All Blacks at Rugby Union. World Rally Driving Champion, Sébastien Ogier, winning the Formula One Championship or Usain Bolt winning the 10,000 metres. They are two different sports and, in the same way, Floyd couldn’t walk into MMA and become champion, Conor cannot beat the best at Queensberry rules.

‘He has a puncher’s chance’. This is the overused phrase slung at an extreme underdog fighting a superior boxer. It essentially means, if he’s lucky enough to land a big shot, he might be able to knock him out. Well….. Considering the analysis’s have to refer to Mayweather’s fight with Shane Mosley in 2010 to find anyone laying a power shot on him. It think it’s safe to assume that, considering Cotto, Alvares and Pacquiao were unable to connect cleanly, McGregor will also struggle to land anything of note. He will, in my opinion, be very keen to land a big shot early on which will only increase his chances of gassing out mid-fight. Similar to a home fighter in Germany, the crowd will cheer every punch he throws regardless of it connecting or not. Then when / if the decision comes from the MC after 12 rounds, much like the Pac Man fight, the crowd will not be able to believe their favourite lost.

In a nutshell, Mayweather, doesn’t get hit and he’s the best pound for pound boxer in recent times. Therefore what is it people have seen that makes them think Conor McGregor can beat Floyd Mayweather? What is it they’ve seen that hasn’t been seen by the 24 World Champions already beaten by Mayweather? That’s 24 World Champions including Gatti, Judah, De La Hoya, Hatton, Marquez, Mosely, Cotto, Alvarez and Pacquiao. All current, or future hall of famers, that were unable to unlock Floyd’s defence. What is different about McGregor? Is it purely down to his big following from his exploits in MMA? Is it due to being the golden egg in Dana White’s MMA world? The real answer to these questions is no one knows, literally, no one knows about his boxing ability. Even the leaked video of him sparring Paulie Malignaggi had been edited to within an inch of its life leaving more questions than answers. And, if you’re claiming an unfit, retired boxer like Malignaggi, who recently lost to Sam Eggington, is a suitable sparring partner for a fight against Floyd Mayweather, you’re little more than clueless. At his very best, Pauli was a skilful fighter, but extremely easy to hit for top opponents and with such power he’d struggle to knock out a hamster.

I mean if Conor could box, he would box. Surely?  Why isn’t Conor McGregor already a boxing champion. No one who says they’re about to dominate the boxing world would’ve chose MMA. Watching his UFC career you can see there is some boxing pedigree, however this is against opponents with next to no boxing pedigree. McGregor was offered a few fights by boxers keen to earn a few quid leading up to this match, but declined them all. Accepting any other challenge would of made no sense, he likely would of lost to a solid opponent and his big pay day against Floyd would have been dead.

Unless we’re all about to be conned with a 12 round draw. I can’t see this going any other way than Floyd Mayweather’s 50th career win. I’m actually inclined to go for a knockout win in the last 3 rounds. But, most of all, once this circus is over, I hope that’s the end of these cross sport match-ups. I’d be keen to watch the Cleverly v Jack (a Mayweather Promotions Fighter) on the undercard. However, due to my detest of everything about the Mayweather v McGregor match-up, I’ll give it a miss. I’ll wake up the following day, check the result, see that I was right and then look forward to normal service to be resumed in the boxing world.