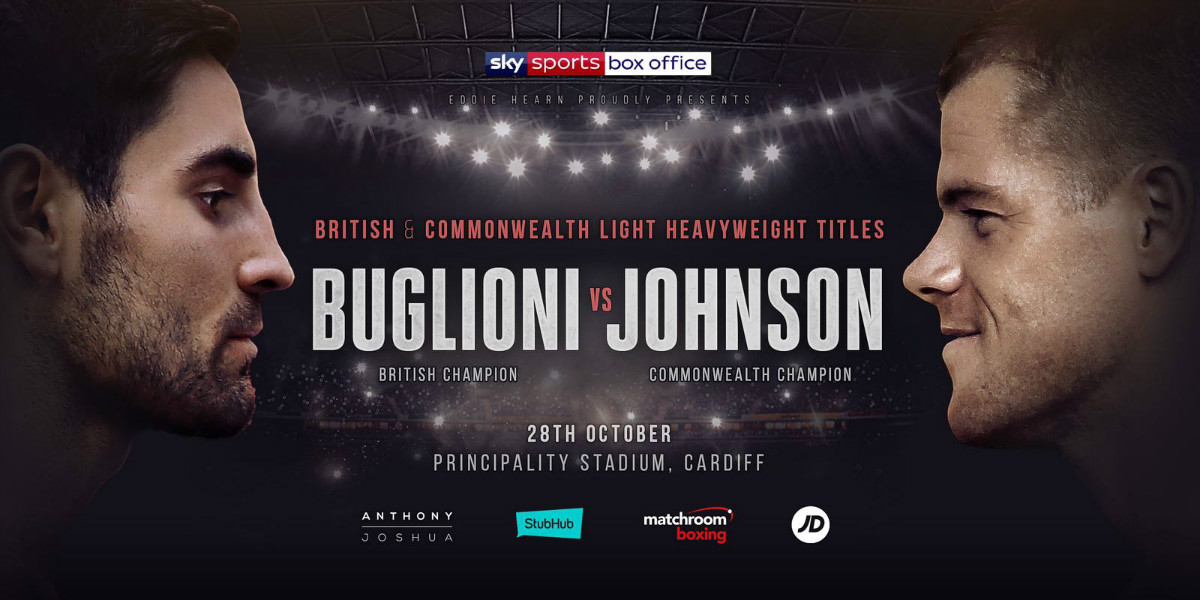 Frank Buglioni and Callum Johnson will clash for the British and Commonwealth Light-Heavyweight titles at the Principality Stadium in Cardiff on October 28, live on Sky Sports Box Office.

Buglioni puts his British title on the line for the second time, having seen off Ricky Summers at The O2 in his first defence in July.

Buglioni picked up the Lord Lonsdale belt in a thrilling fight with Johnson’s Joe Gallagher gym-mate Hosea Burton in Manchester in December on the undercard of Anthony Joshua’s IBF Heavyweight title win over Eric Molina. The ‘Wise Guy’ expects to come through a tough test on another monster Joshua bill, and take a huge step towards claiming the belt for keeps.

“Every bit of silverware I can grab along the way, I will do. The British and Commonwealth Titles go together nicely.

“Callum is a good fighter. All of Joe Gallagher’s stable are well rounded and fit. They come to win. Joe is a good coach, you’ve got take your hat off to him, he’s produced a lot of World and British Champions.

“They know me first hand so will know what to expect but that being said, I’m improving fight on fight. I think I’ll be too much for Callum. I intend to expose his weaknesses, one being his chin.

“I’ll be taking another undefeated record on the way through. The opposition has never fazed me, stiff opposition is what it’s all about.

“It’ll be my first time at the stadium, what an opportunity to be fighting in front of all those people. I love fighting up and down the UK. As an amateur I went all around the world fighting. As soon as I get in that squared circle, I feel at home. Regardless of where any fight is, I’m always ready to do damage.

“The fans can always expect exciting fights with me. Callum likes to come forward, he’s a big puncher so he will be looking to plant his feet. He’s a solid fighter but I’ve got too much for him.

“This mandatory has given me another opportunity to land another belt. Anthony Yarde has been calling me out, Hosea Burton wants the rematch. We’ve got options moving forwards but winning the British title outright is still very much in my plans.”

Johnson has not boxed since picking up the Commonwealth title in his first fight for a belt, but the unbeaten 32 year old believes that those rounds against Shihepo and the scale of the occasion will bring the best out of him.

“To be on Joshua’s undercard is massive,” said Johnson. “I’m looking forward to being a part of the event, it’ll be an honour to box on such a big stage.

“It’s a well-renowned title, every British fighter wants to win it along the way. To be fighting for it on such a high-profile card is an added bonus.

“I rate Frank highly. He’s a strong, good fighter. He’s shown in his last couple of fights he has a big heart and does everything well but I believe I just do everything that bit better than him. If I box to my ability, I’ll take his Title on the night.

“Neither one of us likes to take a step back. We won’t have to go looking for each other. It’ll be a fan friendly fight and it’s sure to be a tough night for both of us.

“Until the mandatory got called, I never really thought about fighting Frank because he had just moved up in weight but now we’re crossing paths so let’s get it on.

“The nine rounds I got in with Shihepo will stand me in good stead, he’s boxed at a high level against the likes of Arthur Abraham. It was my first title fight and I had a lot of pressure on my shoulders through personal reasons. But that’s in the past and now I’m looking forward to this one.”

Tickets go on sale to Matchroom Fight Pass members at midday on Monday September 11 via www.StubHub.co.uk