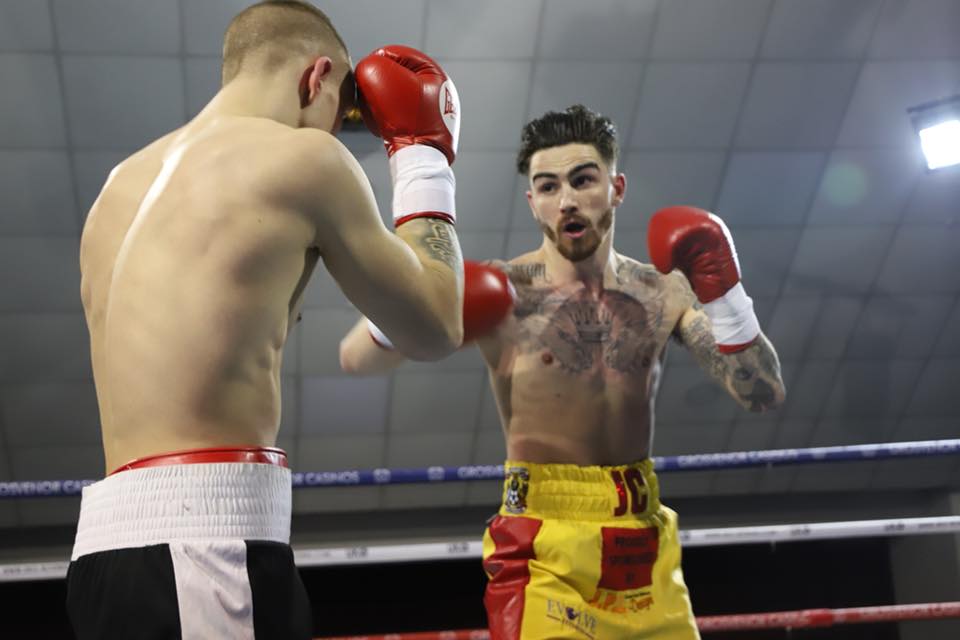 Indi Sangha and Paul Holt made it through to the final where they will compete for the Midlands Area Super Featherweight Title. It will be a repeat of their September 2017 in which Sangha recorded a paper thin 58-56 victory.

Sangha went into the Super Series as favourite, sporting a 7-0 record. He lived up to that billing as he put Fielding to the sword inside just two rounds.

Sangha dropped Fielding at the end of the first round and the contest was waved off by referee for the evening, Shaun Messer, halfway through the second stanza, A big overhand right buzzed Fielding and Sangha, sensing victory, unleashed with a series of blows leaving Messer no choice but to bring a halt to proceedings.

The second semi-final was equally absorbing but for differing reasons. Birmingham’s Paul Holt and Chasetown’s Luke Jones went hammer and nail for six rounds. The contest ebbed and flowed with Jones, the underdog going into the contest, taking the opening two rounds. The Chasetown man looked focussed and fully in control but, as the fight wore on, Holt sparked into life and ultimately proved too much Jones. Messer scored the contest 57-58.

Sangha and Holt will now go toe-to-toe for the Area belt in the coming months.

Elsewhere on the show, Coventry Jordan Cooke and Walsall’s Rachel Ball were both victorious against foreign opposition. Cooke won every round against dangerous Lithuanian Edvina Puplauskas whilst Ball, in only her second professional fight, dispatched of Poland’s Bojana Libiszewska 60-56.