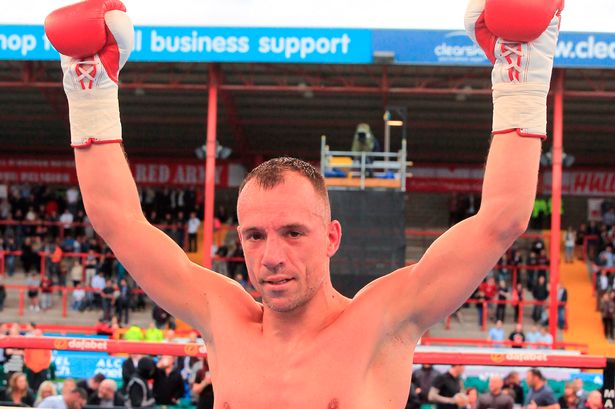 A professional boxer takes his degree by getting punched in the face for free for years as an Amateur, then, unless he won a gold medal at the Olympics, he enters a job market where he struggles to find a permanent contract, often seeing less deserving people advancing in front of him by way of nepotism or recommendation. Yes: just like you and me.

Also like you and me, he has to do crummy jobs while trying and pursuing his dreams and more often than not he eventually cracks under inhuman pressure and just hangs his gloves, like you hanged your guitar, painting brush or whatever.

300 fights veteran Kris Laight (12-279, 9 draws) has an opinion about the fairness of the game but does not see himself as a victim. He has the honesty to admit he wasn’t good enough to get where he wanted but not one time in his career he entered the ring with the intention to lose. And make no mistakes: a man who gets stopped only 5 times in 279 losses knows how to fight. But, time waits for no man and Kris felt his body could not take it anymore and decided to call it a day with the end of last season.

We took the chance to sit down with him and discuss his career and we are glad to report that, although with a few regrets, this man deservedly holds his head up high.

BB: How did you get into boxing?

KRIS LAIGHT: I was a fan before anything else. I used to watch Lennox Lewis, Prince Naseem Hamed, Joe Calzaghe and Robin Reid. I liked boxing so much I decided to give it a go and see what I could do. I was a late starter, though, and began training when I was 19 years old.

BB: What is your Amateur background and how did you decide to turn pro?

KL: I trained for 1 year then had 10 Amateur fights over 2 years. I turned pro when I was 23 after I got an offer from a very old school character named Sid Reynolds. “Why boxing for plastic trophies when you can do it for money?” he said. I was in a dead end job at the time, making 120 pounds per week. I was one of 4 children still living with my mom, who was on her own. We did not have money so I didn’t think twice.

BB: Were those economic circumstances the reason why you became a journeyman?

KL: Not at all. I didn’t know what a journeyman was. I mean it: I did not understand the meaning of the word until 1/3 into my career. Only then I realized I had become one and not by my own choice. I went into the pro game blindfolded. I was fighting former ABA champions and Olympians from the very start but with only 10 Amateurs fights I did not have the skill set to compete. I wasn’t good enough. But it was too late at that point and I never looked back since.

BB Were you at least able to make a comfortable living?

KL: Absolutely and that’s why it became my job for 15 years.

BB: What weights did you campaign at?

KL: I started as a Light Welter but I went from Super Feather to Welter, as required. It was my job, I did not have the luxury of choosing. If I had to lose 5 pounds in a week in order to get work, I would just do it. I finished as Light welter, though. I came full circle in the end.

BB: Your record shows 5 stoppages in 279 defeats. What defensive tools or tactics did you rely on to last the distance?

KL: With experience you learn what to do and when to do it. I had a whole bag of tricks like taking a long walk or using a low blow to buy a few seconds if in trouble. Also, talking to the opponents and playing with their mind by telling them they can’t punch often worked to slow them down.

BB: Were you ever able to study your opponent in advance and enter the ring with a game plan?

KL: You don’t have that luxury when fighting at short notice. The study was the first round of the fight and then I had 60 seconds to come up with a game plan.

BB: Nevertheless you had 12 wins and 9 draws, mostly against debutants or prospects with a winning record. What was different in those fights?

KL: All 9 draws and at least 10 of my losses should have been wins for me. I never got in the ring with the intention to lose, never. Not once in 300 fights. I always went for it and gave my best and if they were not good as they were supposed to be, then they would get found out. Also, the Boxing Board is always watching. If you have too many losses, you get called in and questioned. There is a good way of losing and a bad way. The good way is to be competitive, have fun and hear the final bell. The bad way is looking bad, getting caught and being stopped or knocked out and that might prevent you from fighting for months. As I said, it was my job and I needed the money.

BB: Lee Purdy, Ryan Barrett, Gary Sykes, Tyron Nurse, Tommy Coyle … The list goes on. Of all the prospects you fought that went on to win titles, who impressed you more at that stage of their career?

KL: Kevin Mitchell, Martin Gethin and Lewis Ritson . They all had a great Amateur background.

BB: And among the prospects you fought in the past year, who would you tip to go on to big things?

BB: As an insider, what is your assessment of professional boxing overall? Is it a fair game or is it only about money?

KL: It is a sport only if you enter it as a stand up Amateur and got Eddie Hearn or Frank Warren behind you, for anybody else it’s just a business. No matter how good you are, if you can’t sell tickets chances are you will end up down my road.

BB: Did you retire in good health and with enough savings?

KL: I still have all my marbles and am fit and healthy. I came away just at the right time.

BB: Is there anything you would do differently if you could go back?

KL: I would have more Amateur fights and turn pro only when I am really ready. But I know I really did my best and that’s more than some world champions can say and all that matters in the end. I gave my all.