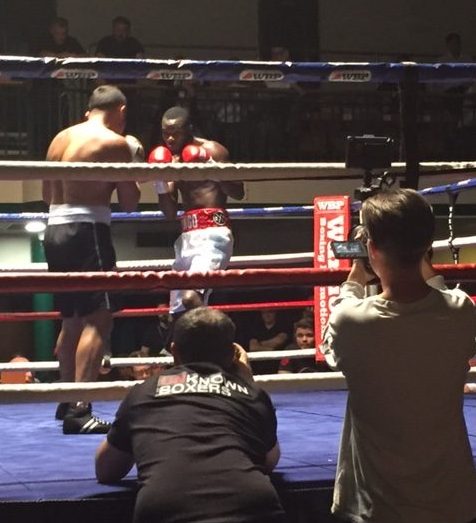 In an outstanding night of boxing, at Bethnal Green’s York Hall, top rated welterweight prospect Chris Kongo maintained his perfect record with a tenth career success. Back in the old days, when Terry Lawless oversaw boxing in these parts, he titled his York Hall shows: ‘The stars of tomorrow.’ It is an era that will be clearly recollected by Herol ‘Bomber’ Graham and Colin ‘Sweet C’ McMillan, who were both present at ringside on Saturday night.

Performing on the show were a number of young fighters who undoubtedly have a big future in the fight game. First and foremost of these is Bermondsey’s Chris Kongo. The man known as ‘2Slick’ lived up to his ring name by administering a six round beating to the unfortunate Adam Grabiec in a display that combined enviable poise and movement with jolting power and quick fire combinations. His outgunned and outmanoeuvred Polish opponent should be commended for remaining upright throughout the 18 minutes of one-sided action.

So dominant was Kongo’s performance, that Herol Graham – who was sat just a couple of seats from me – suggested politely to the referee several times that it might be an idea to stop proceedings. That he clarified it on one occasion with “I just don’t want to see him get hurt” reminded me of what a bighearted champion ‘Bomber’ was and still is. The action in the centre of the ring had the former British, Commonwealth and European champion purring as he excitedly called out combinations to the ether.

Grabiec, may possess a limited record, but he is granite tough, and has established for himself a role as a decent marker for boxers ready to move up to the next level or to re-establish themselves. This is evidenced by recent appearances against the likes of: Mark Heffron, Larry Ekundayo and Mark Thompson. Kongo ably bossed his foe throughout every three minute burst of their six-rounder. Over a longer route of eight or ten rounds, there can be little doubt from anyone at ringside, that ‘2Slick’ would have secured a stoppage verdict.

This victory, coming on the back of a one round demolition of Arvydas Trizno at the same venue back in June, will surely mark the 25 year-olds final appearance over this intermediary distance. Originally scheduled to challenge Louis Greene for his Southern Area belt on this card; the bout was postponed due to Greene suffering an injury.  There was a further recent disappointment of missing out on an appearance at Wembley on the Joshua vs Povetkin undercard due to late scheduling difficulties. But, despite the obvious frustrations, the Jim McDonell trained welterweight is clearly going places and will be odds-on to secure his first title next time out.

Elsewhere, on the card, fellow welterweight Jez Smith improved his record to 11-0-1, following his second victory of 2018. His game opponent Anthony Hardy probably did enough to nick the opener despite Smith landing a solid right-hand early on. The fight quickly evolved into an enjoyable dustup in the second before the Harrow fighter tagged Hardy with another heavy right in the third and sent him freewheeling into the neutral corner, to take the referees count.

Hardy’s resilience in surviving the round under continuous pressure from Smith was admirable, although he did touch the canvass twice more under the influence of some Greco-Roman moves from Smith that the referee did not register as knockdowns.

Through the fourth and into the fifth, Smith was hitting home with alarming regularity. Routinely, forcing the jab through his overwhelmed opponents defence and landing liberally with his solid right hand. It was one of these blockbusters that put Hardy down again in the fifth; bravely rising to beat the count, he found himself down again in short order. As the referee stood over him, he steadied himself on one knee, but rightly opted to stay there as the referee reached 10.

This was an impressive, crowd pleasing performance from the 24 year-old. The well supported, Mo Prior Managed fighter, is also keen to move onto the next step. Following a hard fought draw in an all-out war with unbeaten Macaulay McGowan, in a Frank Warren promoted contest, two years ago, Smith could be forgiven for thinking that his career may have kicked on from there. However, like many others, he has faced the frustration of cancelled opportunities, most notably at the Southern Area level.  It is difficult to believe that his chance won’t come soon.

Battersea’s Denzel Bentley continued the explosive start to his career with yet another 1st round termination. This is the middleweight’s fourth 1st round stoppage in a six fight career that has only seen him travel the full distance on one occasion. His opponent Daniel Urbanski, maintains a respectable record despite a long losing run, but was outgunned from the outset and dropped heavily by a right-hand in the opening seconds. He subsequently founds himself on the canvass twice more before the last rites were accorded after only 61 seconds. Just 12 months into his professional career the 23 year-old is already looking in need of stiffer challenges and it wouldn’t be a surprise to see him challenging for titles next year.

Other highlights on the stacked 13 fight card included a third career victory for super lightweight Alfie Price. The 24 year old walked out to the unmistakable tones of ‘Chas & Dave’ in what was perhaps a public tribute to the late, great Chas Hodges. The former team GB amateur caused Nigerian opponent Innocent Anwanyu constant problems throughout a six round shutout, where he showcased an appealing combination of easy movement and stamina zapping power.

Meanwhile, Luton welterweight Alex Bishop, impressed once again in dominating Slovakian opponent Ivan Godor. The 23-year old, with an easy on the eye style, hurt Godor in the 4th, but the Slovak managed to whether the prevailing storm. It was no surprise when Bishop picked up the verdict by 40-36 to notch up his second career success.

Debut wins were collected by both Louis Lye and Mason Smith. Lye opened up strongly and downed opponent Norbert Szekeres in the 1st under the sheer weight and frequency of his punches. Despite, making the count, proceedings ended just a minute into the 2nd with Lye achieving the knockout, following fast-handed salvos to the body to which the Hungarian had no answer. Lye was helped in his progress by the willingness of his opponent to come and fight, rather than to merely survive the scheduled four rounds of competition.

22 year-old Smith, who represented England as an amateur and was part of the team GB setup, took on the canny and durable Rudolf ‘Soldier Boy’ Durica over four rounds at super lightweight. Smith, searched for the big payoff from the opening exchanges onwards, and despite having his Slovak opponent in trouble on more than one occasion; Durica was able to employ all of his knowhow to see the contest through to the final bell. The resulting shutout on the scorecards was merely a formality following Smith’s control of the four rounds of action.

In a battle of the debutants, Edinburgh based Mac Pemhiwa met Conor Hinds in a super middleweight contest scheduled for six rounds. Pemhiwa, appeared to be the more accomplished and slicker performer and had Hinds in trouble in the 2nd of what was a free-swinging and wide open contest. However, despite his limited finesse, Hinds achieved a stoppage in the 3rd when unloading his full arsenal on Pemhiwa and trapping him in his corner. Pemhiwa didn’t look especially hurt but as he absorbed multiple punches to the head, without delivering anything back, the referee was forced to intervene and bring the contest to a premature conclusion.

Hinds is to be congratulated on the win, but many ringsiders will probably conclude that this is a fight that the Zimbabwe born Edinburgh fighter should have won. A mood reflected by the sight of a distraught Pemhiwa, head bowed in his corner, in the moments before the referee raised his opponents arm.

Other results on the card: