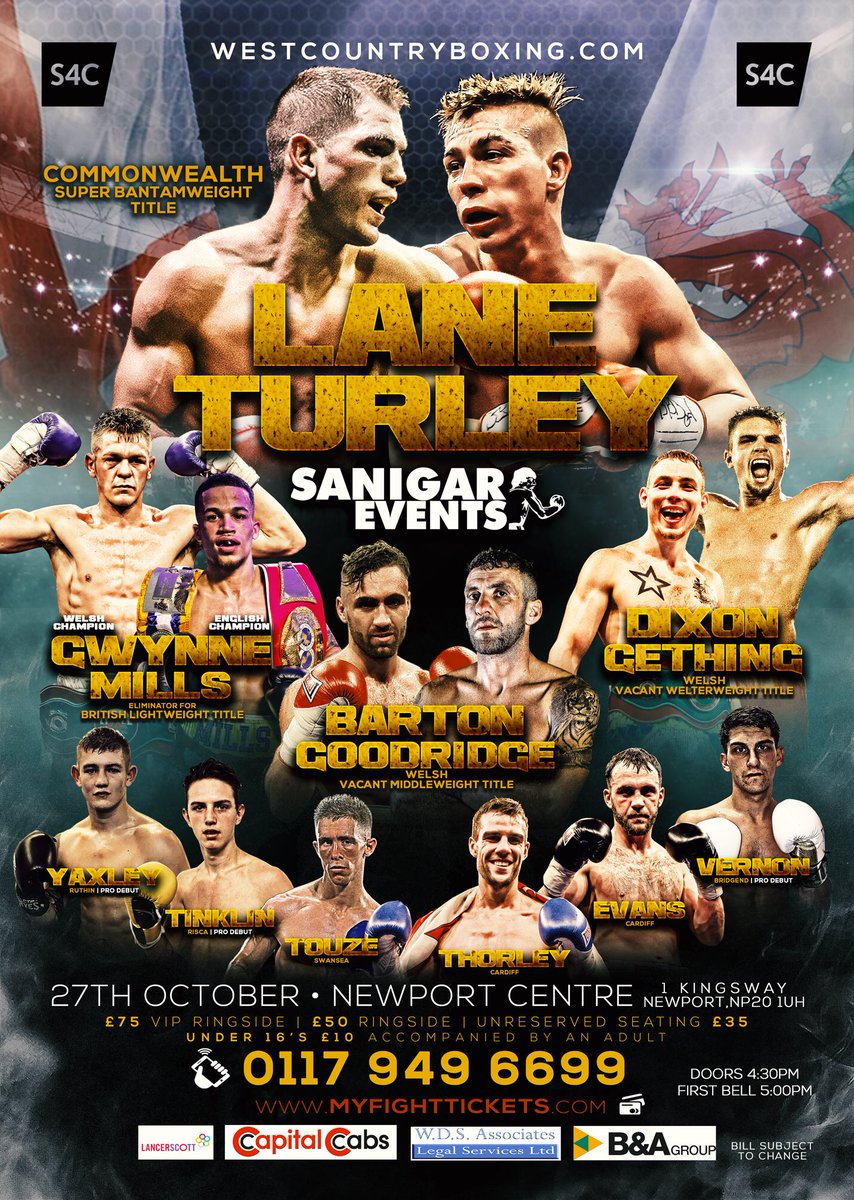 Sanigar Events night in Newport features four 50/50 fights and an undercard packed with up-and-coming talent featuring Olympic and Commonwealth medal winners.
A Commonwealth title and two Welsh titles will be on the line in S4C’s latest free-to-air fight night.
The Welsh television channel will be broadcasting the Sanigar Events card on Saturday, 27 October, live from the Newport Centre.
The Bocsio Byw (Live Boxing) programme will feature Welsh language commentary, with English language commentary – provided by former World cruiserweight champion Enzo Maccarinelli and John Hardy – available via the red button service.
Topping the bill is the Commonwealth Super Bantamweight title bout between hometown fighter Robbie Turley and Bristol’s Ashley Lane.
Tony Dixon, of Mountain Ash, and Kieran Gething of Pontypool, will fight for the vacant Welsh welterweight title.
And it will be Wales versus England in a lightweight eliminator contest as Gavin Gwynne, from Trelewis and Myron Mills, from Derby, battle it out, with the winner moving on to fight for the prestigious British Lonsdale belt.
The programme will also round up the evening’s other fights, including a bout between Fred Evans who has his sixth professional fight against Ryan Toms, and fights for Nathan Thorley and EBU Super Flyweight champion, Ashley Brace.
Update: Unfortunately the bout between Newport’s Daniel Barton and Port Talbot’s Geraint Goodridge for the Welsh middleweight belt, has been cancelled, after Daniel Barton was taken ill recently and is currently in hospital suffering from pneumonia and sepsis, so has been in intensive care for the past six days. We wish Daniel a speedy recovery.
The event is the third live night fight to be shown by S4C in the last 12 months, having previously shown two Sanigar Events cards, in Merthyr Leisure Centre last December, and the Cardiff Ice Arena in April this year.
S4C is available to watch throughout the UK on Sky (channel 104 in Wales, 136 in the rest of the UK), Virgin TV (channel 166 in Wales and the rest of the UK) and Freesat (channel 104 in Wales, 120 in the rest of the UK).
Bocsio Byw (Live Boxing) – Saturday 27 October, 8.15pm
English commentary and subtitles available
Available to watch on-demand at s4c.cymru, iPlayer and other platforms
A Media Atom production for S4C