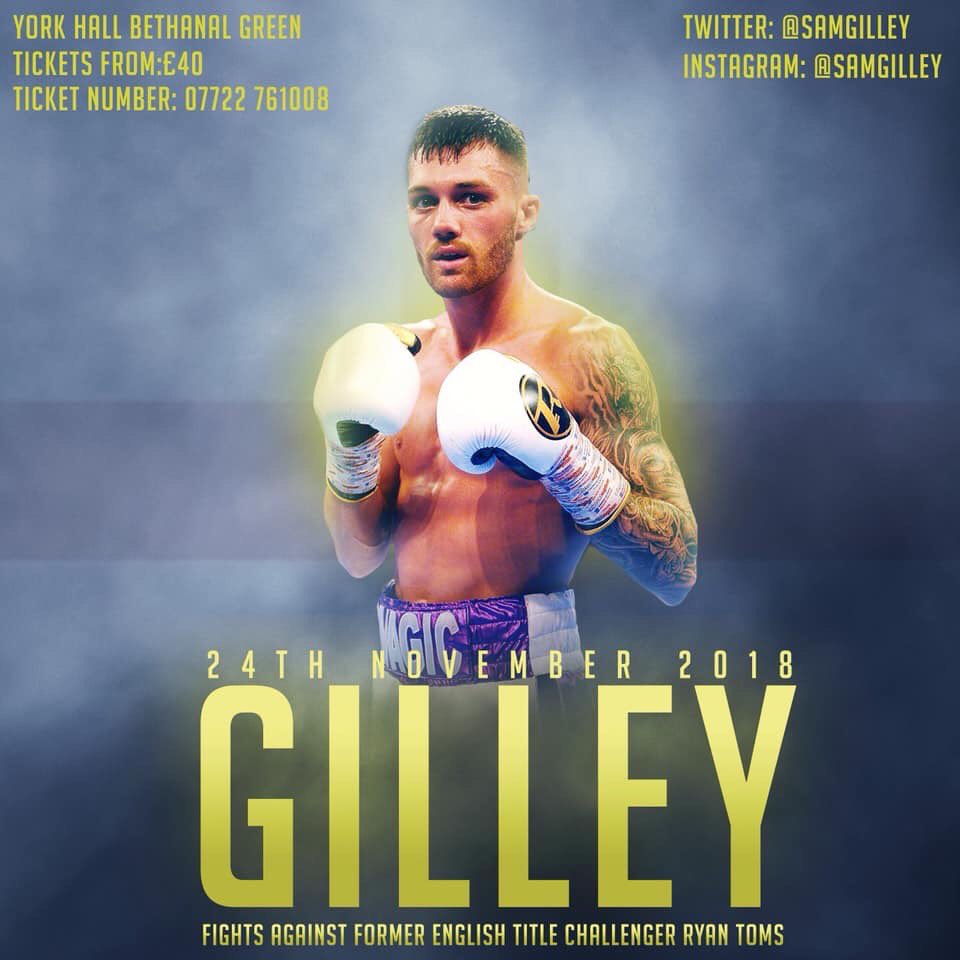 Sam Gilley takes to the ring this weekend at London’s famous old York Hall looking to add to his unbeaten record. Now a professional for nearly two years, the Walthamstow welterweight has notched up six straight wins under the tutelage of coach, manager, mentor and all-round best mate Rod Julian.

The fighter to trainer bond is so close that Gilley jokes: “Rod always says that he sees me more than his wife. We are in the gym all day every day, Monday to Saturday. If he is free on a Sunday I will often bump into him for a bit of lunch. You know; accidently on purpose.”

Gilley tells British Boxers that his rise up the UK rankings can be directly attributed to Julian, who runs RJ’s Gym in Loughton. “If it wasn’t for Rod I wouldn’t have none of this. He has sorted me out with everything, including sponsors,” he says.

The 24-year-old is remarkably honest about how he first got involved in boxing following a form of trial and error at numerous other sports, “It was because I wasn’t any good at anything else,” he says with a smile.

“I tried playing football, and still love it, but I was never a talent. I tried basketball as well in school, but I was about 5”2 back then, so I didn’t do much there either. One of my friends suggested I go down the gym and try it, and that was it from there.”

So, did Gilley take to boxing straightaway in the way that he didn’t with these myriad other sports?

“No I didn’t,” he says amidst more laughter. “But I did fall in love with it straight away.” He goes on to explain, “There were loads of kids from my local area there and it was more like a sort of youth club. We just spent all of our time there.

“I was 11 when I started, but didn’t really develop with it until I was 16. Then it was like playing Sunday league football. I was matched lots, and every weekend I would be off fighting somewhere. I won a few and lost a few, but learnt loads.”

But despite Gilley’s modest assessment of his amateur career he went on to represent London, and did what he calls, “the whole England Select thing,” on his way to building up a solid record in the seniors.

In a familiar tale Gilley drifted away from the sport when he hit 18, and armed with his first pay cheque, hit the pubs and the clubs instead of the gym. It was then that boxing reacquainted itself in the form of Rod Julian:

“A mate asked me why I wasn’t boxing anymore and that I should get down to RJ’s. I went down there and sparred with a few pro’s and did well against them. I think Rod took an immediate shine to me and he said ‘Look, if you really knuckle down, you can turn over easy.’ That is all I needed to hear to get me 100% focused again.”

A renewed focus that led to his professional debut back in July last year. Appearing at the York Hall, deep on the undercard of Wadi Camacho’s English cruiserweight defeat to Arfan Iqbal, he faced off to canny Slovakian journeyman Rudolf Durica. The slightly built man known as “Soldier Boy” is a York Hall staple, with his familiar cap that only ever appears to be removed for fighting, and his straggly beard. He didn’t look like much of an opponent to the inexperienced Gilley.

“I went in there after two unlicensed fights and had knocked both of those boys out. I thought all I would need to do was to touch this small fella and he would go down easy. But I was badly wrong,” he concedes.

“I hit him and he just smiled. It was so hard to nail him clean. He is honestly the most awkward man I have ever been in the ring with. He fought the whole fight with his head between his legs! Whenever I stepped forward he just ducked down and threw his arm up in the air.”

With a hint of admiration Gilley discloses: “These journeyman in the pro game are a different level.” A theme that continues as we discuss his most recent opponent William Warburton. The 31-year-old can honourably be placed among Britain’s premier journeyman and is fast closing in on 200 professional contests. Despite a record that is heavily in the negative, Warburton has been known to pull off shocks and has derailed numerous unbeaten prospects.  He is therefore a good marker for all inexperienced, rising professionals.

“What a tough, tough bloke,” muses Gilley. “I love my body shots and I hit him clean in the ribs four or five times. He didn’t even wince! I have no idea what he is made of. He is very slippery and difficult and it’s no surprise that he picks up results.”

But from the blue-collar workaday realms of the likes of Durica and Warburton, Gilley has also mixed with some of the fight-games aristocracy. He talks in awe of a sparring session with former IBF welterweight world champion Kell Brook. In animated tones he describes the scene:

“I got in the ring with Kell and he just stood still. He doesn’t seem to do anything, but just stand there. But every punch he takes a little step forward and pushes you onto the back foot. He’s throws punches and you just can’t hit him.

“I thought ‘Oh my God!’ He has strength and a great technique all gelled into one. It was such a great experience.”

And of two time IBF super middleweight champion James DeGale, he says: “He’s great. Everything he does is classy. He just went for a little walk for 10 seconds and them bam!! He hits you with 15 punches.”

The 24-year-old is now in the enviable position of being a full-time professional. Something that is only possible with the financial help of his sponsors. A topic that he discusses with obvious gratitude as he reels of the ever growing list*. “Without them I would still be working as a gardener in the pouring rain somewhere,” he jokes.

Saturday will mark another step up in competition for Gilley as he takes on twice former Southern Area belt holder Ryan Toms. His vastly experienced opponent has 16 wins in 34 contests, and despite being on a steady downward spiral in terms of results, still has it within his armoury to pull off a major surprise. Something that was starkly evidenced by his recent stunning two round success over Wales’ Olympic silver medallist Fred Evans.

Amidst this backdrop, Gilley is not taking the dangerous punching Toms lightly, and perceives him as his stiffest test yet. “He is a very credible opponent. He can definitely punch and bang that left-hand,” he says.

But he is very clear that Toms presents the perfect test for this stage of his career:

“You look at the boys that have beat him. It’s basically anyone that wants to push on to a decent level. They all find a way to get by him. Anthony Fowler stopped him in two.

“He really is a great test to make sure you are ready to push on to the next level. We are doing this step by step. I think I will learn more that way and have a longer career.”

Assuming that he gets past this weekend’s challenge, Gilley has the Southern Area strap at the top of his wish list for 2019. With the likes of Chris Kongo, Jez Smith and Adrian Martin also pushing for this, the emerging domestic welterweight scene is in great shape.

With area, English, and sometimes even British titles perhaps lacking sufficient lustre for some home-grown talents, Gilley is adamant that he wants to take the traditional path to success. “There is nothing wrong with going down the old fashioned route. You can learn more from that than fighting a guy from Mexico for some kind of inter-continental title,” he says.

“I am realistic and not looking to jump straight to world level. I try to set myself realistic goals. The first was just to turn pro and now it is to win the Southern Area. If I am honest the one I really want is the British. I have it as my phone screensaver. It’s gorgeous and I’ve never even held it,” he says wistfully.

Gilley ends by saying, “How could anyone not want that Lonsdale belt? I don’t know.” Maybe one day soon he will have one of his own and it will be more than just a coveted picture on his phone.