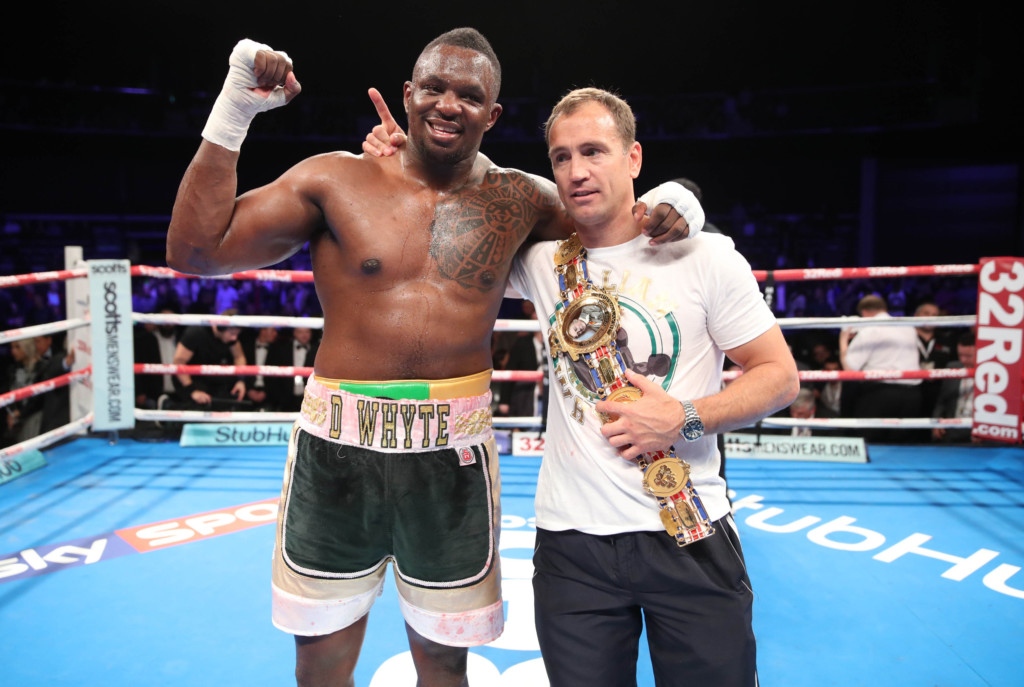 “What’s good about Dillian is he’s a natural fighter, he’s got that in him.”

Heavyweight boxer Dillian Whyte has been patiently waiting for his shot at a world title for some time now and when he knocked Dereck Chisora out in spectacular fashion at The O2 in December of last year, many thought his time had finally come.

Anthony Joshua, who beat Whyte in December 2015, has been booked to fight at Wembley Stadium on April 13th and with Deontay Wilder and Tyson Fury rumoured to have a rematch after their controversial draw it looks as if they might both be out of the equation. As Dillian Whyte is now No.1 in two governing bodies, the WBC and WBO, and Wilder and Fury looking as if they will be unavailable for April, for me the logical choice would be for Anthony Joshua to defend his world titles in an all-British affair at the national stadium.

After the fight with Chisora, Whyte called out Joshua who was commentating for Sky Sports that evening. Joshua told Whyte that Wilder was his target but if he couldn’t get him then Whyte would get his chance. The fans at The O2 showed their displeasure at Joshua’s comments by booing the unified heavyweight champion of the world.

I caught up with Mark Tibbs, Dillian Whyte’s trainer, at the world famous Peacock Gym. Over a pukka cup of tea I asked him about the conversation Whyte and Joshua had that evening.

“It’s obvious what’s gone on. He’s thought he’s come up to seal the deal for April and he’s said to him get in line son, wait your turn. I know Dillian’s character, he ain’t stupid, he’s walked away and done the right thing”.

Dillian Whyte rose to No.1 in two governing bodies in an unorthodox fashion. He beat Dereck Chisora twice and beat two former world champions: Lucas Browne, undefeated at the time, and Joseph Parker. He is the only fighter to have dropped Parker in competition or sparring and the first to hurt Joshua in a professional ring and go more than three rounds with him. The fight ended with AJ knocking out Whyte in the seventh round. He is also the only boxer to have conclusively knocked out Dereck Chisora in the Finchley fighter’s 38 fight career. I asked Mark what he thought was the main difference between Whyte and the other top heavyweights in the division.

“He’s got no amateur pedigree like all the others have – but he’s got drive, a great work ethic and in his training sessions he’s a good worker. I like Dillian’s street nature and the way he is as a human being. He wants to be a winner no matter how and his self-belief is on another level.”

To compare Whyte’s amateur record to the other top heavyweights in the division makes for interesting reading. Anthony Joshua had 43 amateur fights before turning professional, Wilder and Fury 35 each. Luis Ortiz had 368 amateur fights, Alexander Povetkin 132. Joseph Parker had 66 amateur fights and undisputed cruiserweight champion Oleksandr Usyk, widely reported to be making the move up to heavyweight, 350.

Before turning professional, Dillian Whyte had only seven amateur fights. To be in the position he is in is an incredible achievement already. If he were to go on and win a world title, it would go down as a great performance, not only for the fighter from Brixton but also for his trainer and team. I asked Mark how he has dealt with training Dillian with regard to his lack of amateur experience.

“What’s good about Dillian is he’s a natural fighter, he’s got that in him. He’s had kickboxing experience and he’s also got great agility. He’s been to the Klitschko camp, he’s been over to America to spar and it’s all experience. He’s done amazing for only having 7 amateur fights.”

It has been said before that Whyte didn’t need to take the fights with Parker and Chisora. He could have waited for his title shots without those fights but the fact he stayed active and will fight anyone has endeared him to boxing fans the world over. I asked Mark if he thought his willingness to fight all comers could jeopardise his shot at a world title. It is heavyweight boxing, where one punch can end a fight and Dillian would have to start over again if he lost. “With the Chisora fight, people had said to me ‘Mark, he’s mad to take that, why don’t he just wait around?’ but I think he’s an example to young fighters. Are you in the business to learn and earn or do you just want to be a trophy champion or a play-about boxer? You know, he’s a fighter and that’s what real fighters do. With the Chisora fight we thought to ourselves, the public want it, Sky want it, he wants it so let’s have it ’cause we know how to put this guy away and shut everyone up and that’s what we did.”

I asked Mark about the performance against Chisora.

“He handled that well, Dillian. At some point in the fight he said “Mark, don’t worry I’m gonna start pressing him in the middle rounds”. He went out to fight and I asked someone in my corner “What round is this?” ’cause I thought middle rounds? I think we’re there already! They said “tenth round coming up Mark”. So he comes back after the round and I said listen, we gotta get the job done son, it’s a bit tight and in the 11th he went out there and knocked him out, beautiful.”

I asked Mark how he thinks Dillian has improved since losing to Joshua just over three years ago. “He’s learning to be less reckless and more intelligent in the way he goes about his work. He’s understanding the different builds in front of him, the ranges and the lengths and how to overcome different styles. I wasn’t involved with Dillian then but I could see that it was all emotions – not bravado, but it was an emotional fight for him. Dillian’s more mature and he has to be if he wants to fight at the top level – now he’s less emotional. We need some emotion but he knows how to control it and handle it. He’s gone away, licked his wounds, been willing to study his craft and that’s all credit to him. That takes a very special individual. Now he’s got that chin dipped and there’s a side to Dillian which has still got to come out and he’s gonna be the worst nightmare for anyone, I’m telling you. That’s what good champions do and I believe he can do it. I feel that Dillian has got an element to his game that’s not gonna be very nice to the opposition out there.”

I asked Mark if he thought we could end up with a barnfest between Joshua and Whyte just like the first fight as emotions could run too high with the clear mutual dislike between the two of them. “Not from our side it won’t, no way. We ain’t come all this way physically and emotionally to go back to where Dillian was. We have to have a style that that style’s not gonna like, and we’ve got it. Dillian will only get better. I don’t see Wilder or any of the others getting better but I know that Dillian can only get better.”

Dillian Whyte has been the underdog in a lot of his fights and, considering his lack of amateur experience it’s understandable why this is the case. Since losing to Joshua he has won nine fights. As the Brixton boxer continues to improve in the heavyweight division, surely that world title shot can’t be too far away.