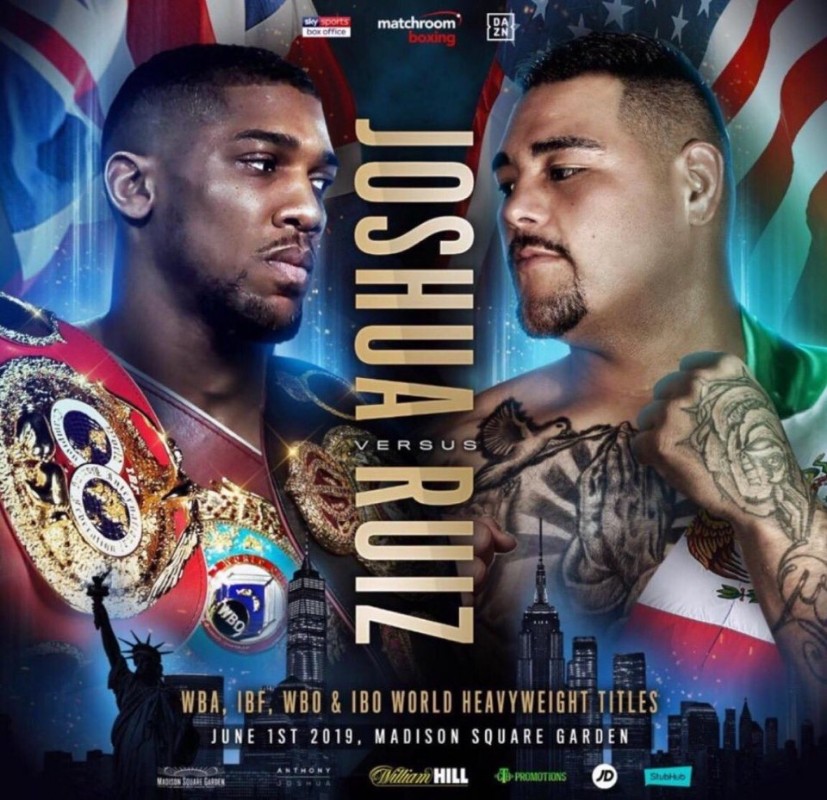 Ruiz more than fits the bill for AJ’s next opponent says Matt Lewis. Here’s why.

Late replacements are a promoter’s nightmare. As Andy Ruiz Jr is revealed as the replacement opponent for Anthony Joshua’s stateside debut next month, there is still the lingering sense of a failed opportunity, of the fights that could (should?) have been. Ruiz Jnr is competent, but he is not the heavyweight challenger the boxing public asked for, nor is he appropriate, either to compete for AJ’s collection of world titles or to announce him to the American public.

Yet, Ruiz Jr is the heavyweight challenger we have. And despite our misgivings, he probably deserves a little slack. After all, it is he who must try and clear up the mess left behind by someone else, Jarrell Miller, who failed three separate drug tests en route to having his licence revoked and his reputation irreparably tarnished. With this in mind, and with event preparations well and truly underway, is Ruiz worthy of embracing as a late replacement?

As long as the circumstances of his selection are kept in mind, Ruiz more than fits the bill. Here’s why.

Back in 2016, Ruiz travelled to New Zealand to face Joseph Parker for the vacant WBO belt, in his first venture outside the USA and his first scheduled 12 rounder. He gave the home favourite plenty to think about as a close fought contest ended in a majority decision defeat, the first (and only) loss of the American’s career. Add the world title shot to extended stints as a WBO Inter-Continental and NABF champion, and you have a heavyweight that has at least been proven to some extent on the international stage.

Ruiz has beaten the right people

Joseph Parker aside, Ruiz has beaten everyone he has faced, including those fighters you need to be beating en route to a world title shot. Although the notable names on his CV are mostly wily veterans, he has nevertheless dealt with them accordingly. Former champion Siarhei Liakhovich and two-time challenger Kevin Johnson were both beaten over 10, while Alexander Dimitrenko, a former European champion, was bullied into a 5th round retirement for a career best win. This is nothing out of the ordinary; you’d expect a semi-serious heavyweight to be beating this level of opposition. But the point is, he has, and thus deserves to be considered as one.

That career best win over Dimitrenko happened only two weeks ago, and Ruiz emerged from it essentially unscathed. As a result, he is still in shape from his previous camp, and six full weeks of preparation for Joshua will bring him right back to where he needs to be in terms of his fitness.

He’s ranked with the governing bodies

Self explanatory. He was already ranked by the IBF when he defeated Ray Austin in 2016; this win shortlisted him for a title fight with Joshua or, failing that, an eliminator with Kubrat Pulev, but neither opportunity materialised. He is currently ranked 11th with the WBA and 15th by the IBF.

Looking at the top contenders in the relevant governing bodies reveals there is limited choice. Deontay Wilder, Dominic Breazeale, Tyson Fury and Dillian Whyte are all spoken for. Alexander Povetkin and Joseph Parker have already been beaten by Joshua. Kubrat Pulev has been suspended and may be facing legal issues after forcibly kissing female reporter Jenny SuShe during an interview. Luis Ortiz priced himself out of the fight, before pricing himself back in too late to be re-considered. Oscar Rivas and Tom Schwarz are facing Whyte and Fury respectively, while WBA regular champion Manuel Charr hasn’t fought since 2017 after a drugs ban of his own… you don’t have to go too much further before you get to Ruiz. Guys like Adam Kownacki and Michael Hunter may feel somewhat left out, but Ruiz is of similar pedigree, and would himself feel aggrieved if either one had been chosen over him.