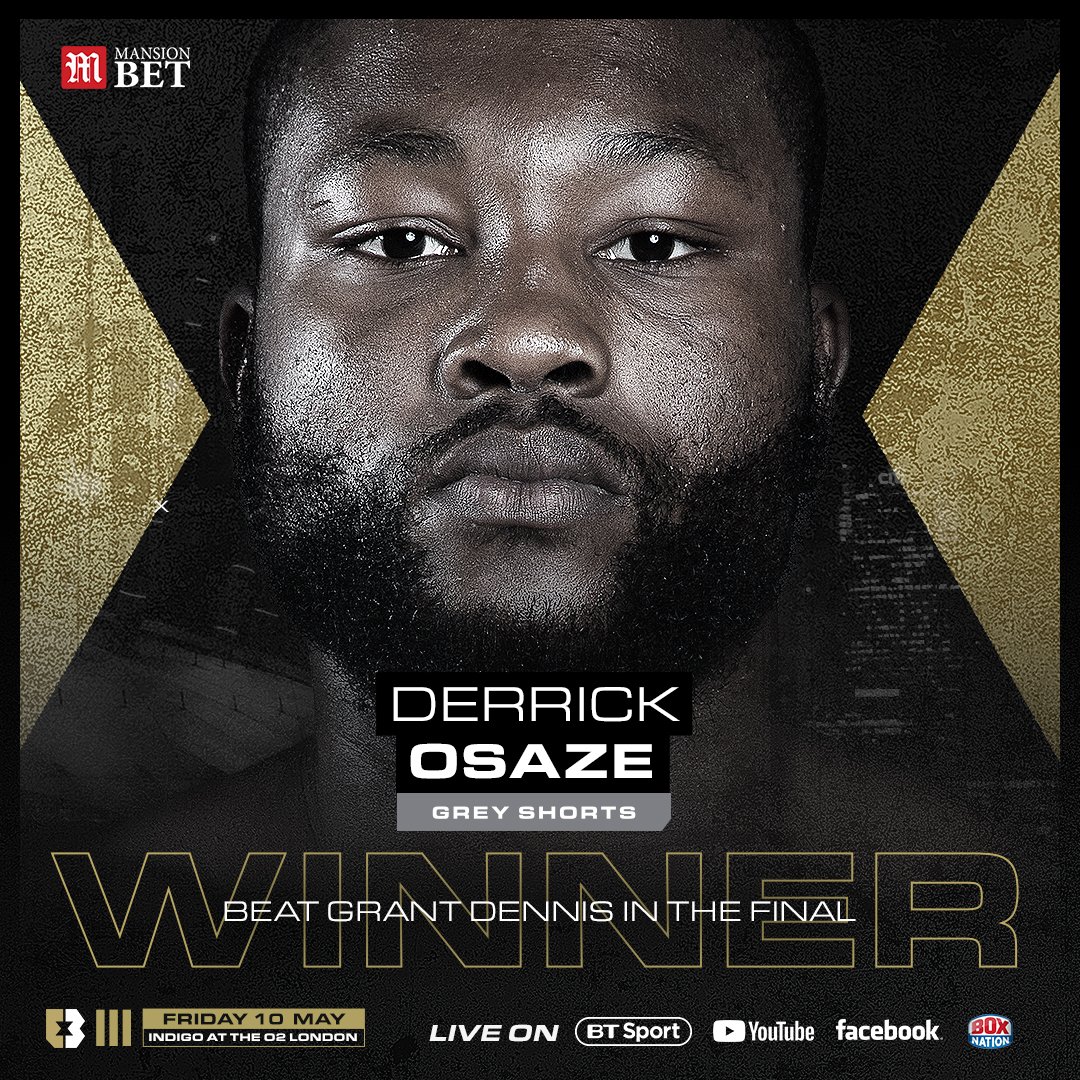 It wasn’t perfect but it was fun. There were some minor technical issues and a few debatable decisions but if you accept the premise that Ultimate Boxxer’s main purpose is entertainment then the show was again a success. The key is Carl Greaves’ understated ability of selecting and matching unheralded fighters in a way that produces a nonstop reel of knocked down filled wars. This of course being complemented by the fighters’ own hunger and urgency to establish clear dominance in the short space of three rounds.

This third instalment once again took place at The Indigo at The O2 and for the first time live on BT Sport. We review all the action as Nottingham based Minister Derrick “The Punching Preacher” Osaze fought his way to the pinnacle of this edition of the eight man elimination tournament under the 160 lbs limit .

Both contestants were coming up from Super Welter. Hawes was aggressive from the start pressing his opponent in order to nullify his reach advantage. Conway appeared frustrated in the first round as he could not find his range but Kaan’s own work was smothered in the process. Kieron was able to adjust and land the cleaner shots in the second, being also more effective at close quarters while Hawes seemed to tire after an impetuous start. In the third, the man from Northampton was easily evading his opponent’s punches while overall controlling the action and winning a unanimous decision by scores of 30-27 on all three scorecards.

On paper, experience and age advantages seemed stacked in favour of former Southern Area Middleweight champion Linn Jones but Osaze was unfazed and composed as he found the target over and over with long and short hooks while Tey was over eager and missing. And also cut over the right eye by the end of the first round. The Punching Preacher knocked his man down in the second with a right hook but instead of going for the kill he picked the opponent apart systematically. Linn Jones went for broke as he should have in the third but his sight was clearly affected by the blood pouring from his wound. The fact that Osaze deliberately rubbed his glove on it on a break surely did not help. Neither did his hooks still landing at will that saw Derrick moving to the semi final with scores of 29-27 on all three cards.

It was one way traffic as Phillips went out all guns blazing with very little coming back until hurting Groombridge on the ropes with a solid right hand and following up with a barrage that forced the referee to step in and halt proceedings at 2:22 of the first round.

There was genuine suspense in the ring as the MC had a few moments of hesitation before shockingly introducing Grant Dennis as Josh Groombridge. Dennis was the more accomplished fighter in the roster, entering the competition as a former English and Southern Area champion, but it was Hurn to edge an uneventful first session by landing a couple of punches more. Grant took over the second round by connecting more often and with harder shots, eventually knocking Joe down in the third with a right hook flush on the jaw. Groombridge beat the count but was still visibly hurt and the referee correctly stopped the bout at 2:38.

Sandwiched between quarter and semi finals, this Super Middleweight 4 rounder was unfolding in an expected way before being abruptly stopped. Apparently, Molik had not read the script and knocked down Virgo in the first. Unfortunately for him, an accidental head butt resulted in a cut over his right eye. He was still very much in the fight in the second when out of the blue the referee walked him to the corner where the doctor decided he was unable to continue with the fight ending in a technical draw at 1:50. The stoppage was by all means premature, as the cut was no worse than Tey Linn Jones’ earlier, unnecessary and disappointing for Molik, the crowd and Virgo himself that did not appear hurt and lost what could have been valuable experience and an opportunity to prove his actual worth had he gone on to win.

Conway boxed beautifully on the back foot in the first two rounds making the aggressive Osaze miss and countering with cleaner straight punches. Osaze was relentless throughout, although showing some signs of frustration, and his pressure saw him finally coming through in the third where he caught Kieron in spurts with hard punches. It was a close bout and could have gone either way, according to what you like more between aggression and ring general ship. In the end, two judges favoured Osaze by 29-28 while one had Conway winning with the same score. Unlucky for Conway who is definitely one to watch, although his style might not be fan-friendly, but Osaze’s desire to win could not be denied.

Phillips was more aggressive in the first round but Dennis definitely heavier handed as he knocked him down with a short right hook. Sean showed a lot of heart and got up to keep throwing leather till the bell. Grant seemed to feel the pace in the second as he tied more often. A draining third round saw an undeterred Phillips relentlessly pressing the action until catching and knocking down his opponent with a left hook. But Dennis did well to hold and survive the round to win a unanimous decision by scores of 28-27 on all three cards in another bout that could have easily gone the other way.

A frustrating night for Pitters, who won Ultimate Boxxer II at Light Heavyweight and is now back at Cruiserweight, against a seasoned campaigner that came only to survive and go home with the cheque. The bout ended in an uneventful 60-54 decision for Shakkan. Pitters is a genuine prospect with true potential but regretfully opportunities have not yet manifested for him after his night of triumph and has now twice fought opposition way below his level.

In the end, the older fighters in the tournament met in the final. It was hard to split them over the first 2 rounds where they really went for each other. Eventually Osaze outlasted Dennis in the third looking fresher, more active and always on the front foot. He set an infernal pace finally hurting Grant with a right uppercut which he followed up with a sustained attack culminating in a knock down. He fancied the job, he wanted it more and he got it. Derrick Osaze is the Ultimate Boxxer champion winning a split decision by scores of 29-27 twice with the third card an unlikely 28-28 draw.

How can you not love this? ❤️@ultimateboxxer winner Derrick Osaze gets to thank his adoring fans and they go mad for their hero one last time! ? #UBIII pic.twitter.com/LfkJlGArxN