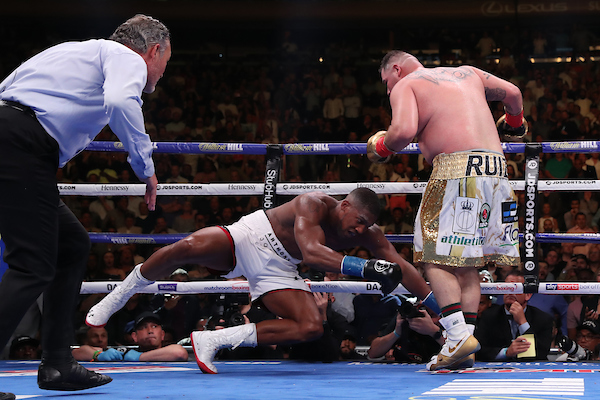 Defeat is not the end of the world. As we know, nearly every boxer loses.

Anthony Joshua, who for the last two years has been at the sport’s highest pinnacle, has suffered the most monumental fall from grace after being stunned in Madison Square Garden by Andy Ruiz Jr, who stopped the formerly unbeaten champion in seven rounds to claim the IBF, WBO, WBA and IBO world titles on Saturday night.

The incredible result provoked several reactions; dismay from his legion of fans around the world and in attendance; joy from his detractors and fans of other rival heavyweights; disbelief from the historians, pundits and bookmakers who had labelled the fight a total mismatch, and confusion from quite literally anyone with even so much as a passing interest in the sport.

And it certainly is confusing; the script which we have all been following so closely for the past 18 months has been well and truly ripped up. It is hard to overstate the enormity of the upset. A torrid third round in which ‘AJ’ was dropped twice was followed by a period of relative calm, before disaster struck in the seventh. Joshua, the self-styled People’s Champion accustomed to demolishing everything in his path, was dropped early in the session.

He rose, but then staggered backwards as Ruiz pursued him, landing punch after punch. Dazed and wheezing, Joshua crumpled to the floor as a left hook removed him from his senses. He looked vacantly at his corner, and turned to face the referee as he raised himself slowly. He failed to convince the referee he wanted to continue; the fight had been beaten out of him. Then the unthinkable; the referee waived the contest off.

The gaps in Joshua’s skill set that we all thought he had filled had come back to haunt him. The comeback from the Wladimir Klitschko knockdown, the 12 rounds points win over Joseph Parker, the settling of nerves after being tagged heavily by Dillian Whyte and Alexander Povetkin, these were all supposedly evidence that ‘AJ’ could take the shot, could dig in deep, could go the distance. It would surely only be someone special, only someone like WBC Champion Deontay Wilder or undefeated former champion Tyson Fury who was worthy of re-examining the man who had stormed his way to the top of the division.

And we continued to insist as much at the press conferences last week. Throughout the build up to Joshua-Ruiz, nearly all of the questions were directed towards Joshua, and nearly all of them were about Wilder, Fury, and potential fights we could see in the new year. By comparison, hardly anyone engaged with Ruiz; no one really cared for his opinion. To some, he was an overweight, out-of-shape tough guy with the payday of a lifetime gifted to him on a plate. To others, he was an unwanted and unworthy late replacement who had fallen short at world level already. To the press in attendance, Ruiz was a bit-part role, a minor member of the ensemble, upstaged by the star of the show who was firmly and irremovably in the spotlight.

Well, Andy Ruiz has stolen the centre stage, and he has stolen the headlines, like he tried to tell us he would. The soft spoken Mexican-American’s gratitude for the opportunity was tempered with an insistent self belief that he could deliver the upset that no-one gave him a prayer of pulling off beforehand, and he proved himself correct in the most dramatic of ways.

The heavyweight landscape has now shifted dramatically. To what extent, no one yet knows. What is clear, mercifully, is that the division is ripe for fresh opportunities in a way it never would have been if Joshua, Wilder and Fury had kept the status quo intact. The promoters of all those involved were never magically going to sit down together and suddenly make negotiations work if Joshua had won.

The tired, inevitable plot lines of social media beef and accusatory conspiracies were running thin. Fans’ frustrations at the failure to make the obvious super fights were growing. The media was starting to baulk under the weight of its constant churning out of theories and fantasy match predictions. The top of the division needed fresh blood, and we finally have that fresh blood coming from the most unusual and welcome of candidates.

For Joshua, defeat is not the end of the world. As we know, nearly every boxer loses. Both Tyson Fury and Deontay Wilder almost lost to one another back in December; it will happen to almost everyone. But his comeback will need to be definitive. Will he emulate Lennox Lewis and avenge the upset losses? Or will he emulate David Price and never truly rebuild back to the lofty heights he has been so accustomed to enjoying? The nature of this come back, and that of the rematch (reportedly in talks for November/December) will truly tell us everything we need to know about Anthony Joshua, but for now, he leaves New York knowing that he has work to do.

As for Andy Ruiz… good for him. He, and his team, should be proud. In the build up, when the media were lambasting his penchant for eating a Snickers bar before the first bell, or when so-called fans were making fun of his stomach and calling him fat, or when other heavyweights were cruelly comparing his physique to an overweight animated scout from a children’s film, he kept his head on his shoulders, stayed humble, and then knocked out the unified, undefeated heavyweight world champion at Madison Square Garden, becoming the first Mexican to win a heavyweight world title. Rebuttals don’t get better than that.