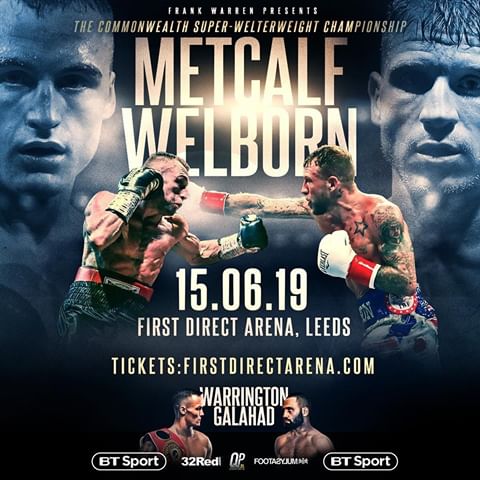 Jason, you’re facing JJ Metcalf for the vacant Commonwealth super welterweight title on Saturday. How you feeling heading into this fight?

“I’m feeling confident, as always. This is the fight game so I think that I’m always quite mentally strong and confident in my own abilities. There’s a vacant Commonwealth title on the line, the first time that I’ve fought for a title that’s been vacant in my career, so that makes a nice change! I’ve always been the underdog in the title fights that I’ve got into against the champions that I’ve fought and, even though this is for a vacant title, I’m the underdog again. For me, it’s just about proving people wrong once again. I’ve got to get a win. There’s been no bad words exchanged between me and JJ. He’ll want to go on and defend the title and go for a British after this, whereas I’ve been there and done that before in my career. For me, it’s about being back amongst these big bills, being in the spotlight and just soaking it up and enjoying it. Hopefully I can get a European shot or a world title eliminator or something like that after this fight. Liam Williams would be a good fight at super welterweight. But, I certainly can’t look past JJ.

What’s your motivation, give that, as you mentioned, you’ve been here before?

Without sounding big-headed, I’ve been here before and done these fights. I’ve been on small hall bills, domestic title fights and world title fights in America. I’ve done my apprenticeship in boxing. But, it’s only been the last two years of my career that I’ve been full time, and I think people have seen the difference that that has made in my career. Boxing has now become my lifestyle and I’m getting a fair crack of the whip in my career now as well. I’m seeing the benefits of that and I’m reaping the rewards.

You were on a Matchroom show against Tommy Langford in the rematch, you fought Jarrett Hurd on an Al Haymon card and now you’re on a Frank Warren card. What’s it like being a free agent in the sport?

I do float between the different promoters. I am with BCB (Black Country Promotions), and if a promoter like Frank Warren can work with myself and them, that would be great. It would be nice to get those big fights laid out ahead of me. But I’ve got to win on Saturday night first of all. I’d really like to win well. I want to get in there and feel physically strong and able. I know that it’s in me. This is the last phase of my career. I do believe that I’ve got it in me to become a world champion, still, or least have another go at it. I’ve had a taste of it and now I want it for real.

How was that taste of it in that fight against Jarrett Hurd?

How did that fight come about?

The Swift team and Al Haymon’s people got in touch with us. They said that they liked my style and the way that I fought against Langford. I think I laid the blueprint on how to beat Hurd and that showed in his last fight (a points loss to Julian Williams). I do think that the pressure of the occasion did get to me a little. I caught him with a good shot and ended up trading with him, which didn’t end well. That’s the differences in levels.

You were in two wars with Tommy Langford. Can we expect the same again on Saturday night?

I think that’s my style. If you hit me, I’m going to hit you back. That’s the style that I think fans like and they pay good money to watch us. I think my fight against JJ might steal the show. We’ve got the styles to do it, and if he’s got the hunger and the grit to be in there against me, then it should be a great fight.

What’s the mentality with that type of all-action style, when you are thinking about life after boxing?

At the end of the day, that’s my style, there’s no point trying to reinvent myself at the age of 33 after 30-odd fights. My family are always very supportive of me. My young girls tell me ‘bring that belt back home, Daddy’ and those things do go through your head when you’re in that ring. When we get in that ring, the niceties will stop. I’ll shake hands with him afterwards. When that bell goes, I mean business and I’ll hit him with everything that I’ve got.