Nathan Gorman Q&A. On Daniel Dubois. “He is a one trick pony really.” 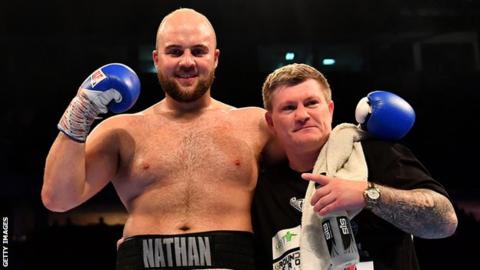 Every form of art is an expression of the values of its times and the Noble Art is no exception. The classic dichotomy of brawler versus boxer has been replaced by a new concept born out of the 21st century obsession with appearance and aesthetics over essence and substance: FIGHTER vs STAR.

The star usually enters the game on the back of a high-profile Amateur career, has promotional support and TV coverage from day one, sports the body of a Greek statue and most importantly must not lose.

Why? Because he/she represents a massive economic investment for promoters and media and an emotional one for the public. The fighter, on the other hand, cuts a less romantic figure as he/she looks just like you and me, lives an ordinary life outside of the ring and enters the narrative as a secondary character in the star’s story. This was the template for former champion Anthony Joshua’s title defence against unheralded Mexican-American Andy Ruiz Jr.

Come July 13, the O2 Arena in London will be the stage for Frank Warren’s “Heavy Duty” card headlined by the challenge for the vacant British title between unbeaten Heavyweightprospects Dubois and Gorman, an intriguing match-up that the latter believes to share similar dynamics to Joshua-Ruiz Jr with himself in the underdog role.

Here is our interview with Nathan, a family man whose day job is fighting, and this is how he sees it.

BB: How did you get into boxing and why did you decide to turn pro?

NG: When I was five years old, my grand dad bought me one of those punching bags that come back at you when you hit them. I fell in love with the thing and started pestering my father to bring me to a gym. He did not want me to box but eventually gave up when I was eight. I started fighting as an Amateur three years later but had only twelve fights over a period of eight years. I have never been a fan of the Amateur boxing system and wanted to turn pro since the first day. And so I did when I turned nineteen.  My manager Mick Carney invited me down to the Fight Factory in Stoke for a pad session with my current trainer Ricky Hatton. Ricky liked what he saw and we went from there.

BB: You have been calling out your opponent Daniel Dubois from the very beginning of your pro career. Why do you need his scalp on your record so badly?

NG: I don’t like the boy, if I have to be honest with you. He was in my weight division in the GB squad so we naturally became rivals. I knew since then we would meet as professionals. I did not call this fight: I predicted it would happen and my prophecy came true. We are both prospects under the same banner and he stands in my way.

BB: Is he your main rival only within Warren Promotions or domestically as well? Who else is out there in the UK?

NG: Domestically as well. Once I took care of him, the winner of Dave Allen vs David Price might be of interest.

BB:  Dubois can’t seem to get fired up about opponents but has been slightly more outspoken in the build-up to this fight. Do you take it as a sign of confidence or of personal dislike?

NG: He has zero personality, it’s just the way it is. He is more outspoken because he is requested to be but I do think this is the first time he feels needle in a fight as well. He might also be overconfident because of the fashion of his last 2 wins, particularly for stopping Cojanu who went the distance against me. I surely hope he is!

BB: Since you mentioned, how do you rate your performances against common opponents Cojanu and Johnson against his?

NG: Both comparisons are irrelevant. Johnson lasts the distance with anybody while Cojanu is just proof that styles make fights. Parker beat Ruiz, Ruiz beat Joshua and Joshua beat Parker. And my style beats Daniel’s. Period.

BB: Were you surprised that Richard Lartey was able to catchhim clean in his last fight?

NG:  No, that’s just the way he fights. He is not a polished boxer and his guard is wide open. There is nothing scientific in what he does. He relies exclusively on brute force and power. He is a one trick pony, really.

BB: Are you planning to outbox him then or still aiming for a knock-out win as previously announced both by you and Ricky Hatton?

NG: I am training for a knock out.  He is the Golden Boy. By that, I don’t mean that the judges would not give me a fair shake. I just want a clear, conclusive win without any controversy or doubt.

BB: What happens next if you win?

NG: I will sit down with my team and decide. I could defend the British title but the landscape is completely open at European level as all talent seems to be concentrated in the UK, so the EBU might also be an option. Or we might pick some Inter-Continental title and go for world level. I don’t know to be honest. I’m only 22 years old. I am not in a hurry and there is only this fight on my mind at the moment.

BB: How does your new stable mate Joe Joyce fit in the domestic scene?

NG: He doesn’t. If he beats Jennings, he is going to move to world level which is where he needs to be at 32 years of age. He needs to move quickly.  I assume he will definitely fight for a world title in 2020 if not by the end of this year.

BB: Do you see any similarities between this fight and Joshua-Ruiz Jr?

NG: Definitely, on many levels. You have the golden goose versus the underdog, the body builder physique against the (his words) “slobby” one, the knock out artist versus the technical boxer…  Also, all pressure is on his shoulder, I’m just someonewho’s coming from Nantwich to beat him. I took Ruiz’s victory as a good omen. It showed it is doable.

BB: How is your life outside of boxing?

NG: I spend all my free time with wife and my little boy. I likecomedy movies, particularly Adam Sandler’s, and enjoy playing darts. If I wasn’t a boxer, I would be a professional darts player

BB: Can you tell us something no one knows about yourself?