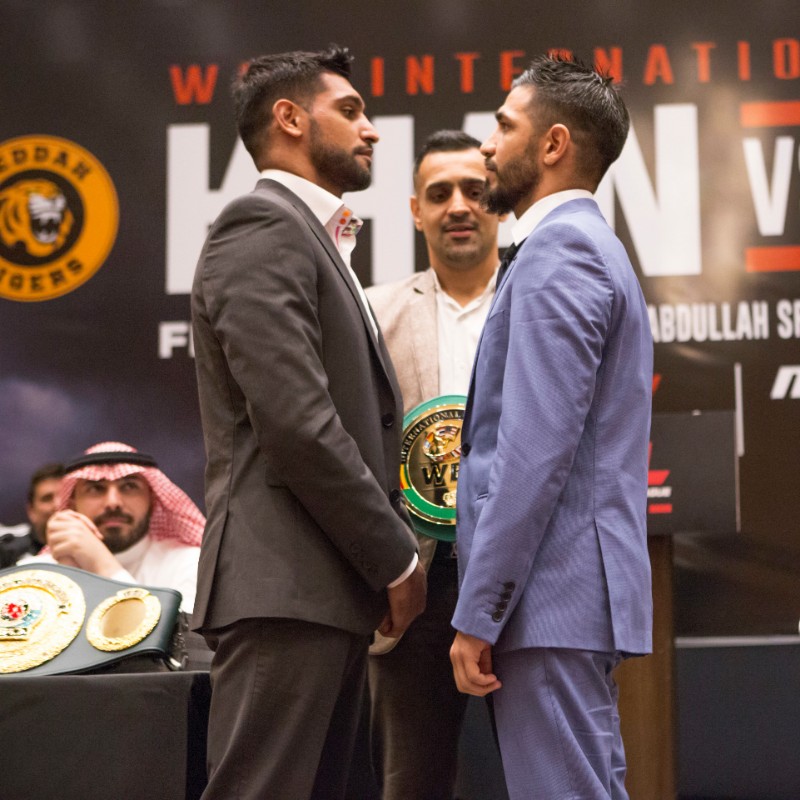 “My fight with Dib is breaking new ground here and I want to put on a real show for the public.”

Amir Khan is promising a special show against Billy Dib this Friday on the massive ‘Red Sea Fight Night’ extravaganza as he looks to make Saudi Arabia the centre of the boxing world.

The Two-Time World Champion makes his big Middle East debut at the King Abdullah Sport City stadium in Jeddah when he takes on Billy Dib for the Vacant WBC International Welterweight Championship, exclusively live in the UK on Channel 5 and 5Spike.

Khan met face-to-face with Dib at the final press conference today at the Jeddah Hilton Hotel and said that this is just the beginning of his plan to bring big-time boxing to the region with the support of the Saudi General Sports Authority.

The fight is being held during Saudi Season that aims to promote the nation as a world leading tourist destination.

“It’s a very exciting time for boxing in the Middle East and myself and my partner Bill Dosanjh are pioneering the move with our Super Boxing League in the region,” Said Khan.

“My fight with Dib is breaking new ground here and I want to put on a real show for the public that have not seen big championship boxing before or have only seen it on TV. I’m sure once they see it and feel the excitement, it will give them a big appetite for it so they can’t wait to see the next show,”

“This is just the start of our plans, we intend to make Saudi Arabia a big-fight capital just like Las Vegas, New York and London and in time I believe that it will be just as big as those cities.”

“Through our Super Boxing League teams the Jeddah Sharks and Tigers we aim to discover and develop the first stars of Saudi boxing and help to create exciting talent in this largely untapped area of potential,”

“Also, we have just opened the Super Boxing Gym in partnership with Fitness Time to bring boxing training initially to eight properties in Saudi Arabia and can expand to 140 properties throughout the KSA that will give incredible access for people to train in boxing.”

Prince Patel and Michell Banquez clash for the IBO World Bantamweight title clash between and there is also the WBC Silver Featherweight Title fight between Dave Penalosa and Lerato Dlamini.