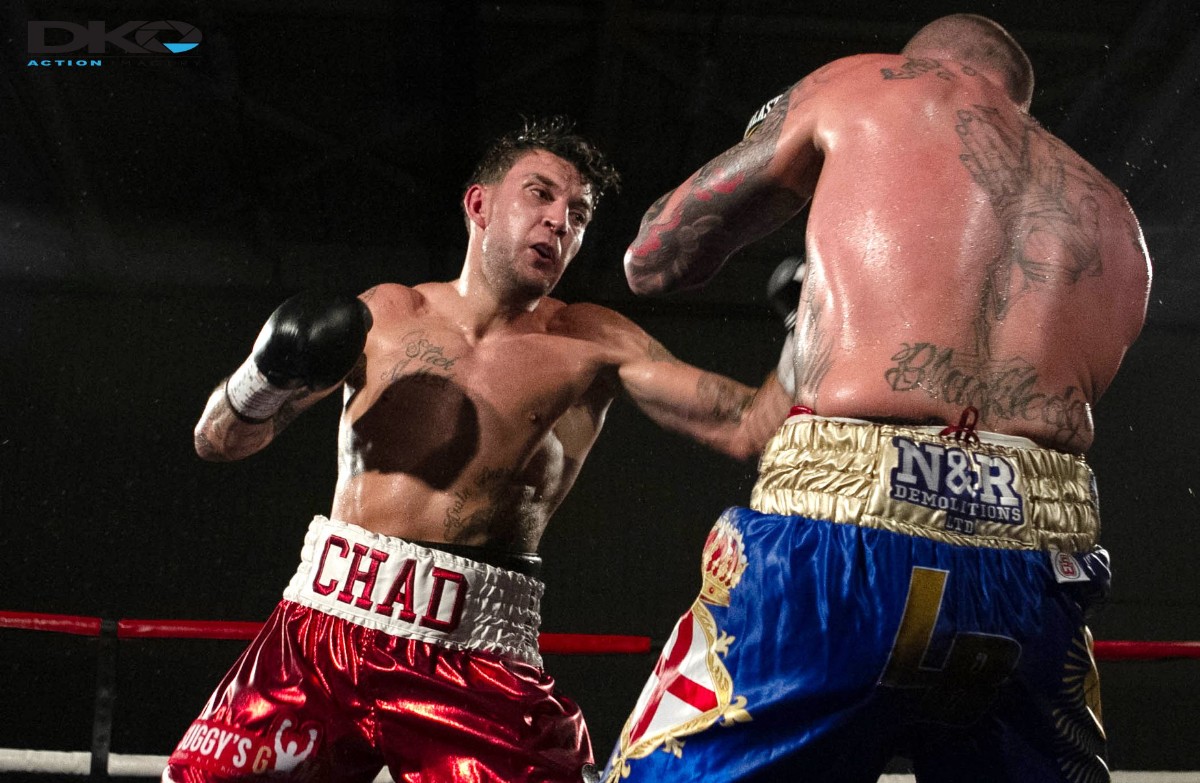 On July 6th at Harvey Hadden in Nottingham a show run by Scott Calow promotions – Chad Sugden put in his most impressive performance to date comfortable outpointing late replacement Luke Blackledge 78-74 over 8 rounds to catapult himself in to the top 10 of the light heavyweight British rankings.. Sugden originally due to contest for the Midlands area light heavyweight title against unbeaten Sebastien Slucarczyk, who was replaced by Blackledge after Slucarczyk sustained a cut. In his biggest step up to date, Sugden passed with flying colours as boxed and moved nicely from the outside against former commonwealth Champion Blackledge

Blackledge was game and kept coming forward though had no answer for Sugdens movement and crisp punches. Sugden switched to the body with combinations before coming back to the head to keep Blackledge at bay. Blackledge had success in the later rounds as Sugden tired though coming out for the 8th Sugden dug deep as he put combinations together to chase a stoppage though a resilient Blackledge hung on to see the final bell to drop a points decision.

Ekow “the Engine” Essuman made a statement with a stoppage over tough journeyman William Warburton. To put it into perspective who had only been stopped twice in 188 fights. Initially Ekow found Warburton difficult to pin down as Warburton used all his experience and wisdom to make it a difficult contest for the English welterweight champion.

Warburton was making it hard to impress against, undeterred Essuman upped the pace in the 4th round pinning Warburton on the ropes and working his body. More of the same followed in the 5th and 6th , along with Essuman landing a crisp right hand to the jaw of Warburton. Warburton remained seated failing to answer the bell for round 7 giving Essuman an emphatic win in this scheduled 8 that will make others sit up and take notice as he awaits his British title fight.

Josh ‘The Diamond’ Gooding made an excellent start to his pro career as he fought Arvynas Trizno in his debut. Well supported gooding looked very relaxed for someone making there bow regularly boxing on the outside before following up with flashy combinations. Goodings hand was raised with the scorecard of 40-36 given.

The show overall continues a recent resurgence of Boxing in Nottingham as Leigh Wood is current commonwealth champion, with Derrick Osaze having won Ultimate Boxxer. With Sugden now announcing himself on the domestic scene and Ekow awaiting a British title bout there will be further big shows in the city.