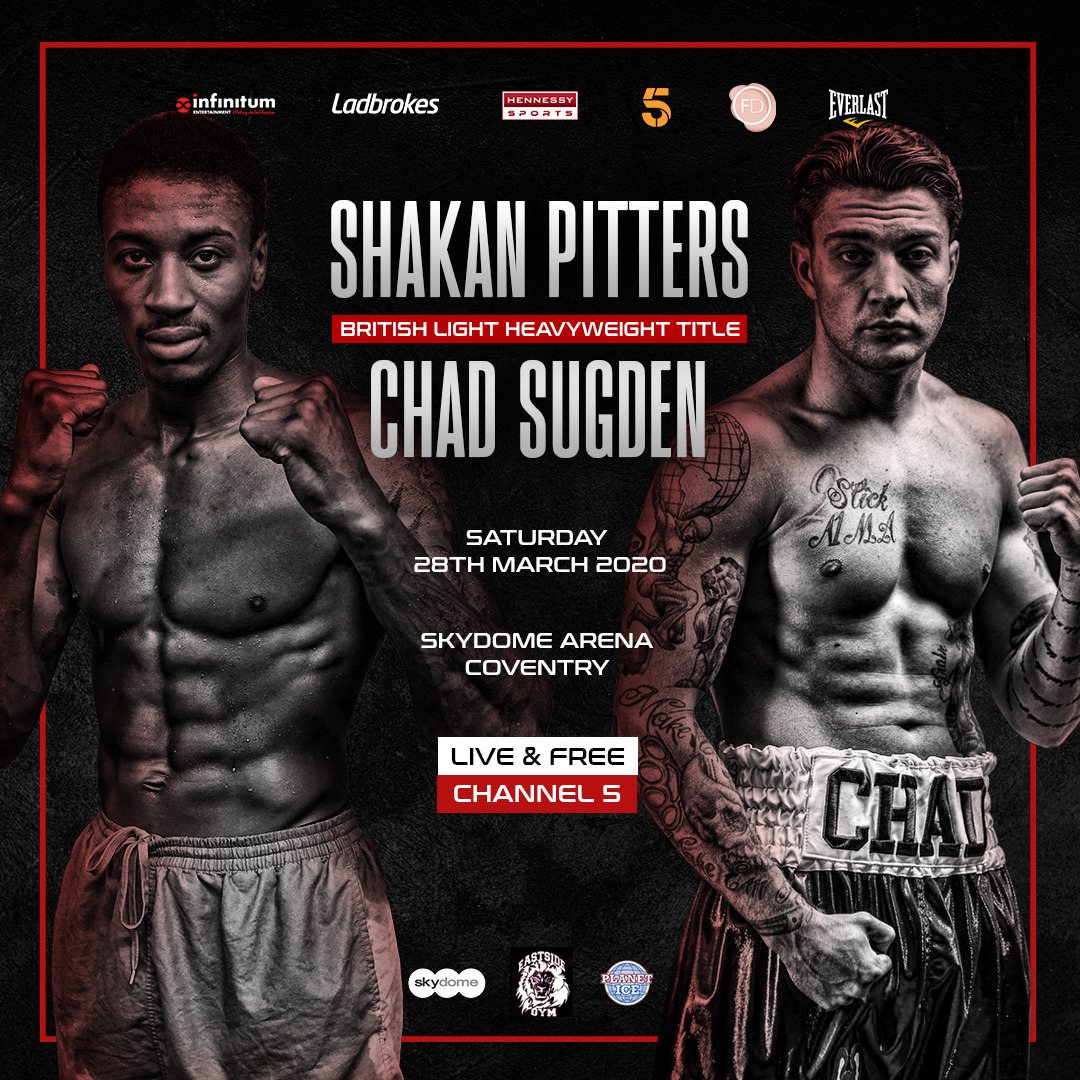 Chad Sugden has received a shock dream shot at the Vacant British Light-Heavyweight title against Shakan Pitters on Saturday 28th March at the Coventry Skydome, exclusively live on free-to-air Channel 5 in the UK, following the withdrawal of original challenger Craig Richards.

Newark warrior Sugden (11-1-1, 4 KO’s) was originally scheduled to feature on the undercard, but was training as if he was going to challenge for the 175-pound title just in case Pitters or Sugden withdrew from the fight and he had to step in. That has now become a reality for Sugden after Richards was ruled out of the title fight due to suffering from a viral infection that has left him unable to train and Sugden steps up to fight the undefeated Pitters in the main event.

All-action Sugden, 25, caused a massive shock when he held the WBA Continental Champion and number 10 World ranked Richards to a draw last December at the York Hall where at just a week’s notice and coming in the underdog he fought the fight of his life to level with Richards and saw his stock rise considerably.

‘2-Slick’ Sugden is thrilled to be challenging for the prestigious Lonsdale belt in the first championship contest of his 13-fight career and now heads into a red-hot Midlands derby showdown against his Birmingham rival. He said, “It’s a dream come true.

“From fighting Richards at one week’s notice and getting a draw and then being constantly in the gym training over Christmas and New Year looking for the next fight, to then getting a slot on the undercard of Pitters versus Richards and to now getting a shot at the British title is the stuff dreams are made of.

“I’m not getting carried away with it though, the reality is I’ve got to now train like never before and make this dream real and win the British title. I’ll go into the fight the underdog and I love that because I know I can cause a huge upset.”

Pitters (13-0-0, 4 KO’s) is not unnerved with the change of opponent from Richards to Sugden and will not let that detract his focus and determination to win the British title.

“I’m just getting on with the job in front of me and winning the British title. I don’t care who is in the ring on the night, they’re getting beat, simple. This is my destiny to become British Champion and nothing is going to derail me. The fight is still nearly five weeks away so there is plenty of time to readjust from Richards to Sugden. He thinks he’s seen chinks in my armour because of my height, but he’ll find out for real on the night what he’s up against.” Said Pitters.

Whilst disappointed, Richards has not lost his opportunity and will fight the winner out of Pitters and Sugden next and aims to be at ringside for the fight to see who emerges victorious on the night.

He said, “After two weeks out of the gym with a flu virus my manager and trainer Peter Sims has made a decision that I objected to, but I understand it’s for my own health to pull me out of the fight against Shakan Pitters for the British Title on 28th March.

“However, due to my GP supplying the relevant medical paperwork to the BBBofC, I’m still the mandatory challenger and will fight the winner of Pitters and Sugden in Coventry where I will hopefully be watching at ringside.”

Promoter Mick Hennessy added, “Sugden’s proved he is more than a worthy challenger for the British title after his tremendous performance against Richards and to hold a quality fighter like him to a draw at a week’s notice was a great achievement.

“We’re sorry to see Richards having to withdraw due to a viral condition, but at least he has consolation in the fact that he will get first crack at the winner for the British title.

“Between Pitters and Sugden, we have a real Midlands derby tear-up between a tall, skilled, box-puncher in Pitters and the rough, tough and relentless Sugden which will make for an intense battle with the prestigious British title on the line. With Richards waiting in the wings, it’s great to see a dearth of talent in the domestic 175 pound division who will square off against each other.”

Presented by Hennessy Sports in association with Ladbrokes, Channel 5, Infinitum and John Pegg, tickets are priced at Standard £40, Ringside £70 and Inner Ringside £100 are presently available through the boxers on the card as the event is almost sold out.

A top quality undercard is headlined with the return of red-hot cruiserweight talent Isaac Chamberlain from Brixton, South London, as he returns to action and back on his pursuit of a world title.

One of British boxing’s most exciting fighters, Birmingham’s Sam Eggington, the former British, Commonwealth, European and WBC International Silver Welterweight Champion, makes his long awaited return to the ring as he targets a World title fight this year.

The card also features some great Midlands matchups that includes a fiery Coventry derby between welterweights Jordan Cooke and Michael Green over six-rounds;

Also on the card will be exciting middleweight prospect Michael Hennessy Jr. from Sevenoaks, Kent, in his fifth professional bout in a six round contest.