On this day: Remembering Joe Calzaghe’s victory over Jeff Lacy 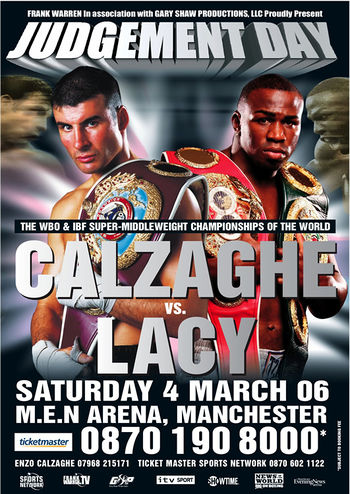 On this day 14 years ago, Joe Calzaghe dominated Jeff Lacy over 12 rounds, we take a look back at one of the most accomplished performances ever by a British fighter.

When undefeated American Jeff Lacy came to the UK to unify the super-middleweight division, he brought with him a fearsome reputation and an aura of invincibility, both of which rapidly perished when he met Calzaghe.

So spectacular was the Welshman’s victory that night, that it arguably overshadowed his impending wins over Mikkel Kessler, Roy Jones Jr and Bernard Hopkins as the defining night in his glittering career.

Almost nine years and 17 title defences after he stunned Chris Eubank to become the WBO World Champion, injuries and a lack of competition meant that Calzaghe had never been given the accolades he truly warranted, however that was about to change.

Billed as ‘judgement night’, many within boxing had dismissed the Welshman’s credentials in the build up to the fight, with some inexplicably describing him as a gatekeeper for Lacy’s inevitable rise to stardom.

In front of a capacity Manchester Arena, under the tutelage of his unmistakable father and coach Enzo, the pride of Wales finally got his stage to shine and he shined brighter than anyone could have anticipated.

At the culmination of the opening round Calzaghe raised his arms aloft. Although he took a right hand, he managed to implement his sensational speed and snapping southpaw jab on Lacy, who was already showing signs of bewilderment at the task that he had taken on in seeking to dethrone the Newbridge native.

In the corner at the end of the third an already marked up and outclassed Lacy was assured by his coach Dan Birmingham that Calzaghe ‘can’t keep up this pace’. That couldn’t have been further from the truth, as he continued to excel and revel in the long awaited limelight he deserved.

The scintillating speed and mesmerising movement that served Calzaghe so well throughout his career, were showcased in abundance that night in Manchester during a faultless display that propelled his legacy to the next level.

Calzaghe’s razor sharp jab sliced open the face of his American counterpart, who was previously branded as the ‘super-middleweight Mike Tyson’. Little did we know, that the flaring up of a recurring wrist injury meant that his lead hand was his only truly effective weapon in the fight.

So significant was the injury, only the unwavering belief of his father who told him to ignore the advice of the doctor and take the fight stopped him from pulling out.

Speaking to BBTV, the former two-weight world champion revealed: “That was the only fight that I was the underdog and I trained so hard for that fight. I was going to pull out two weeks before, as I hurt my hand.

“I was really stressed, at 33-years-old about to fight this guy and I was getting upset, because everyone was writing me off, Boxing News and Boxing Monthly were saying I was going to get knocked out.

“It doesn’t matter who you are as a person, when you read them negative comments about yourself, I thought I’m going to show these guys, that was only motivation and I trained so hard for that fight.

“I got injured two weeks before, so I went to Harley Street and they told me I have to take three weeks off. So, I rang my Dad and told him I was going to have to pull out, he told me ‘Joe, they’re going to call you the biggest chicken’ he knew what to say to get right under my skin, we had a great relationship, great chemistry.”

A smiling Calzaghe continued: “He told me ‘you need to fight this fight Joe, if you pull out this fight it’s not going to come back’. I still remember, in the gym I spoke to my Dad, who although he could fight had never boxed, now considering all these experts were picking him to beat me, my Dad said something really simple.”

“He told me, ‘this guy moves six or seven time and throws one punch, you throw six or seven punches and move once, what’s going to happen? You’re going to beat the living shit out of him and it’s going to be the best fight you’ve ever had.’”

Calzaghe couldn’t emphasise the importance of that moment in the gym enough, as the foresight and faith of Enzo was all that stopped him from withdrawing from his defining night.

Not only did the win open the door to the biggest and most lucrative chapter of Calzaghe’s career, but it also etched his name into British boxing history with one of the most masterful performances of all time by a fighter from these shores.

As a boxing fan no matter how many times you watch the scenes at the final bell, it’s impossible not to succumb to goosebumps, as Calzaghe was joined by his gleeful father in savouring the adulation his exquisite display deserved.