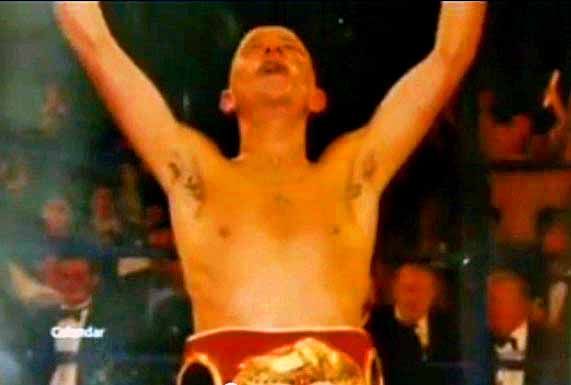 Last week marked the 20th anniversary of Paul Ingle’s New York clash with Junior Jones, where he recovered from a brutal knockdown to defend his IBF World title.

For much of the fight, Jones, who had previously knocked out Marco Antonio Barrera and was known as a power puncher, had no answers for Ingle’s pressure. However, in round nine the fight appeared to swing the American’s way when he sent the champion crumbling to the canvas with a devastating right hand.

It was a shot that was fit to end the reign of many champions, but not Ingle. Such was the toughness and resilience of the Yorkshireman, he rallied back even taunting his opponent at the end of the round.

Previously speaking to BBTV, he revealed that many advised him not to take the fight with Jones, stating: “People told me to get an easier defence, I said ‘no I’m confident I’ll beat Junior Jones’.

“I went to bed every night thinking, I’m going to beat Junior Jones and I’m going to do it at Madison Square Garden.”

That steely determination and unwillingness to quit was something that served him well throughout his career. Two fights prior to the clash in New York, he was dropped in the opening round by one of the division’s most vicious punchers, Prince Naseem Hamed nevertheless it didn’t hinder his efforts in giving ‘Naz’ one of his toughest career tests.

He moved straight from that clash into a world title tilt against grizzled Mexican, Manuel Medina. Ingle came out on top that night, but once again he was forced to overcome adversity as both men hit the canvas in an enthralling 12 round battle.

Having come from humble beginnings in Scarborough, the opportunity to fight at the Mecca of boxing in New York City wasn’t something that Ingle was going to turn down, even if it meant the odds would be stacked against him.

Behind his watertight guard and utilising his dynamic head movement, Ingle was uncompromising in his approach to dictating the pace of the fight. As Jones failed to act upon the advice of Teddy Atlas – who urged his man to force the champion back and put him under pressure.

The nickname ‘The Hunter’ was befitting of Ingle’s style and character, as he put on a clinic in calculated pressure against his highly-rated New York opponent.

Although he rarely took a backwards step, the defensive work of Ingle drew much acclaim as he bobbed and weaved his way into range, where he unleashed tenacious combinations.

These short spiteful shots were sufficient in wearing down Jones, who gradually wilted and deteriorated as the battle grew and the attacks of Ingle continued.

By the 10th round, Jones was all but out on his feet with Ingle piling on the pressure and sensing the finish was within touching distance.

Having been saved by the bell in the previous round, Jones entered the 11th session with his legs still jaded, whilst Ingle came off his stool with a renewed sense of vigour and an elevated expectancy that he was about to claim a historic victory.

Just 30 seconds into the penultimate round, Ingle fired a plethora of powerful shots against the unresponsive Jones, who sank into the ropes. Sky commentator Ian Darke echoed the thoughts of those watching at home – when he jubilantly exclaimed ‘He has done it – Ingle has retained his IBF Featherweight title’.

Nonetheless, the celebrations proved to be premature, as further emphasising just how stacked the deck was against the Englishman on the night, referee Steve Smoger opted to give Jones a standing count, in spite of them not being allowed by the IBF.

Smoger’s controversial decision only served to increase the punishment that was dished out at Jones’ expense, as a resurgent Ingle stormed forward and forced the stoppage just moments later.

Perhaps the greatest testament to Ingle’s performance is that he was under no illusions that everything would be against him, yet he still refused to shy away from the battle.

Whilst many doubted he could get the job done, he knew that if he executed his gameplan and stepped up to the occasion, the night would belong to him.