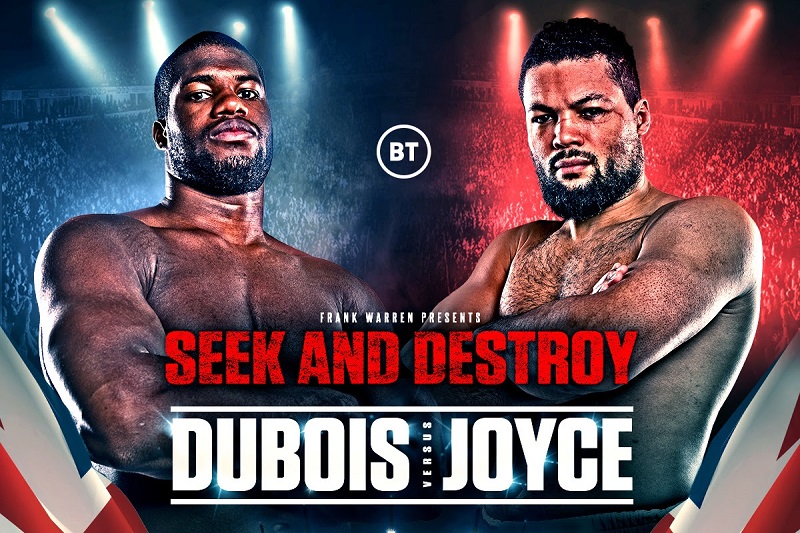 Since Frank Warren’s signing of Joe Joyce in April 2019 and Daniel Dubois‘ 5th round destruction of Nathan Gorman; a clash between the two heavyweights has felt inevitable.

Although it did surprise a lot of fans that Dubois’ team has chosen to take this fight so early in his career. Many will compare this to Joshua vs Whyte, DeGale vs Groves or Chisora vs Fury, which were also 50/50 domestic fights that saw the winner ascend to world level. These fights were all exciting, thrilling and competitive. More importantly, it was not the end of the road for the loser.

DeGale went on to become a two-time world champion, Chisora has challenged for a world title and maintained himself as a top 15 heavyweight for almost a decade and the most recent of the three, Whyte has notched up a plethora of significant victories and is long overdue a title shot.

Frank Warren, the promoter for both fighters describe this as ‘the biggest risk of his career’, however, it is a risk he can afford to take as both boxers are signed with him and Dubois is still very young and can easily be rebuilt.

With over 12,500 tickets being sold in just weeks of promotion prior to the lockdown, Dubois Joyce is a mega British battle that will determine the next worthy challenger to the world title and Warren is adamant that ‘Dubois beats Joshua and Wilder today, the only heavyweight I wouldn’t put him in with right now is Tyson’.

This fight is for the British, Commonwealth and European titles alongside Dubois’ top three ranking with the WBO all on the line. This fight is a virtual eliminator for the world title and the winner will be considered a top 10 heavyweight and look to a world title shot in 2021.

This matchup is too big and too good to take place behind closed doors. A sell-out 02 Arena with 17,000 tickets sold was expected for this fight and a large viewing on PPV.

Dubois describes this as his ‘coming out fight’, ‘the fight that announces me to the world’. Joyce thinks that experience will play a big factor in this fight and his amateur pedigree could be the difference. Most in the trade are struggling pick between the two.

Frazer Clarke and Tyson Fury have sparred both men. The GB Amateur Super-heavyweight predicts ‘a Joe Joyce win after five rounds’ while WBC and Lineal Heavyweight champion Fury admits he’s changed his mind about this fight and believes ‘Dubois can knock Joyce out early, or if it goes past 7 rounds Joyce by late stoppage’.

Matthew Hatton told BBTV that ‘Dubois is the better all-round fighter’ and that he would go with him for that reason.

Joyce and Dubois are too good for either one of them to come at each other all guns blazing hoping to get their opponent out early. It is likely this will have to be a calculated and patient performance.

Dubois will need to box smart behind that jab, while Joyce will need to put effective pressure and come forward with a high guard as he cannot risk being caught by Dubois.

Joyce’s head movement will be key, as he seeks to slip the jab and halt Dubois from finding his range or building up momentum with scoring shots. Dubois will need to use his footwork and straight left to maintain distance from Joyce, not allowing Joyce to smother his shots and reduce the power from them.

Joyce has reunited with Ismael Salas for this fight. Salas is a very experienced and notable trainer having cornered 21 world champions including David Haye, Jorge Linares and Guillermo Rigondeaux. A common theme in all his students is power and with Joyce having gone the distance in his last fight we can safely assume he has gone to Vegas to work on his punching power.

Joyce has the better resume of the two with a points win over a fringe world level fighter in Jennings. Both boxers possess phenomenal power, boasting a combined 22 knockouts in 24 fights. The fight can end at any time with only one punch. And that’s what makes it so exciting.